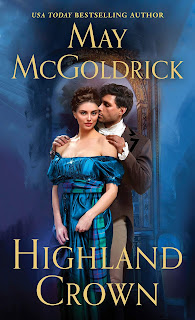 Isabella Drummond is a rarity in Scotland; she is a physician. She is also fleeing from the English Army after being at the scene of a rebellion in Edinburgh, where her doctor husband was brutally killed. With the help of another Scot, who has hidden her half-sister and step-daughter, Isabella finds herself in a remote cottage with an elderly relative of her rescuer who is none too happy to have her. When a ship runs aground off the shores of the small village, Isabella and Jean, her hostess, rescue a badly injured man. Nothing goes right after that.

Cinaed MackIntosh, captain of the Highland Crown, knows that if his cargo gets ashore, it will get into the wrong hands. After he blows up the ship, he is shot and wounded by one of the villagers. When he awakens, he is being tended by a beautiful woman who seems to know what she’s doing. But as she works to help him, a local ruffian shows up at the cottage and Jean attempts to keep him from finding her “guests”.

Forced to flee the cottage, Isabella, Jean, and Cinaed head to Inverness and one of the captain’s relatives. Unfortunately, the English soldiers looking for Isabella are hot on their trail. Will the native Highlanders who have no love for the English help the trio?

HIGHLAND CROWN is the first book in the Royal Highlander trilogy. It sets the stage for a mystery involving Cinaed and a different future for Isabella. Fans of the McGoldricks will love this new series and the well written characters. A great premise and the backdrop of the Highlands – how can a reader go wrong?

I love May McGoldrick’s Scottish historical! This story sounds soooo good that I can’t wait to read it. Would love to win a copy.

Well, here's another new-to-me author with a book that sounds like one I would enjoy reading. Will need to take a closer look at the lady and her books. Would love to be named the winner!