Promo: HOW TO SEDUCE A BAD BOY by TRACI DOUGLASS 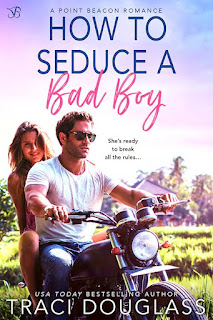 Melody Bryant has heard it all before. Sure, she's the epitome of the stereotype for a librarian. Loves order. Loves rules and deadlines. Loves books. But what she doesn't love is still being a virgin at twenty-four. Unfortunately, the only guy she's ever been interested in turned her down flat. And then left town. Eight. Years. Ago. Ugh. Now her birthday is fast approaching and she just can't take it any longer. She's finding a guy before her birthday in five weeks or she's adopting two more cats and fully embracing becoming "the crazy cat lady." But when her latest date ends in epic failure--everyone thinks of her as the "proper librarian," she realizes what she needs is to ruin her reputation. And she knows the perfect guy to help her: the baddest bad boy in town. This Army vet won't know what hit him...

Mel wouldn’t be in this pristine mess now if her older brother’s best friend had slept with her the night she’d propositioned him eight years ago. But no. Adam had to be all noble and heroic and told her she was special and should wait for the right guy to come along.

“…and what you need to do is get rid of this good girl image you’ve got looming over you like a shroud.” Lilly’s words jolted Mel back to the present. Perhaps her best friend was right. She’d been good until now. Maybe it was time to temper the sweet with a bit of spice.

It was bad enough her parents constantly hounded her these days about giving them grandkids. Now the townsfolk were chiming in, too. Today, for instance, she’d been walking home from work and old Gus MacMillan, the cantankerous owner of Point Beacon Hardware, had stopped sweeping his sidewalk to ask Mel when she was going to “get hitched and have babies.”

Then again, he might’ve been trying to rile her up. She and Gus weren’t on the best terms lately since she’d chewed him out last week about getting his library card then not using it. Still, her reproductive activities, or lack thereof, were none of his business.

Mel sighed and closed her eyes, focusing on a solution.

What she needed was direction. An achievable course of action to lose her virginity by her twenty-fifth birthday—five short weeks from now.

In the end, she really only had one man in mind for the job.

A tall order, but not impossible, given Adam was back in Point Beacon following two tours in the Army. Mel had stopped by his body shop under the guise of scheduling maintenance for her car, to see if Adam still looked the same. He had—all tall, dark, and tantalizingly unavailable. But he hadn’t so much as glanced her way. Then she’d ended up missing her bogus appointment at his garage because of a delivery snafu at the library. She’d yet to speak one word to the guy since his return, even though he lived just down the road. Still, each night she’d hear the sound of his motorcycle, rumbling past her house after he’d gotten off work, and her knees went wobbly picturing gorgeous bad boy Adam with all that roaring power between his thighs.

“Wait.” Her best friend’s tone grew suspicious. “What are you going to do?”

The familiar sound of his Harley-Davidson grew louder in the distance and adrenaline swamped Mel’s system, causing her heart rate to triple. Adam Foster was on his way home and her future suddenly looked a whole lot brighter. “I’ve got a plan. Talk to you later.”

Mel ended the call without saying goodbye, tossed her phone on the coffee table, then headed down the hall toward her front door, doing a quick check of her reflection in the foyer mirror. Same petite figure. Same long brown hair. Same big brown eyes. Tonight, though, her gaze sparkled with new determination. She wasn’t the besotted, naive girl Adam had left behind eight years ago. Now, she was a successful woman with a good job and a home of her own.

She might’ve overstated the whole “having a plan” part, but it was too late now.

She’d flag him down, then take things from there. Improvise. Be wild.

Head held high, Mel walked outside and stood on the sidewalk in front of her bungalow, waiting until the bright halogen beam of his motorcycle headlight approached down the street, then waved her arms frantically. 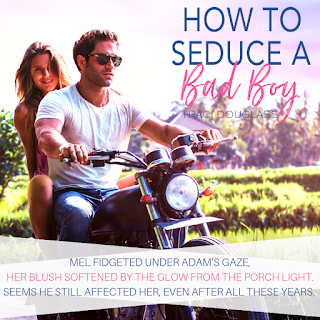 Thanks so much for hosting How To Seduce A Bad Boy on your blog today! Happy Reading! <3