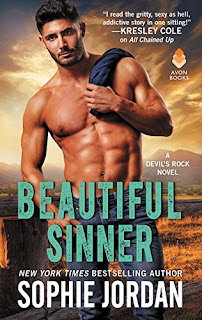 Locked in with the town bad boy . . .
Most women would be scared, but Gabriella’s only worried about resisting Cruz Walsh, who’s even hotter than he was back in high school. Cruz was wrongly accused of the high-profile crime for which he was imprisoned; Gabriella’s desperate for the scoop that will get her career off the ground and get her out of Sweet Hill, where everyone still remembers her as “Flabby Gabby.” Being stuck in a supply closet with Cruz is the perfect opportunity to land an interview. What Bri doesn’t count on is Cruz taking “up-close and personal” to a whole new level.
If there’s a silver lining to the hell Cruz went through, it’s that losing his freedom put everything in perspective. Maybe starting over someplace new would be easier, but after years locked up, Cruz values his family—and his true friends—more than ever. So he’s back home, facing the gossip, dodging reporters . . . and face-to-face with Gabriella Rossi. They’ve both changed: Bri wants a story and Cruz just wants her. Another thing he’s learned? Don’t let a good thing slip away.

BEAUTIFUL SINNER – Sophie Jordan Devil's Rock , Book 5 Avon ISBN: 978-0-06-266659-8 November 2018 Contemporary Romance Sweet Hill, Texas – Present Day The town of Sweet Hill still believes bad boy Cruz Walsh is guilty of murder, even if he was exonerated after someone else confessed. He's back in town after spending years in prison and is trying to start over again. Most people avoid him, though he still attracts women by the droves who are only looking for some hot sex with him. But he's never forgotten the mysterious girl from the night of high school graduation and the hot kisses they shared in the dark. She ran away before he could identify her and she's filled his dreams with visions of hot sex. Gabriella Rossi went to school with Cruz but doubts her remembers her, except maybe for the taunts and bullying she got from other students. She left town as soon as she could but is now back to help take care of her ailing grandmother. One night while attending a high school function for her niece, she ends up locked in a closet—with Cruz. It's there that he finally recognizes Gabriella as the woman who stars in his erotic dreams. He's still the bad boy of Sweet Hill, but does he have a chance with her? Especially after their encounter in the closet leads to a smoldering kiss. Even as an adult Gabriella has to endure taunting. She doesn't have the perfect thin body or the model type looks. But one thing she does have is a good heart and she didn't think twice about returning home to care for her grandmother. Once she is well, Gabriella plans to return to Austin and resume her newspaper reporting career. Despite the kiss in the closet with Cruz, after they are rescued she tries to avoid him. Why would he even look twice at “Flabby Gabby?” But one night he shows up on her doorstep bearing food and good conversation. Gabriella tries to resist the attraction that is growing by leaps and bounds between them, but with his talented hands and mouth on her, she can't push him away. For Cruz, he was found not guilty but people in town still think he murdered a young girl, one who happened to be Gabriella's cousin. But Gabriella is the lone person (outside of his family) who doesn't scorn him. Once he realizes that she's the one from that night, he decides to pursue her—gently. He still doesn't think he deserves happiness, especially with Gabriella, but he wants to pick up where they left off in the closet. Will she give into the passion that burns between them? Is there any chance they can find a future together? BEAUTIFUL SINNER is a tale about redemption and arising from the ashes. Cruz could've started over somewhere else, but Sweet Hill is his home and where his two sisters live. Gabriella has been insulted all her life about her body and it is Cruz who shows her how much he wants her just the way she is. It might have started out as hot lust between them, but soon BEAUTIFUL SINNER turns into a beautiful tale of sweet love. Patti Fischer

Post a comment and you'll be entered in a chance to win a print copy of this book.
Open to U.S. mailing addresses only.
at December 01, 2018

It's been many years since I've read Sophie Jordan's books. I haven't had the pleasure of reading her contemps and this one looks good. Love the cover.