A Perfect 10: SCRIPT OF THE HEART by ROBIN D. OWENS 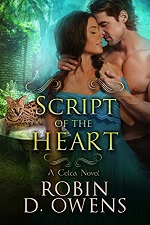 Druida City – 407 years after Colonization
Klay Saint Johnswort, known as Johns, is an actor who is looking for his next big break. His present work,  Firewalker , is due to close shortly, and Johns needs an income. So he's smoozing at the T'Spindle estate at a party where he hopes to get some leads on a job. T'Spindle owns the Primrose Theater and is hosting a gathering of prominent, and not so prominent, theater people. Johns meets up with his friend, and rival, Raz Cherry, and they discuss a new play written by famous playwright Amberose, rumored to have Johns in mind for the lead character. As they leave the party, Raz is assaulted by thieves. Johns and Raz manage to fight them off, but are both slightly injured. T'Spindle's Healer arrives to assess the men and heal them. Johns is immediately enamored of the young woman.

Giniana Filix loves her job as a Healer. She grew up in the theater world as both parents were actors. But her father left to work in Chinju, and her mother spent the rest of her years going from one wealthy lover to another in order to support Giniana and herself. So Giniana wants nothing to do with actors, even handsome, brave ones like Johns. He doesn't hide the fact that he wants to explore a relationship with her, but she has more important things to deal with. First of all, her FamCat, Thrisca, is gravely ill, and only a dangerous and expensive treatment can possibly save her. Second, the cost of that procedure is exorbitant, and Giniana must take side jobs to save for it. She's exhausted, but determined to try and cure Thrisca. An almost out of work actor is not in her playbook right now.

The newly written play by Amberose was given to her agent, who shared it with an actress, and now it's been stolen. It was the only copy, and Johns hopes to discover who has it. In the meantime, he attempts to woo Giniana, certain that he can overcome her fear of commitment to an actor. He is not a fan of Fams, but maintains a grudging, if one-sided, friendship with the grumpy Thrisca, and the tiny FamCat that he rescues and gives to Giniana. Johns knows that Thrisca is all that Giniana has for family, and he understands her need to save her. He also is acutely aware that he needs a job as soon as his play closes.

SCRIPT OF THE HEART is another of the author's wonderfully imaginative Celta novels. I've read all of the fourteen previous novels and enjoy the new world and its amazing inhabitants. The Fams add humor and fun, the fascinating and magical lives of the citizens of Celta take readers to a fantasy place where people can whisk themselves from one place to another, can magically clean, cook, and garden with just a thought, and who get to ride in awesome vehicles! I love these stories, and SCRIPT OF THE HEART is one of the best. Do yourselves a favor and read all of the Celta books. They're beautifully written and you can lose yourselves in the magic.

Email ThisBlogThis!Share to TwitterShare to FacebookShare to Pinterest
Labels: A Perfect 10, Spotlight review