Promo: YOU HAD ME AT COWBOY by JENNIE MARTS 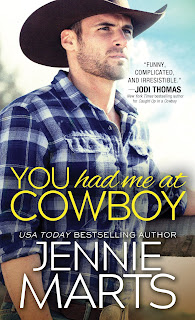 This cowboy is falling hard.
Mason James is the responsible one who stayed behind to run the ranch while his brother, Rock, took off to play professional hockey. Women have used him before to get to his brother—and Mason intends never to get burned again. But after he meets quirky Tessa Kane at his brother’s wedding, Mason discovers he’s ready to take a chance on love.

Tessa Kane is a reporter on the verge of losing a job she desperately needs—unless she’s clever enough to snag a story on the famous Rockford James. But when she falls for her subject’s brother, she’s caught between a rock and a hard-muscled cowboy. What will happen when Mason finds out who she really is?

“Looks like your ‘new friend’ has arrived,” Vivi said, a note of amusement in her tone.
Mason ignored his mom, too busy trying to quell the flurry of sensations that had just taken off in his gut. He pushed out the front door, pausing on the porch to steady himself as she parked her car next to his pickup. His border collie, Theo, raced up to greet her as she stepped from the car.
Tess had on a simple tank top and shorts, but her hair was loose and curled around her shoulders, and when she pulled off her sunglasses and smiled up at him, she took his danged breath away.
He sauntered down the porch steps, trying to act casual since he knew full well that his mother and brother would have their faces plastered to the kitchen window.
A grin broke out on his face as he approached her. Forget the food at the barbecue. Tessa Kane looked good enough to eat.
She took a step forward, and without thinking, he grabbed her hand and pulled her toward the barn. “Come on, I want to show you something,” he mumbled.
“What is it?” she asked as they stepped into the cool shadow of the barn.
He turned to face her, suddenly feeling awkward and shy. “Nothing. My family was just watching us, and it felt weird saying hello to you while they stared at us through the window.”
She smiled. “Understandable.”
He rubbed his hand along the back of his neck. “And also, I’ve had something that’s been bugging me all night, and I thought if I could take care of it right off the bat, we’d just get it out of the way and it wouldn’t be between us all afternoon.”
“Oh…kay. This sounds serious. What is it?”
“It’s about that kiss I gave you…”
Her eyes widened, then she shook her head as she stared at the ground next to his boots. “Oh yeah, that. Of course. You were probably worried that I would get the wrong idea. Or that I would think this was more than just a casual date. I know you just asked me to help with the busybodies, and that I’m just a stand-in. I get it.”
What the hell was she talking about?
“No. It’s not anything like that.” He lifted her chin, tipping her face up to his. “I just feel like maybe it wasn’t my best work.”
A grin tugged at the corners of her lips. “Oh.”
“I think if I had another chance, I could do better. You know, make it a little more memorable.”
She shrugged, looking up at him through her lashes. Her voice was soft, barely above a whisper. “I thought it was nice.”
“Darlin’, I never want a woman to think a kiss I gave her was ‘nice.’”
A sly grin crossed her face, and she pushed her shoulders back and took a step closer. “In that case, I think you’re right.” She lifted her hands and rested them on his chest. “You’d better try again.”
He swallowed, the heat of her hands warming his chest.
She scrunched the folds of his shirt into her fists. “I’m ready when you are.” Her voice lowered, taking on a breathy tone. “But if you’re going for memorable, you’d better make it a good one.”
Holy shit. Flashes of heat darted down Mason’s spine. And through his groin.
He loved the way she looked shy one moment, then her eyes flashed with the spark of a dare the next. He couldn’t figure this woman out, but he liked her.
There was more to Tessa Kane than he’d imagined, and it would seem that she’d just thrown down a challenge. And he was up for it. If the tightening in his jeans were any indication, apparently in more ways than one.
He pulled back slightly, just enough to gaze down into her face. A light glaze of shimmery gloss coated her lips, and her cheeks were pink with color. She stared up at him, her expression holding a mixture of fear and anticipation.
He knew the feeling.
Then she pulled her bottom lip just slightly under her front teeth, and he didn’t know anything—except that he wanted that pretty, pink mouth.
Keeping one arm around her waist, he reached up with the other and slid his hand along her slender neck, feeling her pulse race under his thumb. He held her gaze, his eyes not leaving hers as he cupped her cheek in his palm.
Her lips parted, anticipating his kiss, and his own pulse galloped through his veins.
“Comin’ in hot,” he warned as he tilted her face the slimmest degree, then leaned in and lightly grazed her lips with his.
She tasted like spearmint and vanilla and something else—something that made him feel the same way he did on a warm summer night when the air was perfect, the stars were out, and the sweetest peace would settle in his soul.
A quiet sound escaped her lips, a cross between a moan and a sigh, as he pressed another soft kiss against her lips.
And it was about the sexiest sound he’d ever heard.
Her hands tightened the grip she had on his shirt, and he couldn’t hold back a grin.
“You said to make it good,” he murmured against her lips.
“Is that all you got?” she whispered back, her voice husky and breathless.
Aw hell. Now all bets were off. 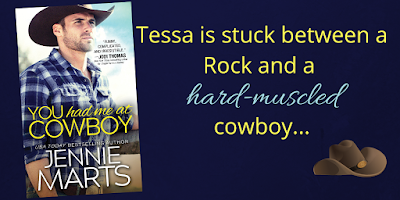 ***
Author Bio:
Jennie Marts is the USA Today bestselling author of award-winning books filled with love, laughter, and always a happily ever after. She is living her own happily ever after with her husband, two dogs, and a parakeet that loves to tweet to the oldies, in the mountains of Colorado.

a Rafflecopter giveaway
at November 21, 2018