Promo: THIS HAPPENED TO JESSICA by MICHELE PARIZA WACEK

Review & Excerpt Tour for THIS HAPPENED TO JESSICA by Michele Pariza Wacek!

From bestselling author, Michele Pariza Wacek comes the next book in her Secrets of Redemption series, THIS HAPPENED TO JESSICA. Becca would like nothing better than to put the past behind her, instead she races against time to uncover the truth about what happened to Jessica before another sixteen-year-old girl is doomed to the same fate. Fans of Nora Roberts’ paranormal suspense novels, THE GIRL ON THE TRAIN by Paula Hawkins and classic Stephen King will devour this psychological thriller with an eerie twist of romantic suspense. 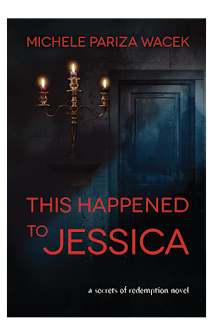 Title: This Happened to Jessica
Author: Michele Pariza Wacek
Release Date: November 27, 2018
Publisher: Love-Based Publishing
Series: Secrets of Redemption #2
Genre: Psychological thriller/mystery/romantic suspense
Synopsis:
Becca would like nothing better than to put the past behind her and focus on making Redemption her home. But what do you do when the past refuses to stay buried?
Becca still can't remember the night sixteen-year-old Jessica disappeared from a party, never to be seen again. Which is bad enough (especially since she was supposedly the last person to see Jessica alive), but it's not the worst …
Strange events are making Becca think there's a link between what happened to Jessica fifteen years ago and the darkness happening now.
With help from her friends and her teenage crush, Daniel, Becca races against time to uncover the truth about Jessica before another sixteen-year-old girl is doomed to the same fate as Jessica.
Add to Goodreads → http://bit.ly/2PvX5Oc
Buy Now: Amazon

Celia was looking around the table with a bewildered expression on her face. "I don't understand. Why does it matter if Jessica is related to Brittany?"
"Because Brittany looks like Jessica," Mia said.
Everyone fell silent. A woman next to us burst into hysterical, high-pitched laughter. Another table over, a group of college-aged guys started chanting as one of their friends, wearing a Wisconsin Badger cap, guzzled a pitcher of beer. Glasses clanked as they were plunked onto tables.
"Not this again," Celia breathed out, picking up her Cosmo and draining it.
"What do you mean, ‘not this again?’" Mia asked, her voice quiet, but with a dangerous edge.
Barry put a hand on Celia's arm. "Nothing. She means nothing." He glared at his wife. Celia kept her mouth shut, but her sour expression spoke volumes.
"Barry, let her talk," Mia said. "What do you mean, 'not this again?'"
"You know what I mean," Celia said. "It's been fifteen years. It's time to let it go."
"Let it go?" Mia said, her voice sounding even more quiet and dangerous. "Let it go? Our friend disappeared! And we don't know what happened to her!"
"First off, I'm sure Jessica left on her own. Her stuff was gone ..."
"But, it wasn't the right ..." Mia tried to interrupt, but Celia kept going. "And even if something did happen, she's gone. Gone!" Celia leaned forward. "I know this is difficult for you to hear, but you're not going to heal unless you, all of you …" here she looked around the table, "… accept it. She's gone. She's been gone for fifteen years. She's not coming back. And no amount of rehashing or talking about it is going to change that."
"She was our friend," Mia said. "Don't you get that? How heartless can you be?"
"I know she was your friend and I know this is painful to hear. No, Barry, stop it. Let me talk. This isn't healthy. It's not healthy to live in the past and that's precisely what everyone here is doing. Someone has to speak the truth and I guess that has to be me. I didn't know Jessica, but I very much doubt she would want all of you still obsessing over what happened to her fifteen years later. Besides, this has all gotten worse since she," she nodded toward me, "came back. We don't need to keep living in the past. Jessica is gone."
"I agree," Rich said, his deep voice cutting across the table. His voice was quiet, but there was something about it that caused everyone to pay attention. Maybe it was because he so seldom talked that when he finally did, it was really noticed. "If we're not going to be honest about what happened that night, then it makes no sense to keep talking about it."
"What aren't we being honest about?" Mia asked.
Rich stared at me, his dark eyes glittering. "If we're honest, we know exactly who to blame for that night."
Did he mean me? I stared at Rich, dumbfounded. "What do you mean?"
His gaze didn't flinch. "You know exactly what I mean."
You were the last person to see Jessica alive. Daniel had told me that. And Daphne. But, he couldn't possibly mean I had anything to do with Jessica's disappearance. Could he? 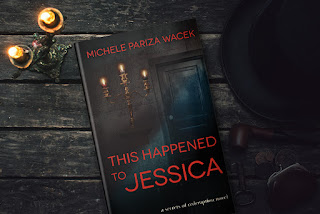 Start at the beginning of Becca’s story with IT BEGAN WITH A LIE!
The first in her brand-new Secrets of Redemption series, bestselling author, Michele Pariza Wacek brings you IT BEGAN WITH A LIE. Becca was hoping for a fresh start for her troubled family, but instead, she is thrust into a mysterious past she barely remembers, one that threatens not only her sanity but her life. Fans of Nora Roberts’ paranormal suspense novels, GONE GIRL by Gillian Flynn and classic Stephen King will devour this psychological thriller with an eerie twist of romantic suspense.