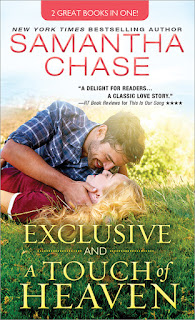 Exclusive
When little-known writer Taylor Scott is granted two weeks to interview a famous reclusive author, it’s the opportunity of a lifetime. So is the chance to rekindle her friendship with Mike Greene, who happens to be the author’s assistant. But as feelings deepen and time winds down, Taylor will have to choose between the story that could launch her career and an unexpected chance at love.

A Touch of Heaven
As Regan Amerson makes the emotional decision to sell their family home, her mother wins a home makeover from a reality TV show. Regan is furious, and jaded host Sawyer Bennett isn’t thrilled either. That is, until he meets Regan—and finds himself enamored by the fiercely independent beauty. She may want nothing to do with him, but Sawyer isn’t one to give up easily…

What People Are Saying about Samantha Chase:
“A fun, flirty, sweet story filled with romance and character growth and a perfect happily ever after.”—CARLY PHILLIPS, New York Times bestselling author for I'll Be There
“Encourages readers to sit down, put their feet up, and enjoy.”—Publishers Weekly for Until There Was Us
“Chase just gets better and better.”—Booklist
“Classic, thoughtful, and as lyrical as the stars.”—Kirkus Reviews for A Sky Full of Stars


A TOUCH OF HEAVEN EXCERPT: 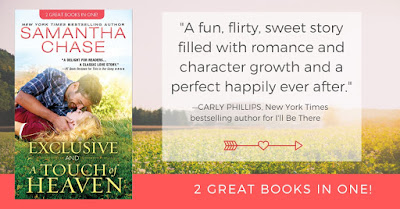