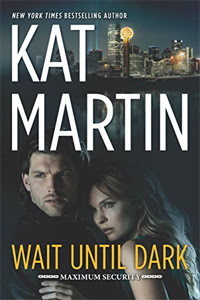 WAIT UNTIL DARK is a digital novella that introduces my new Maximum Security series, set around a private security company in Dallas, Texas.  The story gives you a sneak peek at the private detectives, bail enforcement agents, and bodyguards who work at The Max.
If you read BEYOND DANGER, Beau Reese’s story, you might recall meeting Chase Garrett, the owner of Maximum Security, where female detective, Cassidy Jones, was employed.   The first full-length novel in the series, Chase’s story, THE CONSPIRACY, will be out January 22 of next year--just in time for Valentine’s Day!
In WAIT UNTIL DARK, Jonah Wolfe, a private investigator, has a knack for spotting trouble. When April Vale storms into his office, all his warning signs flash neon red. April’s been accused of murder--but has no memory of how she awoke in her coworker’s bed, drenched in his blood, the deadly bullet fired from April’s own gun.  April must convince Jonah to help her prove her innocence and the clock is ticking.  The real killer is out there--and if they don’t find him before it’s too late, April may be his next victim.


I hope you enjoy WAIT UNTIL DARK and that you’ll watch for Chase Garrett and Harper Winston in THE CONSPIRACY.

About
Wait Until Dark