Promo: RECKLESSLY EVER AFTER by HEATHER VAN FLEET

After the hell I’ve been through in the Marines—in life—there’s nothing I crave more than routine, stability, peace. Until McKenna Brewer walks into my life.

She’s impulsive, fiery, tempting as hell, and everything I dGavinon’t need. But when she offers me a night of no-strings-attached passion, I can’t resist.

When our night together has unexpected consequences, I can’t help but think this might be the perfect opportunity to show McKenna just how much I want her.

The only problem? She doesn’t do forevers. But forever is exactly what I need with her.


A knock sounded at my door. Followed by a very unexpected voice.
“Kenna?”
I jerked up in bed at the noise, scrambling for my pants on the floor. “Uh, just a minute.” Oh my God.
Oh. My. God.
Gavin? He was here? In my house?
Just outside my freaking bedroom door, at that.
“Breathe, Kenna,” I reminded myself as I looked in the mirror to check for possible drool lines.
Once assured that my condition was, well, semi-presentable, I inhaled through my nose once more and opened the door, blinking quickly at what I saw.
Gavin, just like I thought, but with Stargazer lilies in hand.
“Hi,” he said shyly, those dark lashes of his batting lazily against his cheeks.
“You…me…flowers?” I’m pretty sure I was speaking gibberish. Apparently, swoon-sucker me didn’t have the ability to say coherent sentences. Never had I been incapable of words to the point where I stuttered like an idiot. But, there again, never had I been wooed by Gavin St. James.
“They’re lilies.”
He cleared his throat, his green eyes as bright as the leaves with the flowers. I died a little inside at the sight.
And believe me when I say, it was the best way to go. “They’re beautiful.”
“The, um, florist said they mean I missed you. I asked her.”
Heart? Meet belly.
I smiled widely at the gesture and urged him inside. When it came to romance, a man asking for the meaning of flowers before purchasing them was pretty much a woman’s dream. Or at least mine.
The door clicked shut behind me as I turned to face my new guest. There was something incredibly intimate about having him in my room. A step in a direction I wasn’t sure I was meant to take…until that moment.
“Did I wake you?” he asked. “Your sister let me in. Said you were in here.”
Hand in his shorts’ pockets, chin to his chest, Gavin looked downright adorable. His cheeks were pink, barely visible under his beard, and beneath his dark lashes, he stared back at me as though I was a certified goddess.
“No, I, um… I’ve been awake for a while.” I ran my hand over the front of my shirt, then winced at the tiny bulge there. When I looked up, I found him at my dresser, his eyes flitting over the framed pictures of me and my sister, and me and Addie.
“Um, so, wanna do a late lunch or early dinner?” He turned to face me, his back to my mirror and dresser. One of his hands was on the nape of his neck, rubbing feverishly, the other still held the flowers.
Feeling like an idiot for not taking them earlier, I stepped forward and pulled the bouquet from his hands. He smiled as I settled them against my chest, and I heard him chuckle when I pressed them to my nose and inhaled.
“Lunch, huh?” I tipped my head back to look up at him when I was done, licking my lips.
He nodded, eyes twinkling as he stared at my mouth. For a big, bearded, muscular marine, this guy had a secret, softy heart when you got to know him.
“I’m pretty tired.” I teased, setting the bouquet on the dresser. “Kind of had a long night.”
“Someone keep you up late?” His brows lifted in suspicion, but I saw the twitch of his lips all the same.
“Maybe I kept that person up late instead.” I closed the distance between us, our chests just a foot apart.
His lips pulled up in an easy grin. Gavin had the type of presence that always managed to suck me in, no matter what kind of mood he displayed. It was engaging, the way he spoke to others. Short, brief, to the point. And it turned me on in more ways than I could count. I’m pretty sure his lack of communication bothered him more than it did anyone else. But the fact of the matter was, I liked how he was. How he acted. Gavin knew what he wanted, though it took him some time to get what he wanted. In a way, he reminded me of a tiger: slow to pounce, but all claws and bite once he took his prey. That occasional shyness he exhibited only complemented—not to mention complicated—his ways, making him more intriguing.


I’m not sure if I’d ever figure him out completely, but I was going to have a damn good time trying. 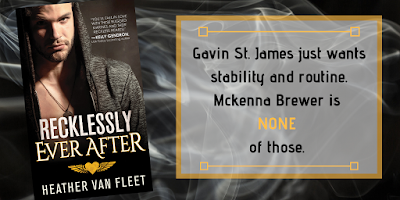