Promo: JUST THIS ONCE by MIRA LYN KELLY 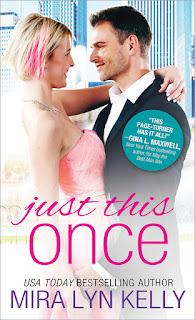 He can’t have her.
So he moves in with her…
What could possibly go wrong?

As heir to a chain of luxury hotels, Sean Wyse III always gets what he wants. So when he sees a freeloading roommate taking advantage of his spunky best friend, Molly Brandt, he doesn’t hesitate to step in. He kicks out the roommate…and moves himself in.

Molly loves quality time with Sean, but spending nights with him one wall away threatens to wake the crush she thought she’d gotten over. A crush Sean knows nothing about, which might be a problem…considering how hard Sean’s been working never to think of Molly that way.


Molly wanted him out of her apartment.
Sean had promised her brother he’d stay.
And now his best friend had started playing dirty to get her way.
“Moll, don’t,” Sean warned through gritted teeth.
Instead of springing off him and retreating to her side of the couch the way he wanted, she cocked her head and looked down at him. “Something wrong, Sean?”
Her knees were on both sides of his hips, and his hands were balled against the cushion so they didn’t fist in the shorts covering her ass. Yeah, something was wrong. And it got even more so when she rested both her hands on his shoulders and sat back on his thighs. Because another inch and she’d be right there.
His molars ground together. He couldn’t think about it. About how close she was. About how it would feel to have her pressed against him like that.
Except he was totally thinking about it, and worse, he was thinking about it while he stared into those bright blue eyes.
And now there was less than an inch between him and Molly figuring out exactly what kind of victory she’d scored with this little stunt. If she knew, she’d do it again. She’d push further. And he’d let her, because as much as he didn’t want to, he liked this.
“You’re playing with fire, Molly. Enough.”
“Am I?” she asked, watching him like she wanted the one thing he knew better than to give her.
It wasn’t real. He knew it.
And even if it was, neither of them would ever act on it. Because Molly wasn’t disposable. She wasn’t someone he could take the edge off with and then walk away from like he did with all the other women. Not even if she kept looking at him the way she was right then.
Her lips parted, and the pink tip of her tongue peeked out to wet her bottom lip.
This was bad.
He could move her if he needed to. But then he’d have his hands on her hips, and what if he touched her thighs? What if he finally found out how it felt to have his fingers splayed wide across them, to feel how strong they were when they flexed? What would happen if his hands slid higher—
Her shriek cut through the fantasy that was rapidly spinning out of control.
“Sean!” she gasped, rising fast from where she’d been sitting back on his thighs, her hands clutching at his shoulders as she shifted in a panic from one knee to the other, which wasn’t helping the situation in the slightest, because all that shifting around while she was practically mashing her chest into his face was sending the wrong signals to a part of him that wasn’t very rational to begin with.
“Molly, stop!” he barked, capturing her hips with his hands and jerking his head back from a place that had been just the perfect amount of soft and sweet—and fuck, how was he going to keep that shit from following him into the shower?
Molly stopped her squirming and, safely out of his erection’s way, glowered down at him, her face a very satisfying shade of beet. “You… That… I… It…” She sucked in a breath and scrunched her eyes closed, apparently giving up on the completely unnecessary recap.
About time the tables turned here. He knew he shouldn’t be thinking about the fact that his thumbs had brushed those sexy hip bones of hers or that the way he was holding her, half suspended above him, was feeding the part of him that liked a little control.
Because this was Molly.
And clearly she’d gotten more than she bargained for.
“Yeah, you straddled my lap, Moll. I’m a guy. What the fuck did you think was going to happen?”
When she opened her eyes again, all that saucy confidence was gone, and a part of him missed it. But the greater part of him recognized the woman looking down at him as the best friend he wasn’t seeing enough of lately. The one who, despite all her hard edges and bluster, had a vulnerable side she didn’t trust too many people.
“Yeah, but…you’re you. And I didn’t think…” Her eyes cut away, and she blushed even harder. Christ, she was so uncomfortable, it was killing him. Even if she’d brought it on herself, he couldn’t watch her squirm. So he said the only thing he could think to make it better.
“Don’t freak out. It’s a physiological thing. Nothing else. You put any woman across my lap like that, and the man downstairs is going to get involved. It’s not about you.”
And shit, not only was that a lie, because it most definitely had been about her, but he also realized what a world-class dick thing it was to say. He opened his mouth to apologize and say he didn’t even know what—but she was nodding like that flimsy-ass explanation had actually made her feel better.
“Okay, so we’ll just forget about it then. Pretend it didn’t happen.”
He sure as hell was going to try, but he wasn’t holding his breath. Because for the first time in a dozen years, he knew exactly what Molly felt like above him. How soft and sweet those modest curves were against his cheek. How easily he could hold her. Guide her—yeah, forgetting about it wasn’t happening any time soon. But pretending? Sean was a master at maintaining a facade.
Only… “This shit stops now, Molly. Keep it up, and you’re going to start something we can’t just forget about and pretend didn’t happen. Is that what you want?”
Pinching her lips between her teeth, she shook her head.


“Me either,” he said, finally releasing his hold on her hips and helping her up. Probably something he should have done immediately. Definitely. “You mean too much to me.” 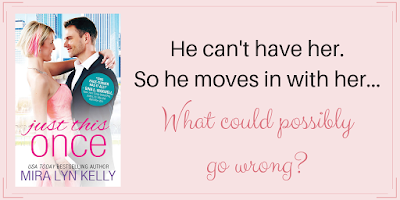