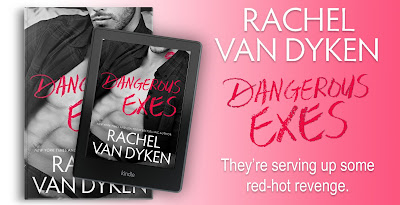 And I think arrogant cheating men are the devil.

Its why I cofounded Dirty Exes PI, to pin down scoundrels with the tip of my stiletto heel.

My names Isla and I have a confession to make.

I think football players are sexy.

This poses a problem since enemy number one just happens to want to take down my entire company with his massive quarterback hands. Did I mention he has massive hands already? Stupid, who likes big hands anyways? Not this girl!

He wants to destroy me.

I want to end him.

Besides, I've come up with a fool proof plan, I'm a woman on a mission, a woman who likes order, and lists, so I've conjured up a list of ten reasons Jessie Beckett is the absolute worse (I may have been drinking wine, but it was the only way to power through).

10. His eyes crinkle when he smiles. I hate it. It's distracting and I think he does it on purpose just to appear friendly to the elderly. He's satan in sheeps clothing.

9. He has too many abs. I know it seems an unusual thing to be upset about, but theres just too much muscle? It's...disgusting. When he's shirtless I look away and I pray. You know, for his digestive system, theres only one way you get that much muscle, protein shakes, gross.

8. He helps orphaned children. I think it's a ploy for attention, theres no way it's genuine.

7. He's too competitive, which means you always have to have your A game.

6. His kisses are too, passionate (trust me I hate that I even know) it's like you're the sole focus of his entire world which would be fine if you weren't getting kissed on camera in front of hundreds of thousands of Patriots fans!

5. He's arrogant. So. Arrogant. The guy doesn't even need words, he just gives off this smug look and sea's of people part or just pass out completely.

4. His megawatt smile makes my face hurt. No botox in that forehead, it's all huge and ready for the next picture op.

3. He's secretive. Which makes him sketchy, he doesn't want people prying and he thinks I'm the biggest one of them all!

2. His pantry is pathetic, no color, nothing exciting, or fun, and his cereal is all, well dont get me started on his cereal. I actually took care of this point, but it still makes my eye twitch.

1. He had the best fake proposal I will probably hear. Ever. Which just makes him the ultimate bad guy, who does that to a girls heart? When she knows full well it's not real? He's a horrible, horrible human being and I can't wait for everyone to see what I'm talking about when they read Dangerous Exes! 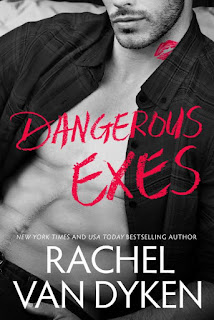 Summary
Isla made one teeny little mistake. Now she and her PI company, Dirty Exes, are being targeted by one seriously angry and furiously sexy ex-quarterback. Jessie freakin’ Beckett. But there’s no way some NFL superhunk is going to take her business away. If only he didn’t make her so hot—and bothered.
Jessie wants payback for a ruined reputation. His plan? Top secret. His hard-to-hide arousal for Isla? Not so much. Especially when they let down their guards and sneak a kiss. Like any juicy scandal, it goes so viral, so fast, that only a good lie can combat the bad press. Mortal enemies in a fling? No way. Um…this is love!
Actually…could it be?
Isla’s not faking it. Jessie can’t. As the game of let’s pretend gets real, Jessie forgets all about revenge. That’s the problem. His plan is already out of his control. Now it could undo everything they’ve been trying to build. Coming clean may be the only thing that can save it.


Rachel Van Dyken is a Wall Street Journal, USA Today, and #1 New York Times bestselling author known for regency romances, contemporary romances, and her love of coffee and Swedish fish. Rachel’s also recently inked a deal for her Wingmen Inc. series—The Matchmaker’s Playbook and The Matchmaker’s Replacement—to be made into movies.


A fan of The Bachelor and the Seattle Seahawks (not necessarily in that order), Rachel lives in Idaho with her husband, a super cute toddler son who keeps her on her toes, and two boxers. Make sure you check out her site, www.RachelVanDykenauthor.com, and follow her on Twitter (@RachVD).