Merry Christmas from your new friends in Holiday, Texas:
The most celebratory town in the South!

When Jinx Jacobs's motorcycle breaks down outside Holiday, Texas, the last thing she wants is to get stuck in the cheery little town, especially during the holidays. The whole place has gone Christmas crazy, but all she has to do is stay out from under the mistletoe—and do her best to keep that unnervingly attractive cop off her back.

Single dad and sheriff’s deputy Cash Walker doesn’t have time for romance, and yet something about the tempting loner twists his stomach up tighter than a tangle of tinsel. He may have finally found the missing piece in his life…but with Jinx so determined to avoid putting down roots, convincing her to stay may just take a Christmas miracle. 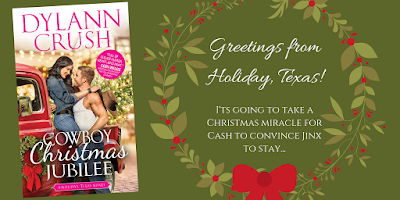 The walk back and forth to the honky-tonk was getting to her. She’d been keeping her eyes open for a spot to camp closer. So far, nothing beat this tract where she’d first parked the bike. The scrubby trees provided a break from the wind, and there was a freshwater stream just a few minutes’ walk through the brush. But she did need to start thinking about a more semipermanent solution. She’d text Jamie today to find out how long she could hold the job in New Orleans. If things looked good on that front, she could bunk with Dixie for a while and still make it to Louisiana before New Year’s.
Her backpack stuffed with dirty clothes and with a grumpy Chihuahua in his soft- side crate, she set off on the walk back to the Rambling Rose. She arrived in enough time to brush her teeth and put on a touch of makeup in the bathroom.
For the next couple of hours, she mixed mimosas and hauled trays of Texas french toast and huevos rancheros to the waiting crowd. The kids wanted to touch her hair, and more than once, she caught a skeptical glance from a surly local or concerned parent. She was about to sneak off to the backroom to take Hendrix out when someone shrieked her name from the doorway.
“Jinx!”
Kenzie barreled across the room, legs and arms flapping like she’d just seen her favorite cartoon character. Jinx caught her right before Kenzie plowed into her. Scrawny arms wrapped around her waist, and a mass of light-brown hair pressed into her gut. Jinx instinctively hugged the kid back.
Kenzie took two steps backward, grabbed Jinx’s hand, and began tugging her toward the doorway. “Daddy told me you work for Aunt Charlie now. Are you gonna have breakfast with us? I like the french toast sticks. Angelo always makes them look like a face and gives me extra whipped cream. Do you like whipped cream?”
“I…uh— ”
“You gotta like whipped cream. Papa sometimes squirts it into my mouth from the can.” Kenzie’s voice quieted as she glanced at the older man standing next to her dad. “Oh, I wasn’t supposed to tell Daddy that.”
“You must be Jinx.” A woman about Jinx’s height enveloped her in a hug.
Awkward. Who in the hell were these people? So far, Texans sure seemed to like to dole out the hugs. All of them. Well, all of them except the tall, dark, and cranky deputy. Jinx stood still, waiting for the moment to pass.
Cash cleared his throat. “Sorry, my family’s made up of huggers. Mom, enough already.”
The words sounded funny coming from the man who couldn’t seem to stand her. He definitely didn’t strike her as a hugger. Or much of a smiler either. The chip on his shoulder seemed to be as big as the double- wide where she’d last seen her own mother.
Cash’s mom backed away. “I’m sorry. It’s just that Kenzie and Charlie have told us so much about you. It’s nice to finally meet you.”
Jinx side-eyed the beaming girl. They’d only met once. What could Kenzie have told them?
Cash gestured to his mother. “Mom, meet Jinx. Jinx, this is my mom, Ann, and my dad, Tom.” He shifted from foot to foot, clearly uncomfortable performing the introductions.
Tom offered a hand, so Jinx shook it. Warm, rough, the way she imagined a rancher’s hands would feel. Charlie had told her she grew up around here with a ranch full of brothers. Lucky for her she had so much family around.
“Can you eat with us? Nana, can she?” Kenzie grabbed Jinx’s hand in one of hers and Ann’s in the other.
“We’d love to have you join us. Kenzie, why don’t you go find a table?” Ann pointed to the far side of the room, at the tables closest to the windows.
Couldn’t they tell she was on the clock? Surely the logo T-shirt or apron ought to provide a built-in excuse. “Oh, I’m actually working right now. I can’t— ”
“Place is about cleared out, wouldn’t you say?” Tom gestured around the mostly empty room.
The brunch crowd had come and gone. A few regulars sat on barstools watching a college football game. Dixie walked by at that exact ill-timed moment.
“You go ahead, Jinx. I’ll cash out the table you’ve got left. Enjoy the break.” She winked, and Jinx vowed to royally screw up her next cocktail order.
“It’s all settled then. Looks like Kenzie found us a table.” Tom guided his wife toward an empty table where Kenzie sat, swinging her legs in a too-big-for-her chair.
Jinx looked up at Cash, waiting for him to make up some excuse. She didn’t want to budge her way into their little family lunch.
Instead, he pulled his mouth into a resigned line. “Shall we?” He gestured toward the table across the room.
Toward his mom and dad.
Toward his kid.
Toward uncharted territory.