Promo: BETWEEN A HIGHLANDER AND A HARD PLACE by MARY WINE

A fierce Englishwoman on the run.
A Highland Laird who needs a proper wife.
And a desire neither can resist.

Athena Trappes thinks she’s in love…until she discovers the scoundrel only wanted her as his bit on the side. Enraged, she does what any spirited Englishwoman would do: set fire to his belongings, incur his dangerous wrath, and flee—immediately. With nowhere else to turn, she seeks freedom in the wilds of Scotland.

Highland Laird Symon Grant lost his wife years ago, and it’s his duty to find another. Athena is not exactly what the clan has in mind for him, but Symon’s heart burns with unexpected passion for the woman who would risk everything to be free. 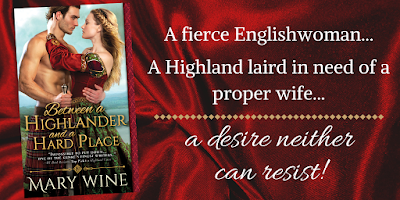 Grant Tower, 1579
“Hiding in me chambers again?” Brenda Grant was a beauty and had a lyrical voice to match. Symon didn’t take any pleasure in it, ripping his bonnet off and throwing it onto a table before he landed in one of the huge chairs she had placed in her receiving chamber just for his visits.

The man had cracked two chairs before she’d ordered new ones made.

“How fortunate that we are first cousins,” Brenda continued as she poured some whisky into a glass and offered it to him. “Other-wise, the gossips would say we are lovers.” Her lips twitched as she tilted her head to the side. “No’ that I am saying no one says such a thing, mind ye.”

Symon glared at her and then at the delicate glass in his hand before tossing the whisky into his mouth and setting the glass on the table.

“I take the look on yer face to mean the bride hunting is not going well?”

Symon drummed his fingers on the table. “I’ve a fine, sharp memory, Brenda. The day is going to come when ye are the one being—-”

Brenda humphed at him. In private, she didn’t much care for how inappropriate interrupting the laird might be. He’d come to her chambers, after all. “I have been wed. Done my duty, and now I will have no more of it.”

“I wed as well.” Symon reached over and refilled his glass. But his taste for the liquor was gone, and he left it sitting on the table as he started to brood, the specter of his wife dragging him down.

More than one member of the clan had claimed they’d seen her ghost in the passageways.

“Do not.” Brenda moved closer to Symon, reaching out to grasp his hand. “Ye must begin living again.”

Symon tilted his head and eyed her. “I am no’ the only one who needs to listen to that advice.”

Brenda didn’t care for the reprimand; however, she acknowledged it as her due. “There is a difference between us. Yer wife was taken by cruel fate.”

“And yer husband was just cruel,” Symon finished for her.

“This castle will always have open doors for you. If the man ye wed is in fact a bastard once he’s won yer hand, there will be sanctuary for ye here.” Symon spoke clear and firmly, a promise in his tone.

A promise she held dearer than all the gold in the world.

Silence hung between them for a long moment. Time enough for them both to feel the chill in the air. They were the last of their line, and the clan looked to them to maintain order by leaving a clear heir. No one wanted fighting over who would be Symon’s successor.

It was more than just securing the blood-line. The castle needed life breathed back in-to it. Hope needed to be kindled before there was nothing left but crumbling stone. Their line was dying; both of them had wed and had no children. And now both of them were widowed as well. Perhaps if Symon’s wife had not died in childbirth, Brenda might allow herself to be free of the burden of making sure their blood continued.

“I will join ye below,” she said softly.

Symon slowly nodded. “So now ye will shame me if I do nae go as well.”

“It is no’ a matter of shame, for we have both faced our duty in the past.” Brenda took a moment to check her appearance in a mirror. Behind her, Symon stood, the pleats of his kilt falling down to just above his knees. “Now ’tis more an act of desperation, for the truth is we are both entombed alive in this chamber. For all that I have no desire to wed again, sitting here is no’ much better.”

Symon grunted as he pulled his cap on. “Wait until you get a look at the men sitting at our high table, sweet cousin. Ye will understand true desperation once ye sit and listen to them trying to auction their kin to one of us.”

“I have no doubt.” Brenda took a deep breath and went through the door Symon held open. “Just as I do nae doubt ye came up here because ye have it in the back of yer head to see me wed first and save yerself from the same fate.”

He made a low noise in the back of his throat.

They were a fine pair and the only kin either had left, so better to be united.