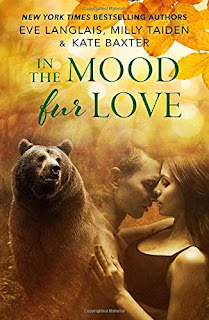 Three hot stories about sexy shifters from a trio of today's hottest paranormal romance authors, headlined by bestselling authors Eve Langlais and Milly Taiden!
Bearing His Touch by Eve Langlais
When Becka manages to escape her kidnapper, she finds herself asking help of the man with the nice brown eyes. Stavros can’t say no, not when he knows Becka is his mate, but he does have one dilemma when it comes to claiming her. He'll have to find a way for her to bear his touch.
Fake Mated to the Wolf by Milly Taiden
Looking for a mate to bring to a party? Wedding? Holiday gathering? Mates Fur Hire is right for you? But what happens when your fake mate ends up being your real one, from New York Times bestselling author Milly Taiden!
The Witch, The Werewolf and The Waitress by Kate Baxter
For centuries, Lowman, Idaho has been Ellie Curtis's prison. A vengeful witch cursed her with immortality and locked her within the confines of Lowman's borders, sealing Ellie off from most of civilization for eternity. She's learned to make the most of it. But when she meets a cocky werewolf who's part of the elite supernatural law enforcement group, all bets are off...
Colin instantly knew that Ellie was his mate, but when he discovers her secret, he's determined to help set her free. But in doing so, he might just lose the one thing he knows he can't live without...

Looking for a little hot shapeshifting romance?
Then this one is for you!