Promo: THE MARQUESS AND THE MAIDEN by ROBYN DEHART

National Bestselling author, Robyn DeHart’s novels have appeared in the top bestselling romance and historical romance lists. Her books have been translated into nearly a dozen languages. Her historical romantic adventure series, The Legend Hunters, were not only bestsellers, but also award-winners, snagging a Reader’s Crown and a Reviewer’s Choice award. She had three releases in 2013 and 2014 will see four more, all set in the popular historical romance Regency and Victorian eras. Known for her “strong dialogue and characters that leap off the page” (RT Bookclub) and her “sizzling romance” (Publishers Weekly), her books have been featured in USA Today and the Chicago Tribune. A popular writing instructor, she has given speeches at writing conferences in Los Angeles, DC, New York, Dallas, Nashville and Toronto, among many others. When not writing, you can find Robyn hanging out with her family, husband (The Professor) a university professor of Political Science and their two ridiculously beautiful and smart daughters, Busybee and Babybee as well as two spoiled-rotten cats. They live in the hill country of Texas where it’s hot eight months of the year, but those big blue skies make it worth it.
Connect: Site | Facebook | Twitter | Goodreads 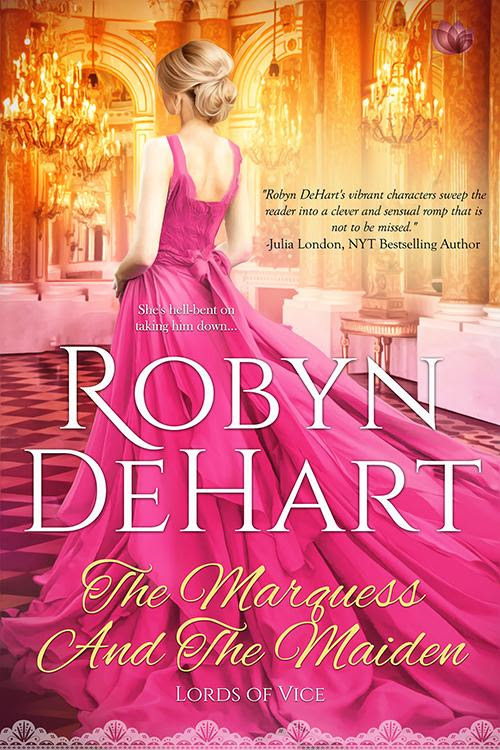 Harriet Wheatley is the mastermind behind the Ladies of Virtue's quest to rehabilitate the gentlemen of the ton. So when it comes to selecting her own target, she knows who to choose: Oliver Weeks, Marquess of Davenport—the most extravagant wastrel in all of London.
Known for his opulent lifestyle, Oliver isn't surprised by Harriet's confrontation. It's obvious Harriet longs for any way to take him down a notch. She says she'll help him find a bride, but he knows it's only because it gives her the excuse to chastise his indulgent ways.
Oliver has good reason for his flagrant overspending, but Harriet will hear nothing of it. So he has no choice but to teach the lady a lesson, even if it means risking his heart to the hard-headed and fiery woman.

Anger rolled off her in hot waves. “You hid in there to spy on me?”
“I did.”
“You don’t even bother to deny it?”
“What purpose would that serve?”
“I don’t know. But this is just like you to hide in wait and spy on me. You’re so damned accustomed to getting whatever you want, whenever you want it.” She shook her head. “You allow that unquenchable greed to dictate every move you make, regardless of how it affects anyone else. Any promises or agreements shoved to the side.”
“This has nothing to do with greed.” Though wanting her certainly did. He wanted her at the moment with such intensity, he was surprised he hadn’t pounced on her yet.
“Of course it does. You have no ability to tell yourself no, no strength of will to walk away from something you want. You were curious about what I was doing, and despite our agreement that you would not ask questions, you came to get precisely what you wanted.”
She doubted his ability to control his urges and desires; he’d show her precisely how much control he had. When this was over, it would be her begging him. “Are you going to tell me what all of this is about?” She was sexy as hell when angry. He gripped the top of his cane tighter to rein in his desire.
She tilted up her head and walked off the mattresses, brushing past him. “I am not.”
“I’m not an idiot, Harriet.” He followed her.
She wiped the sweat off her forehead and neck with a rag. The hair along her nape and face was damp, and it drew him closer.
“I never suggested you were.” She turned to face him and started, not realizing he had closed the distance between them. He took a step forward. She took a step backward.
Granted he hadn’t figured everything out, but he recognized enough of what was before him and, combined with the latest scandal reverberating through Society… it was easy enough to put two and two together.
She exhaled loudly, quite obviously annoyed she’d revealed something to him. “You are a beast.”
He braced one hand on the wall behind her, put his body close enough to her that he could feel the warmth radiating off her skin, smell her subtle floral scent. She boldly looked up at him, no fear. Her eyes darkened, and her lips parted.
“Are you going to kiss me again?”
He chuckled. “Do you want me to?”
Her breath caught. “Of course not.”
“I disagree. I think you do.” He took his hand off the wall and traced a finger down her cheek.
Her breath stuttered.
“Sweet Harriet, I think you desperately want me to kiss you.” His thumb traced over her bottom lip.
She subconsciously dipped her tongue out to wet her lips and instead licked across his finger.
And it took every ounce of his control to not oblige her.
“What are you doing?” she whispered.
“Proving my point.”
She swallowed visibly. “Which is?”
He let his gaze bore into her. Moved his body close enough that she could not doubt his arousal. He ground it against her to make certain.
Her eyes fluttered closed.
“That I can want something desperately and still walk away.” He shoved away from her then and left the room. He had to get some distance between them else he would toss her down on those mattresses and have his way with her.