In Golden Heart® winner Jeanne Oates Estridge’s The Demon Always Wins, sparks fly upward when fallen angel Belial comes to Earth on a mission to corrupt God's favorite. But when widowed nurse Dara Strong instantly recognizes the demon-in-doctor-disguise for the fiend he is, she kicks him out of her clinic. Hell's most successful soul-stealer won't give up so easily though. As the battle between these cosmically well-matched opponents escalates, they will learn that sometimes you have to go through Hell to claim your Heaven. 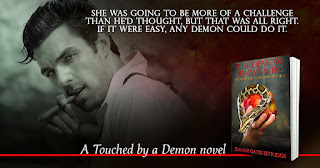 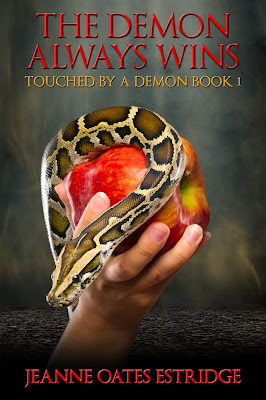 About The Demon Always Wins:

Seven short weeks. After beating his boss at the poker table, ambitious demon Belial must appease Satan, so he takes on a new bet. If he can get God’s champion to curse God, aloud and in public, within the agreed timeframe, Hell gains another soul and Belial earns a coveted promotion to chief executive demon—second only to Satan himself. The demon always wins, but this time the deck may be stacked against him.

Seven long weeks. Widowed nurse Dara Strong is the ace up God’s sleeve. The granddaughter of famous demon fighters, Dara has no problem recognizing Belial as Dr. Ben Lyle. When the demon in doctor’s disguise he appears in her clinic, she kicks him out the door. If she can hold out against the alluring demon till the wager expires, Dara will be safe—but she already has plenty of reason to curse God, and Belial, the most successful soul-stealer in the history of Hell, is not about to give up easily.

Belial may look heavenly, but his soul belongs to Satan. As the battle between these cosmically well-matched opponents escalates, conflict breeds passion and passion transforms into love. Caught between a victory-hungry Satan and an unforgiving God, Belial and Dara discover there may be only one way to ransom the soul of a fallen angel: sometimes you have to go through Hell to claim your Heaven. 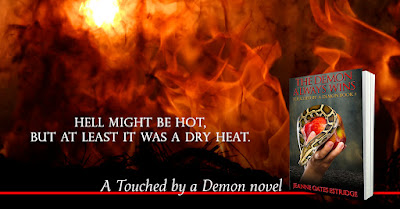 Dara Strong slid her credit card through the reader and waited for the gas pump to authorize her purchase. In the darkness beyond the concrete apron, crickets called sleepily from the grass.
The air was heavy with moisture and mid-September pollen. Her hay fever had gotten so bad earlier she'd taken an antihistamine, leaving her a little fuzzy-headed. On the plus side, she could smell ocean in the warm, damp air tonight.
The gas pump dinged, almost drowned out by the thunder of an approaching motorcycle. It was a Ducati, all black except for the gleaming chrome. The rider, too, was dressed in black—black t-shirt, black jeans, black boots with chains around the heels, black helmet. Even though it was night, he wore his tinted visor down. She didn't usually feel threatened by bikers—most people who owned machines as expensive as this one were lawyers or accountants—but something about the shadowy figure sent a shiver down her spine.
His t-shirt outlined every muscle in his torso. He kicked the stand down and leaned the bike on it, slinging his leg over the saddle in a move that was almost balletic in its grace. His body was so flawless it didn't seem quite human. Without raising his visor, he tugged a leather wallet from his back pocket—no mean feat, given how snug his jeans were—and slid his credit card through the reader.
He unscrewed the gas cap and pushed the button for high-octane fuel. Black fingerless gloves covered his hands, but his forearms were muscular and scattered with dark hair. He lifted the nozzle from its holder and thrust it into the gas tank. Low in her belly, something clenched.
She stared at his hands. The tautness in her belly intensified and a languor swept over her limbs. What would it be like to share a night of love with a handsome stranger, a night without responsibility or regret?
She gave herself a shake. She didn't know what that would be like, but she knew what it wasn't like: her. She didn't even date, much less share nights of passion with anonymous strangers.
It was impossible to see through his visor to tell what he was thinking, or even what he was looking at, but she knew his gaze was trained on her. Beneath his helmet, his throat was like a bronze column. He might have been an alien, come to Earth as a scout for an aggressive race.
The featureless visor remained fixed on her, and, although he didn't move, she felt him willing her closer. Come to me, he seemed to say. Let me show you pleasure beyond your wildest fantasies.
He held out a black-gloved hand and flexed his fingers. Come to me. This time, the command was unmistakable. She took a step toward him. The smell of gasoline and ocean faded away, replaced by the fragrance of petrichor—the smell of rain as it strikes hot cement—fresh and sweet, but with a faint undertone of sulfur. In the back of her mind, an alarm clanged. That smell meant something, something perilous, but she couldn't recall just what. His scent wound around her like the tendrils of a vine, drawing her to him. She took another step. 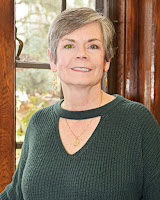 Jeanne Oates Estridge wrote her first short story in third grade, a tale of birth-control-challenged bunnies who named their children in alphabetical order—Alice, Benjamin, Cathy, Dexter—all the way down to baby Zachary. Later that year, when given an assignment to depict what she wanted to be when she grew up, Jeanne drew herself in a floor-length, crayon-blue dress, sitting at a typewriter.

Life has a way of handing us detours, though, and Jeanne wound up earning her degree, and her living, as a computer analyst. She continued to write at night and on weekends, but she could never quite manage to write anything that satisfied her.

But she didn’t give up. In 2012, she returned to college to earn a Master’s Certificate in Creative Writing at the Nora Roberts’ School of Romance Writing at McDaniel College. Working under the mentorship of NYT Bestseller and former high school English teacher Jenny Crusie, Jeanne wrote a paranormal romance that went on to win the 2015 RWA® Golden Heart®.

The Demon Always Wins, the first book of her Touched by a Demon trilogy of paranormal romances, will debut in September 2018.

Jeanne Estridge said…
Thanks for letting me visit!
6:25 AM