Book Giveaway: THE LADY IS DARING by MEGAN FRAMPTON 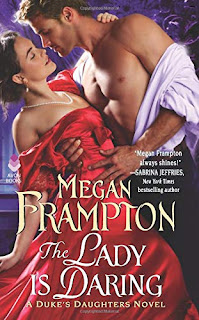 Ida Howlett is the youngest of the Duke of Marymount's five daughters, although he doesn't pay much attention to them. The oldest sister, Della, ran away with the girls' dance instructor, who never married her, giving the girls a scandalous reputation to overcome. Eleanor and Olivia have successfully married for love, but also suffered the effects of some shocking behavior. However, Ida is commonly overlooked or looked-down-upon by society for she shows her intelligence, speaks forthrightly, and frequently goes off on a dialogue about concepts no one is interested in hearing. Often during evening entertainments she is left alone. What she doesn't want is her mother's marital pick for her: the witless Lord Bradford. Since finding a location accidentally imprinted on a letter from Della, Ida is transfixed with discovering the location, Haltwhistle, and finding her long-lost sister. In the pursuit of avoiding Bradford and finding Della, she steals a coach from in front of a friend's home library, where she had been studying atlases to find Haltwhistle, and begins her escapade. What she didn't expect was to inadvertently abduct Lord Carson, which transformed her adventure.

Bennet, Lord Carson, eldest son of the Marquis of Wheatley, first became aware of Lady Ida at his brother's home. Bennet is a hard-working man, keeping his father's estates well managed despite his father's spendthrift ways and always trying to avoid the husband-hunting debutantes. Eleanor, wife to his younger brother Alexander, was one of two Howlett sisters the Duchess of Marymount had tried to force into marriage with Bennet. He escaped those matches, so he knew of Ida, but was unacquainted with her. He finds Lady Ida different. She is not the soft, gentle woman he thinks he wants for a wife. She is intelligent, stubborn, audacious, entertaining, and beautiful. When he decides in a somewhat inebriated fog to take a nap in a nearby coach, she accidentally abducts him; yet he won't leave her to the dangers of a woman traveling alone. It is an odd situation. He can't morally leave her, can't change her mind, and knows their presence together while traveling will ruin her reputation. Soon he also discovers he doesn't want a soft, gentle or compliant wife at all, but convincing Ida might be difficult.

This volume in The Duke's Daughters series is another take on their scandalous adventures. All are good women, but strong, compassionate, opinionated, and somewhat uncaring of society's view of correct behavior for well-bred women. This inevitably gets them into trouble. Ida is very reticent until someone gets to know her, which Carson does on this journey. But each believes the other isn't interested in marriage. Author Megan Frampton provides another captivating road to matrimony

It's the first day of fall and it's time to fall in love with a romance novel. :)

Great review this sounds very good thank you! I'm looking forward to all the Christmas stories coming out soon this Fall. I love her dress on the front cover beautiful, Penney

This sounds very interesting. I love when there is an intelligent heroine in a society where women aren’t expected to be smart. Can’t wait to read this one!

Sounds awesome. I am looking forward to reading all the great historicals coming out this fall.