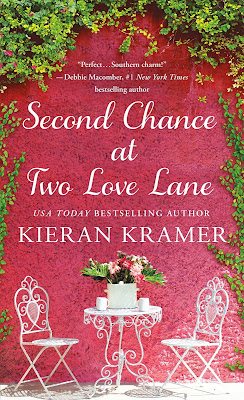 Sometimes love is waiting in the second act...
In her professional career, Ella Mancini plays matchmaker at Two Love Lane but, in her personal life, shetakes the stage at the Dock Street Theatre. Now she has a chance at a new role in a Hollywood movie that happens to be filming in Charleston―one that features a big-name actress, Samantha Drake. Long ago, Ella passed up a major audition while awaiting a marriage proposal. Not only didn’t she get the role; she never got the ring, either. Instead, her boyfriend Hank went on to become a huge film star…leaving her, and all her dreams, behind.
But now Hank’s back in Charleston, cast as the male lead in the same movie Ella’s in. In spite of the dramatic tension off-screen, he and Ella try to stay cool onset. But when their old feelings start to heat up―at the same time leading-lady Samantha tries to play cupid―all bets are off. How can Hank convince Ella, after all this time, that she’s the one he really wants to be with in real life―and that some happy, rom-com endings really can come true?
“Readers who enjoy works by Nora Roberts and Luanne Rice will want to give Kramer a try.”―Library Journal

Ella Mancini once loved—and lost—Hank Rogers, and it’s still painful. They met in New York City, both aspiring actors, and just as his career heated up, they split when he didn’t propose to her as she expected. Ella has built a new life in Charleston running a matchmaking service with her two best friends and acting in the local theater on the side. Hank is now a world-famous star—and he’s about to come to Charleston for a week to shoot a movie with an equally famous star, Samantha Drake.

As SECOND CHANCE AT TWO LOVE LANE opens, Ella becomes friends with Hank’s cousin, Pammy. After Ella temporarily gives up her apartment for a few days while her relatives visit, Pammy invites Ella to stay in her house. Ella figures Hank, since he’s now rich, will be staying in a hotel, but it turns out Pammy also invited him to move in. Now we have Ella and Hank once more together under the same roof. Will the sparks fly? Hank is pleasant and works it so that Ella gets a small part in the movie. Working together reminds her of what she once had—a budding acting career that she essentially gave up for Hank, only to have him want his career more than having her.

Meanwhile, the ladies at Two Love Lane, the matchmaking business, have a difficult client in Roberta. Nothing and no man can seem to please her. But Roberta may be cursed and one of the ladies has a suggestion for Roberta that requires dedication and time. Will it work and will she find a guy?

The reunion of Ella and Hank in SECOND CHANCE AT TWO LOVE LANE is a sweet one as they rekindle the flames.  They first met when both were teens and they endured lean acting years. But once Hank’s career started to take off, loving Ella became less important. She expected a proposal, but what she got was him accepting a job far away. Hurt, Ella broke off their romance. She is insistent that she won’t fall for him again and figures since they’ll both be busy they won’t be around one another a lot. Of course, fate intervenes, first with their both being in the movie, then with everyone around them wanting to push them together. Even Samantha Drake gets in on the act. As readers expect, Hank and Ella are soon locking lips. Will there be a reunion of these one-time lovers? Their romance builds slowly in this tale, yet things heat up once they give into the passion.

Reading SECOND CHANCE AT TWO LOVE LANE, I felt it sometimes got bogged down with all the different characters in this tale. Not only did we see some of Pammy, Samantha, Roberta, Ella’s best friends and the office manager, Miss Thing (what they all call her), but even her relatives made appearances. This also meant there had to be a few other minor storylines, some of which did not get resolved. Will there be more Two Love Lane books? We’ll have to find out, as this is the presumed final tale in the Two Love Lane series.

Hank and Ella have a past that ties them together and they’re perfect for each other. But Ella has made her life in Charleston, while Hank is still active in his acting career. Can they make it all work? A cute and engaging romance, SECOND CHANCE AT TWO LOVE LANE will have readers rooting for Ella and Hank to find their happily-ever-after.