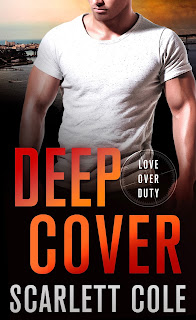 Cabe Moss and his two friends Six and Mac started Eagle Securities just over a year ago, and so far business is booming.  In recent months Six and Mac have found the women who complete their lives.  Cabe had that too, but his fianceé Jess was killed in Afghanistan by a roadside IED two years before.  At a bar on Jess’s birthday, he sees a woman he could be attracted to, but he leaves while she goes to drop off drinks to her friends.  What kind of a man would he be to hook up with another woman when he still misses Jess?  The next day he and his partners are meeting at the FBI building to investigate money laundering in The Lucky Seven Casino.  Cabe is tapped to be a high roller and find out how the casino handles large amounts of money, and there will be an FBI agent undercover as a dealer—who turns out to be the woman from the night before.

Amy Murray is an FBI agent who just transferred from Atlanta to San Diego after accusing a fellow agent of sexual harassment.  She didn’t want to be “that woman” who couldn’t take a little fun, but when it got too much she complained and now she’s in San Diego. Amy specializes in missing women cases after her own mother disappeared over 20 years ago one night while picking up eggnog before Christmas, and was never found.  Hopefully, San Diego will be a new start for her.  Now she has a new case, Helen Foy, who just disappeared.  No friends or family in the area to miss her, no one who seemed to notice she was gone.  But soon she is mixed up with another case with Eagle Securities who are after men who appear to be laundering money in a nearby casino.  Further investigation reveals other women from the same casino are also missing—could this also be a case of human traffickers picking on women with no one to miss them?  Because Amy’s father is a tournament poker player and Amy also has won money during college in tournament play, she is slated to work undercover at the casino as a dealer, and her closest contact also working as a high roller will be Cabe.

Amy again has to deal with sexual harassment at the casino, but has to be careful while she’s undercover.  Cabe is pretending also, and they must watch themselves so they don’t make a misstep, as the lives of women could be hanging in the balance, plus millions of dollars in cash being laundered right under their noses.  This story is as current as the recent headlines and shows how the FBI and others must place themselves in jeopardy every day to do what must be done to keep us safe.

Secondary characters are Six and Mac, Cabe’s partners in Eagle Securities.  There are various bad guys involved in the money laundering, or are they behind the missing women?  Running two major operations in the same place soon gets very complicated.

DEEP COVER is the third and last tale in the Love Over Duty Series, UNDER FIRE (August 2017) and FINAL SIEGE (January 2018) featuring the men in Eagle Securities.  Cabe has major emotional problems with letting go of the memories of his fianceé, and Amy struggles with dealing with a co-worker romantically after what happened in her career previously.  For Amy and Cabe, love and patience are the tricks to move ahead in their lives with their true loves.  We are sorry to see the men from Eagle Securities finish their series, but we can always revisit them in their books.

Back with the next installment in her Love Over Duty series, comes DEEP COVER by Scarlett Cole. For Ex-Navy SEAL Cabe Moss and FBI operative Amy Murray when the sparks begin to fly—and the stakes rise to dangerous heights—are they in too deep? Fans of alpha heroes and workplace romance won’t want to miss this hot romantic suspense.

Synopsis:
ARE THEY IN TOO DEEP?
Ex-Navy SEAL Cabe Moss always comes when called to duty—at all costs. Even though the death of his fiancée nearly destroyed him, Cabe won’t let his past interfere with any work that has to get done. When his latest task pushes him to team up with FBI operative Amy Murray, a fierce beauty with the undercover skills to match, Cabe must admit that, for the first time in years, he wants to do more than just complete their mission together…
Amy was born ready for this assignment, but working side-by-side with the the strong, silent, and frustratingly professional Cabe seems to be the biggest challenge of all. But when the sparks begin to fly—and the stakes rise to dangerous heights—the only thing Amy is left worrying about is how she can resist him. Their lives may be in danger, but their hearts hold the biggest risk of all… 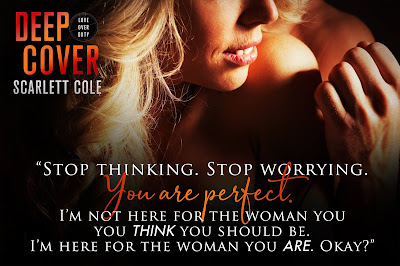 “Where are you hiding my baby girl?” a large voice boomed from the Caesars Palace hallway.
Valentina nodded her head in the direction of the doorway. “You should go find him before he disrupts any of the private tables,” she said with a smile.
Amy wandered to the door and found her Stetson-clad father looking into one of the rooms. “I’m right here, Dad,” she said as she hurried to him and hugged him in the hallway. He smelled of leather and cigar smoke. Maybe it was because she’d lost her mother so many years ago, but it was impossible to explain the feeling of safety that washed over her when she was fortunate enough to spend time around her father.
“Let me look at you,” he said, taking a step away from her. He studied her face. “Humph. San Diego appears to agree with you. I was kinda hoping it wouldn’t.”
“It does. And while you know I can’t talk about what I’m working on, the job does too.” Over her father’s shoulder, she saw Cabe walking toward them with Uncle Clive. She smiled when she noticed that Cabe was wearing a black jacket that fit him to perfection. He’d remembered. “Dad, let me introduce you to Cabe Moss.”
Her father turned and offered Cabe his hand. “Well aren’t you one big son of a bitch? If you’re the guy who has my little girl’s back, I feel better already.”
Cabe’s face broke into a grin. “My pleasure, sir.”
“Sir. I like manners in a man. Military?”
“A SEAL, sir.” Cabe said.
“Well, let’s see if we can’t teach you a thing or two. Which room are we in, Clive?”
As Uncle Clive led her father farther down the hallway, she turned and noticed Cabe’s eyes were on her legs. Her bare legs. “Eyes up here, soldier,” she said, humor in her tone. It made her feel warm inside that he was looking.
“It’s sailor,” he said with a wink. “They’re good-looking legs, and I’m only human.”
It was wrong to let him flirt, it was wrong for her to respond, but for a moment, she wanted to pretend the rules didn’t apply. She reached forward and brushed a piece of lint off the shoulder of his jacket, then smoothed down his lapels. It was an intimate thing to do, she knew. And a risk, given the requirement to stay focused on the job. But hell, a piece of her had always believed in the what-happens-in-Vegas slogan. Here, in the middle of Caesars Palace, the real world didn’t truly exist. “You look good in a suit, sailor.”
Cabe placed his hands on top of hers and squeezed them gently. “You’re killing me, Ames.”
The heat of his fingers burned her inside. Made her want things she had no business wanting from a man she had no business wanting them from. “Why Ames?”
He shrugged. “I don’t know. I just like it. It’s catchy. Makes you sound like one of those TV cop heroines from the seventies.”
Amy looked at their joined hands for just a millisecond longer before pulling them away. “You should go and start practicing,” she said. “If I’m going to work my way into the Lucky Seven Casino’s inner circle, I’d feel better if you were there too.”
“I’ll be there. But rest assured, even if I’m not invited, I’ll find a way to cover your back.” Cabe placed his hand around the back of her neck and pulled her forward gently to place a chaste kiss on her forehead. “I’ll be there, even if you can’t see me. I promise.”

Enter to win A Signed Paperback Set of the Love Over Duty Series!
a Rafflecopter giveaway

The tattoo across my right hip says it all really. A Life Less Ordinary. Inked by the amazingly talented Luke Wessman at the Wooster Street Social Club (a.k.a. New York Ink). Why is it important? Well, it sums up my view on life. That we should all aspire to live a life that is less boring, less predictable. Be bold, and do something amazing. I’ve made some crazy choices. I’ve been a car maker, a consultant, and even a senior executive at a large retailer running strategy. Born in England, spent time in the U.S. and Japan, before ending up in Canada were I met my own, personal hero – all six and a half feet of him. Both of us are scorpios! Yeah, I know! Should have checked the astrological signs earlier, but somehow it works for us. We have two amazing kids, who I either could never part with or could easily be convinced to sell on e-bay.
I’ve wanted to be a writer for a really long time. Check through my office cupboards or my computer and you’ll find half written stories and character descriptions everywhere. Now I'm getting the chance to follow that dream.