Promo: IT BEGAN WITH A LIE by MICHELE PARIZA WACEK

First Look at IT BEGAN WITH A LIE by Michele PW! 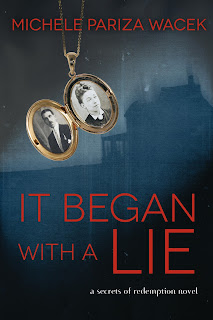 A fresh start. That was what Becca hoped the move from New York to Redemption, Wisconsin would be for her troubled family. A way to get her crumbling marriage back on track, and to bond with her difficult 16-year-old stepdaughter.

But instead of a new beginning, Becca is thrust into the mysterious past she barely remembers, as she is now living in her aunt's house (or what the locals call "The Witch House").

But is the house really haunted? Or is there something far more sinister out to destroy them? 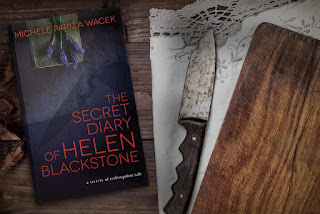 
Enter to win a $10 Amazon Gift Card and One of Ten eARCs of IT BEGAN WITH A LIE!
a Rafflecopter giveaway 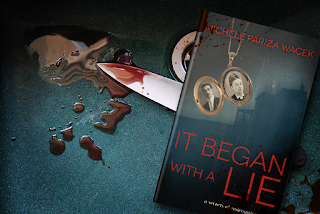 IT BEGAN WITH A LIE Excerpt
Copyright © 2018 Michele PW

"You're right. It's perfect for us. I'm so glad we're here," I said, lying through my carefully pasted-on smile.
I tried to make my voice bright and cheery, but it sounded brittle and forced, even to me. I sucked in my breath and widened my smile, though my teeth were so clenched, my jaw hurt.
Stefan smiled back—actually, his mouth smiled but his dark brown eyes, framed with those long, thick lashes any woman would envy, looked flat … distracted. He hugged me with one arm. "I told you everything would be okay," he whispered into my hair. His scent was even more musky than usual, probably from two straight days of driving and lack of shower.
I hugged him back, reminding myself to relax. Yes, everything is going to be okay. Remember, this move represents a fresh start for us—time for us to reconnect and get our marriage back on track. It’s not going to happen overnight.
His iPhone buzzed. He didn't look at me as he dropped his arm and pulled it out of his pocket, his attention already elsewhere. "Sorry babe, gotta take this." He turned his back to me as he answered the call, walking away quickly. His dark hair, streaked with silver that added a quiet, distinguished air to his All-American good looks was longer than normal, curling around his collar. He definitely needed a haircut, but of course, we couldn't afford his normal stylist, and not just anyone was qualified to touch his hair.
I wrapped my arms around myself, goosebumps forming on my skin as a sudden breeze, especially cool for mid-May, brushed past me—the cold all the more shocking in the absence of Stefan's warm body.
He has to work, I reminded myself.  Remember why we're here.
I remembered, all right. How could I forget?
I rubbed my hands up and down my arms as I took a deep breath, and finally focused on the house.
It was just as I remembered from my childhood—white with black shutters, outlined by bushy green shrubs, framed by tall, gently-swaying pine trees and the red porch with the swinging chair. It sat all by its lonesome in the middle of a never-developed cul-de-sac, the only “neighbors” being an overgrown forest on one side, and a marshy field on the other.
Okay, maybe it wasn't exactly the way I remembered it. The bushes actually looked pretty straggly. The lawn was overgrown, full of dandelions going to seed, and the porch could definitely use a new paint job.
I sighed. If the outside looked like this, what on earth waited for me on the inside?
Inside.
I swallowed back the bile that rose in the back of my throat. It slid to my stomach, turning into a cold, slimy lump.
The house of my childhood.
The house of my nightmares.