Promo: WHEN YOU KNEW by JAMIE BECK

The Top 5 Reasons You Need A Manny by Jamie Beck

Thank you for inviting me to discuss my recent release, WHEN YOU KNEW, the final Cabot novel, which series has followed the siblings of a dysfunctional blended family as they each get second chances in life and love. Gentry Cabot, the youngest sibling and former wild child, carries a chip on her shoulder from being raised by nannies. But when a one-night stand with a stranger whose name she doesn’t know results in an unplanned pregnancy, she needs childcare help pronto. Enter Ian Crawford, a humanitarian EMT looking for a quick injection of cash before he heads back to Haiti. Gentry hires Ian on a temporary basis, and once he moves in, these two opposites start to bring out things in each other that neither expects.

Given her past, Gentry is conflicted about hiring a nanny, but she’s determined to build bridges with her family by working at the family business, so she hasn’t much choice. Within a day or two, the benefits overshadow her doubts. Here is her short list of reasons why you, too, might consider getting yourself a “manny:”

1.     If you, like Gentry, are a single mom, having a male role model in the house is welcome (especially if you have a son);

2.     It’s pleasant to come home to a house that’s been cleaned, and a meal that’s been cooked, by a man. Bending stereotypical gender roles is also beneficial for kids to see;

3.     Men bring a different, adventure-seeking energy to parenting, and children benefit from that balance with a cautious mother;

4.     Having a man (especially a first responder like Ian) in the house can make you feel safer, and can be very helpful if you are raising a less-abled child and need extra strength to manage certain physical aspects of childcare; and last, but not least

5.     If you’re a single mom, there’s nothing wrong with enjoying the company of, and conversation with, a cute guy each day! You never know where it could lead.

While I certainly had fun writing this story, it’s ultimately about family, forgiveness, and finding a connection that makes you the best version of yourself. Here’s an excerpt from when Gentry returns home after her very rough first day back at work. When she comes home, Ian’s smooth handling of things makes her feel like a failure twice over (not that she wants to admit it). Enjoy!

When You Knew Excerpt

Gentry walked through the front door and dropped her bag on the floor without looking at him. Ian watched her shuck off her shoes, which she flung into the corner, where they lay piled atop each other like blue silk firewood.

Expensive shoes, no doubt. He’d learned a bit more about her today when he’d had sixteen free minutes to scroll through her blog. Replete with photos of—and stories about—Colt; it also showcased clothes and accessories, baby and beauty products, and evidenced an endearing mix of enthusiasm, hubris, clever observation, and a fair amount of empathetic commiseration with her followers.

The last few paragraphs of the post she’d written last night had caught his eye.

I swore I’d never hire a nanny. I had my reasons, none of which matter to anyone but me. Still, they mattered to me as much as air and water, and yet … now I’ve gone and hired a nanny.

I could make excuses. He’s a temporary fix. Desperate times and all that blah, blah, blah. But why bother with explanations?

If I begin with a truth—the fact that, like all new moms, I don’t know what the heck I’m doing—then there’s no good reason to stick to preconceived ideas about what I should or shouldn’t do. That kind of mindless adherence to things that sound good in concept but don’t work well in real life won’t help me or my son.

We’re all winging it, so we might as well roll with it and, in this particular case, enjoy the perks of being proven wrong.

He’d wondered what caused her anti-nanny stance to begin with, and then he’d wondered exactly what perks she intended to enjoy.

Now, though, Gentry’s stained shirt and drawn expression warned him to tread with caution.

He braced to be the target of her dark mood. Farrah had given him some practice in this department. He used to point out the harsh realities he’d seen in his work to give her a different perspective on her problems. Turns out that tactic had only made him seem unsympathetic. Today he’d be careful not to make comparisons.

Gentry forced her frown into a weak smile. “Thanks for watching him later than our deal. I promise I won’t make it a habit.”

Six forty-five. Not horribly late. Not like he had anything, or anyone, else waiting on him, either.

She arched her spine, hands clasped behind her back, as she walked farther into the living room. Even a conservative—if stained—top and pencil skirt couldn’t hide that sinfully sexy body when her hips and chest were thrust into that position. Not that he should be thinking about that now—or ever.

Still, he couldn’t help but smile at the contrast between her attire and her ankle and forearm tattoos.

“No problem.” He pointed at the faint beige spot on her blouse. “Rough first day?”

She glanced at her chest; then her chin rose above a half shrug. “Some people are clumsy.”

Some people? A sufficiently vague response. He noticed this about her in the short time they’d spent together. Evasive when it came to admitting to any imperfection or lack of control. He wanted to know what happened, but she craned her neck in search of Colt. “Where’s my son?”

“Asleep.” The little fusspot had kept him hopping. Countless dirty diapers, hours of crying, and two spit-ups. But Ian still managed to keep the place clean and throw something together for dinner. His success made him grin.

She bugged her eyes. “Already?”

“How?” Her posture deflated. “He’s usually ramping up into a good evening fit right about now.”

“Guess I wore him out.” Ian hadn’t considered that she might want to spend time with him. “Sorry. Did you want me to keep him up to see you?”

“No. I’m sure he’ll wake up before long anyway.” As her gaze roamed the spick-and-span condo, it grew even gloomier.

Good thing he’d never needed much praise. He glanced around, unable to guess the source of her mood. When he looked back at her, her dewy eyes stopped him cold. “Is something wrong?”

“Of course not. What could possibly be wrong? Everything here is perfect.” She marched into the kitchen and yanked a fresh bottle of wine from the refrigerator, then paused with the door open. “What’s this?”

She removed the kale and quinoa chicken salad he’d tossed together.

“Dinner.” He rested his hands on his hips, confused. Would this state be his new norm until he returned to Haiti?

The Tupperware landed with a plunk on the counter as tears pooled in her eyes. “Excuse me.”

She brushed past him in a blur of confusing fury and sorrow, racing into the powder room.

He froze. Contrary to her claims last night, maybe Gentry Cabot was crazy. Closing his eyes, he considered some options. A: bolt to his room to avoid what promised to be a weird cyclone of emotion, because if Gentry was anything like Farrah, he was in a lose-lose situation no matter what he said to soothe her. B: attempt to validate whatever problem sent her running. Not his strong suit, but surely the nicer thing to do.

He drew a breath before padding over to the powder room and tapping on the door. “Gentry? You okay?”

She opened it almost immediately, unable to mask her red-rimmed eyes. “Sorry.”

Ian didn’t know a single man that didn’t falter in the face of a teary woman, and he was no exception. “Did I do something wrong?”

“Nope.” She slipped past him and returned to the kitchen, where she filled her wineglass.

She hadn’t bitten his head off or blamed him—a positive sign that perhaps he’d picked the right option. He’d roll with it and try to help her relax.

“It’s nice out.” He approached her with caution. “Go sit on the deck and get some fresh air. I’ll fix you a plate.” 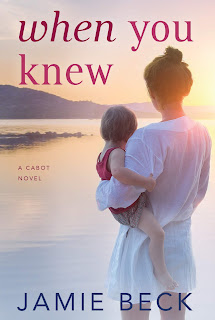 Gentry Cabot’s rebellious life comes to a screeching halt when a one-night stand leads to a sobering new reality: motherhood. Exhausted and overwhelmed, the former wild child struggles to raise an infant on her own. After a lifetime of feeling like the odd Cabot out, Gentry knows that what her son needs most is family. For his sake, she plans to rebuild bridges with them, but first she needs a little help on the home front.
Humanitarian worker Ian Crawford has devoted his life to service. Forced to temporarily return stateside, he’s eager to head back to Haiti to expand the nonprofit he just founded in his late father’s honor. He can’t do that without money, so when Gentry offers a hefty paycheck for a short-term gig as a live-in nanny, he can’t afford to say no. Ian expects to deal with a barrage of privileged problems. What he doesn’t expect is how quickly being a makeshift father transforms him.
Despite his growing attachment to Gentry and her child, Ian still has his dreams, and Gentry wants a full-time dad for her son. When the baby’s father reenters the picture, will Gentry and Ian embrace the family they’ve formed or end up worlds apart?

National bestselling author Jamie Beck’s realistic and heartwarming stories have sold more than one million copies. She’s a 2017 Booksellers’ Best Award finalist, and critics at Kirkus Reviews, Publishers Weekly, and Booklist have respectively called her work “smart,” “uplifting,” and “entertaining.” In addition to writing, she enjoys dancing around the kitchen while cooking, and hitting the slopes in Vermont and Utah. Above all, she is a grateful wife and mother to a very patient, supportive family.

Fans can learn more about her on her website: www.jamiebeck.com, which includes a fun “Extras” page with photos, videos, and playlists. She also loves interacting with everyone at www.facebook.com/JamieBeckBooks.