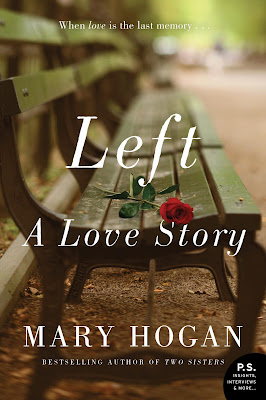 William Morrow is excited to publish LEFT (on sale: June 19 | Trade Paperback Price $15.99) by bestselling author MARY HOGAN. Set against the gorgeous architecture of New York City, LEFT centers on Fay and Paul Agarra, a couple forced to reckon with Paul’s life-altering diagnosis of Alzheimer’s. While the subject matter can be heavy, LEFT is an often humorous story, and a poignant love story and love letter to anyone coping with an unforeseen event that tests their wedding vows to honor in sickness and in health.

What makes this novel so deeply felt, and quite frankly so special, is that Mary’s husband, actor Bob Hogan, is the inspiration for the fictional “Paul Agarra.” As she notes about the genesis of the book: “When I first thought about writing LEFT, I had the idea to create a hybrid: part memoir, part novel. Meaning, I would fictionalize true events that happened in my marriage. The final product turned out to be part truth, part fiction, and part my imagining of how my real life will be in a year or two.”

Paul and Fay Agarra have a happy—though untraditional—marriage. A criminal court judge in New York City, Paul is in his late 60s; Fay, an entrepreneurial artist, is in her late 40s. For the span of their twenty-year marriage, Paul has always been the man Fay can rely on no matter what. But when he inexplicably disappears during their dream vacation in Spain, Fay knows something is terribly wrong.

Soon there are more signs that Paul is beginning to change. Bouts of forgetfulness lead to mistakes in the courtroom. Simple tasks cause unexplainable outbursts of anger. As her husband transforms before her very eyes, Fay copes with her fears by retreating into an imaginary life filled with promise instead of pain. In Fay’s invented world, she envisions herself living a glamorous life free from heartache, with a handsome neighbor she barely knows rescuing her from a future she can’t accept. Sometimes when life falls apart a little fantasy goes a long way. But somewhere between hope and reality an unexpected future—one born out of life’s aching uncertainties—will find its way forward.

Mary’s emotionally rich and vibrant prose color the narrative with a layer of truthfulness that only comes from obeying the age-old adage: “write what you know.” And Mary knows the devastating effects of Alzheimer’s, as her father passed away from the disease and now her husband has been diagnosed with a form of it. A triumphant story about a family who faces the unimaginable and perseveres LEFT is a heartening celebration of the bonds of marriage and a love that overcomes all obstacles.

ABOUT LEFT
In this beautifully crafted novel from the author of the critically-acclaimed Two Sisters, comes the story of a woman who retreats into a fantasy world on New York City’s Upper West Side as she slowly loses her once whip-smart husband to dementia—perfect for fans of Still Alice.

When life falls apart, a little fantasy goes a long way…
It started as a dream vacation in Spain, with Fay and Paul Agarra enjoying all the delights of a European holiday. A respected New York City judge, Paul has always been the man Fay can rely on, no matter what. When he inexplicably disappears from a Barcelona street corner, Fay knows something is terribly wrong. Once reunited, Paul shrugs off the episode as a simple misunderstanding—but Fay suspects her almost perfect life has taken a dark and sudden turn.

Soon there are more signs that Paul is beginning to change. Bouts of forgetfulness lead to mistakes in the courtroom. Simple tasks cause unexplainable outbursts of anger. Fay’s worst suspicions are realized when she learns her husband—her rock, her love, her everything—is succumbing to the ravages of dementia.

As her husband transforms before her very eyes, Fay copes with her fears by retreating into a fantasy life filled with promise instead of pain. In Fay’s invented world, she imagines herself living a glamorous life free from heartache, with a handsome neighbor she barely knows rescuing her from a future she can’t accept.

Poignant and beautifully crafted, Left is an unforgettable tale about life’s aching uncertainties—and a woman who discovers that somewhere between hope and reality, an unexpected future will find its way forward.

ABOUT MARY HOGAN
Mary Hogan is the bestselling author of Two Sisters and the historical novel, The Woman in the Photo. Previous novels include the young adult titles, The Serious Kiss, Perfect Girl and Pretty Face (HarperCollins). Mary lives in New York City with her husband, actor Robert Hogan, and their Catahoula Leopard rescue dog, Lucy. Visit maryhogan.com to find out more!

“A must read for everyone who longs for a page turning novel that holds you in its tender, often hilarious and poignant grip from page one. Loaded with emotion, laughter, surprise and ultimately the message of the fragility of life, Two Sisters will burn through the sisterhood of book clubs like a fever.”
—Adriana Trigiani, bestselling author of The Shoemaker’s Wife
“A mesmerizing journey into the secrets that can split apart brothers and sisters, children and their parents. It’s the perfect read for anyone who knows the way families can hold you up while breaking your heart.”—Lauren Grodstein, author of Our Short History, on Two Sisters
“Gripping and thought provoking, Two Sisters digs deep into emotions getting to the heart of family dynamics.”—New York Journal of Books
“A fascinating tale of two women, generations apart, who defy expectations to find their own paths to happiness and purpose. Awash in historical detail, this book is a real page-turner.”—Melanie Benjamin, New York Times bestselling author of The Swans of Fifth Avenue, on The Woman in the Photo
“A fascinating snapshot of two women separated by time—each compelling in her own right—who together make for a novel so appealing you can’t stop reading. Well-researched history and modern intrigue, original and heartfelt.”—MJ Rose, New York Times bestselling author on The Woman in the Photo
“There is no doubt that The Woman in the Photo is a beautiful work of historical fiction…Hogan does a brilliant job at weaving their two stories together to make one fabulous novel about growing up and discovering who you are in more ways than one.”—New York Daily News
at June 19, 2018