Promo: IN MY SKIN by SHANNON MCKENNA

Review & Excerpt Tour for IN MY SKIN by Shannon McKenna

NYTimes and USA Today bestselling author Shannon McKenna releases the third, standalone installment of The Obsidian Files! IN MY SKIN, features Luke, a renegade supersoldier with blocked memories that only the fiery beauty Dani can help him restore. Fans of JUST ONE TOUCH by Maya Banks, JR Ward’s Black Dagger Brotherhood and Cynthia Eden’s Lazarus Rising Series will devour this thrilling tale of deadly danger and burning desire. 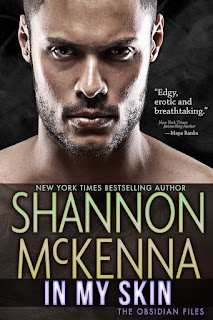 Come back to me …

Luke remembers a few things. Just not his last name, or anyone he ever knew. He knows that he’s a supersoldier, genetically enhanced and loaded up with brain implants. He just escaped from a year-long hell of captivity, and to protect his family and friends from his tormentors, he blocked his memories. Now he needs those memories back, fast … or he and those he loves will die agonizing deaths.

Luke’s dangerous plan to reconnect with his past—and stay alive in the present—has drawn his enemies’ attention to the tough and sexy Dani LaSalle. He’s duty-bound to protect the luscious beauty from the evil pursuing them, but he can’t control the scorching desire she awakens in him.

Dani’s strict routine has been trashed by Luke’s explosive arrival. This rock-hard slab of valiant, smoldering manhood appears out of nowhere, saves her life, spirits her away to his mountain lair and bewilders her with tales of sadistic researchers, enhanced assassins. Is this gorgeous, problematic sex god just plain crazy—or is she? But Luke can do things with his mind that are just as wild as what he can do with that body … and she can’t say no.

And there’s no time to wonder. As their passion burns hotter, Obsidian moves closer ... and Luke and Dani must place their lives and their hearts on the line just to survive …


Review for IN MY SKIN:


IN MY SKIN - Shannon McKenna

Years ago, stray teenagers were kidnapped and put into a top-secret group run by The Obsidian Group.  They used brain stimulation, gene modification, and implants to make them into super soldiers. They can access computer databases in their brains, heal faster than normal, and have kill codes embedded in their brains; three words that will shut their bodies down. The captives eventually rebelled and burned down the research facility and killed many of the researchers. They all went into hiding, but The Obsidian Group is still looking for them...

Luke is looking for an Obsidian courier who is carrying information about a newly captured girl for the group, but the courier goes somewhere different than he is supposed to and dies at the door of a woman named Daniela LaSalle.  When Daniela returns from the hospital after her friend's death, Luke is waiting for her, wanting the information her friend Naldo had given her.  Dani doesn't know what Luke is talking about until several men barge into her home and try to kill them. Three men are killed, and one woman seems to hesitate as Luke recognizes her, and lives to tell her superiors what happened.

Dani and her friend Naldo met at juvie years ago and were friends until suddenly he was gone.  Luke tells her Naldo apparently was also kidnapped and had been experimented on.  Now his information lets them know a young girl has been sent to San Francisco in a shipping crate.  After their attack they take off; Luke realizes the leaders know everything about them now with the information gained from the dead attacker's data banks.

Dani and Luke are on the run, and Luke must insert leads into his brain and try to release his history, history he worked hard to erase so if he was ever recaptured he could not give information to anyone.  Luke doesn't know his younger brother spends hours a day "under" trying to use his mind computer banks to find out anything about his brother's location.

Shannon McKenna lets Luke and Dani tell their story as death follows them as they are running from men who have enhanced soldiers to track down traffic cameras, store videos, and drones to keep track of Luke and Dani. Dani at first thinks something is wrong with Luke and tries to run away until she is quickly found by The Group and must again be saved by Luke. Can she trust that what Luke tells her isn't lies, and he is not crazy?

Secondary characters are Zane and his wife Simone, and all the other remnants of the group that escaped from The Obsidian Group.

IN MY SKIN is the third in the Obsidian Files series, and reading the two previous books would certainly be helpful to find out more of the backstory of what happened to the group and where they are now. This is a compelling story of Luke reconnecting with his brother, and the others that went through the same hell he went through. Don't worry about your wet eyes as Luke and Dani learn what is important in their lives.

The room had one queen-sized bed. If he was lying next to her on it, no way was she leaving that guy alone. Not even after violent trauma and the wound still throbbing painfully in her thigh. Crazy, but so what. She was alive and kicking and in one piece, thanks to him.
She wanted to feel something good and true and excellent. Luke fit the bill.
Bye-bye, cartoon kittens. They could wait for a Netflix and popcorn and sex-with-socks-on night. She was going with the hot red stretch lace. Just as she was. Unretouched.
And in the mood for some intense sexual healing.
Dani wriggled into the outfit. Hoisted her boobs up for maximum lift. Hiked the panties up extra high. She pushed the door open, stepped out and struck a pose.
For nothing. Luke was in a digital trance. One hand manipulated a tablet, the other was tapping madly over the laptop’s keyboard. He’d looped his devices into a chain and his brain was the connector. No attention to spare for sexy lingerie.
But she wasn’t giving up. By no means. “How’s it going?”
“So far so good,” he said. “I’ve pinpointed the location of the second shipment, and the combination for retrieving it. All the backup equipment needed to activate the slave soldier and make it function. Coordinates for the pickup of the wetware are included.”
She tugged at the lacy shoulder strap, adjusting it. Luke still hadn’t noticed what she was wearing. “What the hell is wetware?”
“It’s a Manticore term. It refers to the slave soldier. He could be dormant, possibly suspended in fluid. There’s a file on him. I89VY262. I haven’t gone through that one yet. C drive on the laptop, if you’re interested.”
“I am interested,” she said. “But later.”
“The equipment is in a self-storage unit at an E-Z-U-Store in Serrati Flats, California,” he said. “About a hundred and fifty miles north of here.”
“I suppose you want to get going right away?”
“No, we’ll wait.”
She was startled. “Why? Aren’t we in a hurry?”
“You went through hell today. You need a decent night’s sleep. In a real bed.”
Well, bless his heart. How sweet. The bed part he’d gotten right.
She walked toward him slowly. Swaying her hips. Still nothing. He was locked and loaded in data processing mode. His eyes reflected squares of blue from the screen. A stream of files rolled constantly down it. Like she was peering directly into the data churn in his brain.
He was about to get forcibly reminded that he was not a robot.
She stepped between him and the desk and sat down on his lap.
Luke went rigid. “Holy fuck, Dani.”
She leaned in so her tits were right below the level of his nose. Nipples on red alert from being so close to him. She put her arms around his neck, running her fingers slowly through his hair. Inhaling his hot male scent. “I like the red outfit the best,” she said, her voice low and husky. “Do you?”’

Shannon McKenna is the NYT bestselling author of seventeen action packed, turbocharged romantic thrillers, among which are the stories of the wildly popular McCloud series and the brand new romantic suspense series, The Obsidian Files. She loves tough and heroic alpha males, heroines with the brains and guts to match them, villains who challenge them to their utmost, adventure, scorching sensuality, and most of all, the redemptive power of true love. Since she was small she has loved abandoning herself to the magic of a good book, and her fond childhood fantasy was that writing would be just like that, but with the added benefit of being able to take credit for the story at the end. Alas, the alchemy of writing turned out to be messier than she'd ever dreamed. But what the hell, she loves it anyway, and hopes that readers enjoy the results of her alchemical experiments. She loves to hear from her readers.