Promo: AN AFFAIR WITH A SPARE by SHANA GALEN 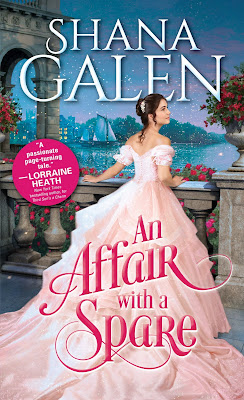 He's turned seduction into an art form...
Rafe Beaumont, fifth son of an earl, uses his irresistible charm with the ladies to glean dangerous war secrets. Now he's putting those skills to the ultimate test: capturing an elusive assassin by seducing his daughter. The problem? She's entirely immune to Rafe's flattery.

Never before has Collette Fortier met a man as attractive as Rafe. But her father's life is at stake, and succumbing to Rafe would be disastrous. But when Rafe turns the tables on her, offering support and friendship instead of a fleeting affair, Collette finds herself tempted in ways she never could have imagined...

In this excerpt from An Affair With a Spare, former soldier and charmer Rafe Beaumont and spy Collette Fortier remove their figurative masks.


That was a rather appealing idea as well. Who the devil cared about restraint and all the rest of that rot? She was in his arms and he wanted her and she wanted him…and if he took her, he might just ruin everything. Because he was not who she thought he was.
at June 26, 2018