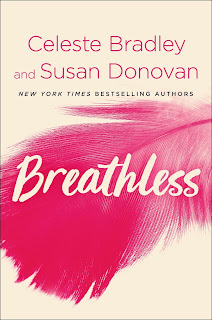 Art Professor Brenna Anderson and art hunter Fitch Wilder are adversaries, but they are after the same thing: to learn about the legendary and mysterious artist only known as The Artist, and the woman who became his muse and subject, the Swan. There are only a few known paintings by The Artist—until another one is unearthed and it’s revealed there are more. Brenna and Fitch meet unexpectedly in London as they begin their search and bicker, though they finally agree to work together. This brings them to Catalonia on the Mediterranean coast of Spain, where they’re searching for the place The Artist and his siren created these beautiful paintings. Could there be more in Catalonia? What are their real names, as no one appears to know their true identities?

BREATHLESS takes us back to the late 1820’s where the Swan was as well known as one of London’s courtesans. But she fell afoul of the wife of one of her lovers and a price was put on her head. A merchant ship captain kidnapped her and she spent a month on the seas, not knowing where she was or what her fate would be. After she is nearly killed during a mutiny attempt, Swan finds herself adrift in a dinghy on the high seas, until she awakens in the bedroom of a mysterious man she only knows as The Artist. Their relationship is not only sweet and intense but sensuous. The Swan provides him with inspiration to paint her in seductive poses. Little did they know that these paintings would become some of the most sought after. But who were they and what happened to them?

Readers are taken on a journey with Brenna and Fitch as they traipse the countryside seeking answers to the mystery of The Artist and the Swan. Along the way, they battle each other, yet it only intensifies the attraction that is growing between them. Interspersed in the pages of BREATHLESS are passages from the letters the Swan sent to a friend in Boston. They provide a background as to how she grew up and how she ended up in Catalonia. There are also chapters devoted to the Swan’s own telling of the story. We are taken back to 1828 and her time in London and on the ship. Her life was hard, yet she ultimately managed to find happiness in the most unexpected way.

Whether you only read contemporary or historical stories, BREATHLESS will soon pull you in and it’s like watching a movie. The characters are beautifully drawn, and the past and present are masterfully interwoven into a splendid tale. Along the way, Brenna and Fitch begin to realize how much alike they are. Will they fall in love? Will readers learn more about the lives of The Artist and his beautiful siren? An intriguing and engaging read, don’t miss BREATHLESS.

In Breathless, bestselling authors Celeste Bradley and Susan Donovan will sweep you away―across continents and centuries, combining the best of all worlds in one unforgettable romantic saga.
She was “the Swan.” London’s premiere courtesan. Men want to be with her. Women loathe her success and yet admire her beauty, her riches, her independence. But when the jealous wife of her lover moves to have the Swan banished from her home on the high seas, she winds up crashed against Spain’s rocky coast with no shoes, no clothes―and no name. Taken in by a tortured, sensuous man known as The Artist, the Swan comes to know the woman she wants to be―her artist’s siren.
When Art Professor Brenna Anderson is in danger of losing her post at Harvard, the rule-following, prim professor is at a loss of how to salvage the shreds of her life. But when a new painting in the mysterious Siren collection is discovered in a dusty old house in France, Brenna does the unthinkable―hops on a plane to uncover the identity of the beautiful, enigmatic woman who is the subject of the paintings.
There’s just one hitch―the frustrating, irritating, bold and beautiful art hunter Fitch Wilder is also looking for the Siren. He’s been a thorn in Brenna’s professional side for years, but when their individual quests lead them to team up despite being enemies, a whole new sumptuous world of art and culture opens up for the two of them. And with it, they enter a realm of passion and love…

Happy Sunday!
What are book are you reading?
Post a comment and you'll be entered in a chance to win a copy of this book.
Open to USA mailing addresses only!

Hi Patti! This one sounds like a great book. Your review has me intriqued! I will put this one on my wish list.

I just finished Tattered by Devney Perry, it is an awesome book! If you haven't read anything of hers you should. All of her books are very good. She has become an auto buy for me.

Thanks again for all the great reviews and giveaways you do.