Promo: UNTIL THERE WAS US by SAMANTHA CHASE 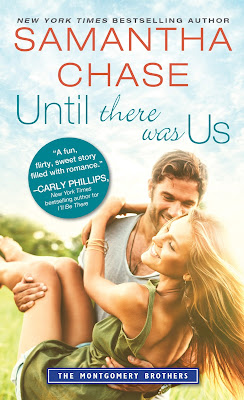 Megan Montgomery has always been careful…except that one time she threw caution to the wind and hooked up with a sexy groomsman at her cousin's wedding. But that was two years ago—so why can't she stop thinking about Alex Rebat?

Alex has been living the good life. He loves his job, has a great circle of friends, and doesn't answer to anyone. The problem? There's only one woman he wants and she ran out on him after one amazing weekend. But now that Megan's coming back to town, Alex hopes he can convince her to take another chance on him…and on a future that can only be built together.

With a nod of agreement, everyone sprang into action, and as Alex headed toward the guest room, he had to remember to breathe. He didn’t miss the fact that she had practically dashed from the dinner table—no doubt to get away from him—but she couldn’t avoid him forever.
Hell, he wasn’t even going to let her avoid him for another five minutes.
“Hey,” he said softly as he ducked his head into the room. Her big brown eyes went wide at the sight of him, and those soft pink lips parted as she gasped.
“Oh! I…I didn’t think anyone was ready to start in here yet. I thought I’d…um…” But her words died away.
Smiling, Alex stepped into the room and explained the plan he and Zach had come up with.
“So…we’re supposed to start moving stuff into the office?” she asked.
Nodding, he looked around. The room was large with a queen-size bed, two nightstands, and a dresser. There was a flat-screen television mounted on the wall along with several pictures. Megan was moving some things into the dresser drawers and was doing her best to keep her back to him. Alex chuckled.
“What? What’s so funny?” she asked, still not turning around.
“You’re going to have to look at me eventually, you know,” he said casually and was pleasantly surprised when she did. She looked a little flushed and embarrassed, but at least she was looking at him.
“So you’ve been here a week already. How are you enjoying Portland?”
She returned her attention to her task. “I haven’t gone out sightseeing or anything yet. This whole week has been spent getting settled in at work. Summer’s been great with pointing out things on our way to work and all, but—”
“And you’re staying in the guesthouse?”
“For now. I was relieved to have a place to stay right away. It takes some of the pressure off so I can focus on work.”
Work. Yeah. That was a sore spot with him where she was concerned, and right now, he was kind of glad she wasn’t looking at him because he was certain his displeasure was written all over his face.
“I’ll start looking for a place of my own in the next couple of weeks, but it’s nice to not have to think about it yet. As it is, I have to buy a car.”
He looked at her oddly when she turned around to start moving other items into drawers. “Didn’t you bring anything with you from New York? I know it wouldn’t have been easy to drive cross-country, but it seems like you must have sold everything in order to move here.”
“I did,” she said as she closed a drawer. “The cost of moving all my furniture and keeping it in storage until I found a place wasn’t cost-effective. I figured I would start fresh when I got here.”
Nodding, he slid his hands into his pockets and waited to see if she would offer up any other information about herself without him prompting her.
But patience wasn’t his strong suit right now.
“So, how have you been?” he asked, stepping closer to her.
“Good.”
He chuckled softly. “Good,” he said. “Me too.”
She nodded and then moved to unplug the lamps. When she went to turn away from him, he placed a hand on her arm to stop her. She turned to him, and he saw every emotion she was feeling right there in her eyes. His heart melted a little, and he couldn’t help but smile.
“Hey,” he said softly.
That one word seemed to do the trick because she visibly relaxed.
“I was surprised when Zach told me you’d moved here,” he said quietly, his hand still on her. He wanted to skim it down her arm and take her hand in his, but he knew it was too soon for that. “I wish you had called and let me know.”
Megan took a step away, and he instantly missed the feel of her.
“Alex,” she began, “it’s been two years. I…it would have been weird to reach out to you after all that time.”
“Why?”
“Seriously? What if you were involved with someone? And why would I even assume you’d want to see me? After the way things ended—”
“Do you?” he interrupted, fairly blurting out the question.
She looked at him curiously. “Do I what?”
“Do you want to see me?”
Her brows furrowed. “I’m seeing you right now, Alex.”
He laughed. “I know, but…did you want to see me? Did you think about looking me up when you got settled?”
Her hesitation wasn’t encouraging.
“Alex…”
Then he stepped forward and reached for her hand. “Okay, it wasn’t fair of me to put you on the spot like that. But I want you to know I’m happy you’re here. I…I think about you a lot.” His eyes met hers, and he saw confusion in those dark-brown depths. “I mean it. I hated the way things ended between us.”
“I did too. But geography wasn’t on our side, and then my job, and…I don’t know… I don’t expect you to feel obligated to make something more of it than it was.”
Okay, that wasn’t what he was expecting, and this time it was he who stepped away. “What’s that supposed to mean?”
Megan sighed. “Look, I’m sure this is awkward for you because Zach’s a good friend and I’m his cousin. No one knows about us, so there’s nothing that says we have to do anything now—you’re off the hook. Zach will never know, so we’re free to be…acquaintances or something.”
Was she for real? Did she really have no idea that was the last thing he was looking for? Hell, he’d practically lived his life in limbo for the past two years because he couldn’t get her out of his mind! And now she was saying it didn’t mean anything?