Promo: FIGHT TWICE FOR ME by C.C. WYLDE

CC Wylde believes in wonder, imagination, and fantasies where happily ever afters are real, and finding the one is guaranteed . . . even if the one is really one plus one, two, or three.

She’s always been impressed by the influence stories have on people as individuals and society. Sometimes in real life, rules can be strict. Thoughts and situations can limit us. But she knows that between the pages of a good book—just like in between the linens of our own private sheets—we can all have happy endings. 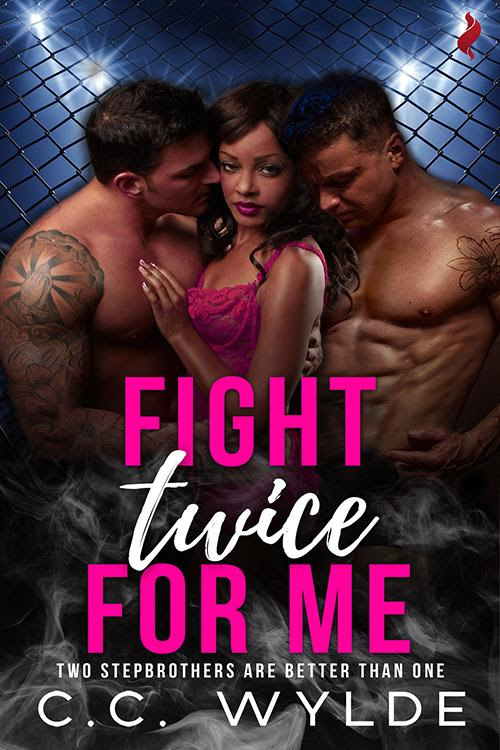 The last place I wanted to be is at my ex’s MMA club, especially since I’ve sworn off fighters.

But I never anticipated meeting the De La Cruz twins. And damn, is there anyone who could resist a chance at a night of mind-blowing sex with them? With their tattoos, muscles, and the fact that there’s two. Besides, I’m getting the hell out of Vegas as soon as I’m done with college in a few weeks, so why not indulge until then?

It felt good to forget the rules…until I woke up to find out they were my new stepbrothers.

It’s about to get complicated.

I shift my gaze from the sign to the man leaning against the side of the building. Cigarette in hand. Leg kicked up against the wall like he owns the place. How can such a simple act inspire so much lust? I’m more desperate than I thought.
A flush of want ignites my skin, heating me from the inside out, which isn’t helpful. It’s already hot as hell. But the Vegas heat has nothing on this guy.
The carved muscles in his chest and abs bulge against his black tee. Dark washed jeans hang low on his hips, hugging well-defined thighs. Ink snakes its way down one arm, all the way to his wrist. The design is difficult to make out at this distance, but that doesn’t stop me from wanting to run my fingers along the mark, tracing not only the tattoo, but the definition in his forearms as well.
Forearms are my weakness. There’s nothing better than a strong man putting his weight on you, watching his effort pop the veins supplying blood to so much more than muscles. My mind instantly goes to how this guy would feel between my legs. What his forearms would look like as he cages me under him.
Pulling myself from that fantasy, I finish devouring him with my eyes. His dark, tousled hair falls down across his forehead, almost obscuring his deep, piercing eyes. Stubble covers his jaw and upper lip in a rugged, I-don’t-give-a-damn-look. His expressive eyebrows and high cheekbones give his face character, but it’s his lips that draw me in. Full. Pouty. Twisted in a smirk that tells me he knows I’m looking, and that I like what I see.