Promo: A DUKE LIKE NO OTHER by VALERIE BOWMAN 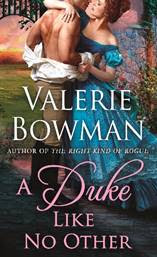 First comes love, then comes marriage. Unless it's the other way around. . .
General Mark Grimaldi has sacrificed everything for his military career, working his way through the ranks without the benefit of a nobleman's title. Now, his years of dedication are about to pay off—with an offer for a prestigious promotion to Home Secretary. There's only one condition: Mark must be married. Aside from the small matter of not actually wanting to be wed, Mark faces another troubling problem: he already has a wife.
Nicole Huntington Grimaldi has spent ten contented years in France without her husband—and without regret. When Mark asks her to return to London and play the part of his beloved wife, she sees her chance. But neither of them is prepared for news that will throw Mark's future into chaos…nor the undeniable desire they've rekindled. Maybe happily-ever-after can happen the second time around in A Duke Like No Other, the next Regency romance from Valerie Bowman.

Buy Link
About the Author
Valerie Bowman grew up in Illinois with six sisters (she’s number seven) and a huge supply of historical romance novels. After a cold and snowy stint earning a degree in English with a minor in history at Smith College, she moved to Florida the first chance she got. Valerie now lives in Jacksonville with her family including her mini-schnauzers, Huckleberry and Violet. When she’s not writing, she keeps busy reading, traveling, or vacillating between watching crazy reality TV and PBS.

Valerie is the author of the Playful Brides series, including The Untamed Earl and Never Trust a Pirate.
Excerpt
CHAPTER ONE
London, July 1818
“You may have your promotion, Grim, on one condition, and I’m afraid it’s a condition you’re not going to like.”
His booted foot propped over the opposite knee, General Mark Grimaldi sat across the desk from Lord Allen, the minister of the Home Office. The older, bald man was Mark’s superior and one of the most influential politicians in the country.
Mark had been waiting for this day for what felt like his entire life. The adult part of his life, at any rate.
His breeches were smartly pressed. His shirt was perfectly starched. His cravat was expertly tied. His boots were shined to a glow, and he had a smile on his face. He was four-and-thirty years old. He’d worked his arse off, risked his life on numerous occasions, and given up nearly everything, all in the name of service to His Majesty. For the love of God, he’d nearly died for this promotion.
Condition? Who cared about a blasted condition? There was nothing the minister could say that would stop Mark. He was going to become the Home Secretary, the head of the Home Office, or die trying.
Mark tugged impatiently at his cuff. “Out with it. There’s no condition I won’t accept.”
The minister stood. He folded his hands behind his back and walked slowly around to the other side of the desk where he towered over Mark, who remained seated. The minister cleared his throat. “Lord Tottenham doesn’t want a secretary who is a bachelor. He wants someone settled.”
Tottenham ran the Home Office. He was Lord Allen’s superior. Tottenham would be the one who made the final decision as to who the new secretary would be.
Grimaldi narrowed his eyes on the minister. “What do you mean, settled?” But he already knew. The pit in his stomach told him.
“A family man,” the minister intoned. “You must take a wife.”
A wife? The word hit Mark like a bullet to the chest. He was entirely self-made. By choice. By highly calculated choice. Now he’d set his sights on becoming the Secretary of the Home Office. Failure wasn’t possible. A wife, or lack thereof, wasn’t about to keep him from it.
He clenched and unclenched his fist by his side. By God, the irony. The unmitigated irony. He’d given his life to his work. No ties. No regrets. He’d given up everything including a social life and now, now they were asking for him to take a wife? Politics could be both brutal and cruel. Today it was downright laughable.
“There is only one problem with my taking a wife,” Mark intoned.
“What’s that?” the minister asked, moving back around the desk to resume his seat.
This was it. The moment of truth. The time to admit to something he hadn’t admitted to in years. A humorless smile twitched his lips. “I’m already married.”