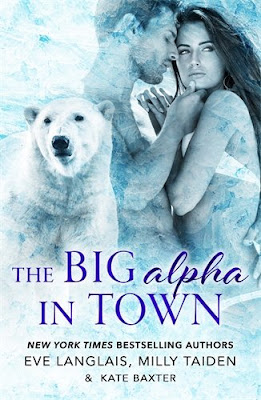 Several men in Ark’s pack, including himself, have received an anonymous note saying a woman is pregnant with their child.  He doesn’t think it’s him, but someone in his big Greek family will take care of it whoever it is.  This bear needs some honey stat!
Jade is so upset with her sister Ruby she can’t think straight.  At a Halloween party Ruby had sex with the Greek God Zeus and now months later she's pregnant and moved in with Jade and Jade is trying to find out who the culprit was.  She got the names of all the men in that costume and sent each a letter, and is surprised several weeks later when someone comes to the door about her card.
Ark knows immediately Jade is his, but what will he do if it is her sister he got pregnant, and what will his large family do to him if he let that happen?

OWNED BY THE LION – Millie Taiden

Ally just moved to town, and Keir, a friend of her friends, offered to help her unpack.  He friends Shawna and Josie might have noticed the sexual tension, but Ally doesn’t want to do anything about whatever it is.  She might reluctantly admit to being attracted to Keir, but he is a definite manwhore, because he can’t go five minutes without a call or a text from a woman.  Ally’s mother needs experimental cancer treatments, and Ally’s friends suggest she apply at mateforhire.com, a matchmaking service for shifters.  In fact, Shawna met her new mate Xander there, plus it pays well.  With no other way to make a lot of money, Ally applies.
Keir’s father keeps asking when he’s going to get married and quit his job and take over for him.  It’s about to drive Keir crazy because he already has a great job and doesn’t want to work for or with his father.  When his friend Xander suggests he find a pretend mate at mateforehire.com for a lot of activities with his father’s company, Keir realizes this could be a great solution.  Keep his father off his back and solve his mate problem without having to deny any one woman his attention.
When Keir and Ally are matched, they are surprised how well they get along, despite Keir’s legion of women that they meet wherever they go.  Could they be True Mates?

Owen Courtney is a member of the local werewolf pack headed by the alpha Liam.  Liam has now found his mate, and Owen is at the local bar thinking that it’s about time that he find the one meant for him too.  But in a small city in Idaho, Owen feels his chances of finding a mate are slim to none.
Mia Oliver is the daughter of the head of the wood nymphs, who told her if she doesn’t produce an heir he will force her to marry whoever he wants.  Nymphs are different than other shifters; and any children are only nymphs.  Nymph’s main ability is using their voices to force people into doing what they want, but only humans; their abilities don’t work on other shifters.  When Mia walks into the bar looking to find a man to get pregnant by, she immediately sees Owen and is somehow drawn to him.  Needless to say, Owen isn’t against a night of no strings sex; except when he sees Mia his heart says “mate”.
Will Own allow Mia to end their relationship after only one night, and what other plans does her father have that he says will eliminate a werewolf pack he has heard of in the area?
Learn about a new type of shifter and if Mia and Owen can overcome their differences and come together as fate has led them to each other.
Three sexy shifter stories will let you into their lives and grab your interest in all things paranormal.  Grab THE BIG ALPHA IN TOWN and have a few enjoyable hours amongst hot shifters.