JoAnn is offering one (1) lucky winner a $50 Amazon Gift Card! To enter, simply fill out the Rafflecopter below:


About No Cowboy Required: 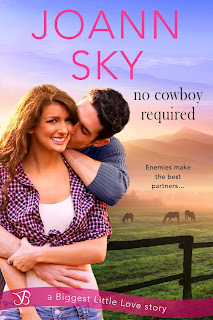 As a photographer in NYC, Grace Harper is a pro at handling the unexpected--which comes in handy when she inherits the ranch home she ran away from seven years ago…along with a young, autistic stepbrother she’s never met. And because nothing ever goes easy for her, Grace finds her frustrating, sexy ex-flame, Noah, taking care of JJ. But she’s getting out of this nowhere town fast, so she’ll have to find a way to keep from throttling Noah—without kissing him first.

Noah Taylor may be enemy number one to Grace, but she needs his help. He knows the girl he used to love is still there, beneath the heels and fancy clothes, so he’ll help her—and keep his distance like she says she wants. Only the more time they spend together, the closer he wants to get. Grace has no intention of staying, but she belongs in his arms—he just has to prove it to her.

He leaned against the kitchen entrance, his own half-eaten sandwich in hand, watching her. “Are you going to avoid me all day?”
She stiffened. She was the New Yorker, used to being direct and dealing with people who got in her face. Yet when Noah did it, it unnerved her. “I’m not avoiding you.” Her pitch was a half-step high, the trait of a liar.
“We’ve got to talk about last night.”
She smacked her bread together and turned to face him, using her sandwich as a shield. She straightened her pose, planted her feet apart, and hoped the Wonder Woman stance would give her Amazonian strength. “Last night was a mistake.”
His dark-blue eyes flashed with a determination that told her he disagreed. Her stomach clenched, and the strength she sought eluded her. Instead she stood there, too frightened to move and too weak to stop where they were going.
He came up on her slowly, as if he knew she’d spook and scatter at any sudden movement. He reached out and tucked one blond curl behind her ear. His fingers skimmed her skin. Goose bumps blossomed down her neck, her spine, to her toenails.
“And it won’t happen again,” she said with as much conviction as she could muster. “End of discussion.” Her voice squeaked, again betraying her, though no worse than the rest of her body.
He leaned in until his lips were inches from hers. Her breathing hitched. She should have put some distance between them, acres of distance, but her feet stuck to the floor. Her eyes flickered to his lips. They’d been so soft last night and were so close right now. One little taste wouldn’t hurt, would it? She reflexively licked hers.
He moved in. His breath trailed her cheek, and his lips hovered at the edge of her jaw, just below her earlobe. She arched her neck back, giving him more access, then shivered, closed her eyes, and waited to feel his lips on her neck.
Instead, his breath fanned her ear. “Liar,” he whispered. Then he was gone.

JoAnn Sky has written for years as part of her job (business and marketing plans and the like). One day she tried her hand at writing for fun—and like it. Now she authors adult contemporary romance and young adult romance with a magical twist as well as children's books.

JoAnn is a two-time Golden Heart® finalist (YA category and Contemporary Short category). Originally from the Midwest, JoAnn currently lives in northern Nevada with her husband a.k.a. love of her life, three teenage children, and three crazy rescue dogs.

Visit her at https://joannsky.com/ where you can sign up for her newsletter (and check out www.dogsandbooks.com for additional information about her children’s books). You can also connect on Twitter at @jaskybooks (http://twitter.com/JASkyBooks) or on Facebook (http://www.facebook.com/joannskyauthor).

JoAnn is represented by the fabulous Nicole Resciniti of The Seymour Agency.