Pre-order LENNON REBORN by Scarlett Cole, the final book in the Preload series!

“WOW!!! Scarlett Cole did it again! She shattered my heart into a trillion pieces and then ever so gently fused it together again.” —Epic Romance Reviews 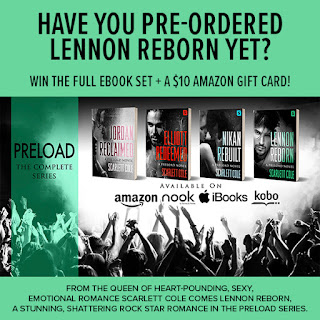 The final book in the Preload series, LENNON REBORN releases next week and we can’t wait for you to get your hands on this stunning, shattering rock star romance! Pre-order this opposites-attract romance today so you don’t miss out on the special $3.99 pre-order price! Plus enter to win the complete Preload series in digital format + $10 Amazon gift card! 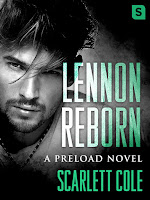 Lennon McCartney is not a broken man. Because being broken implies being whole once. When a horrific accident deprives him of the one thing he loves—his talent as a fierce and explosive drummer—Lennon is left with a life chained by an abusive mother, by crushing guilt over a tragic past. A life he doesn’t want.
Dr. Georgia Starr is a legend. She’s one of the most successful neurosurgeons in the world, coming from a long-line of respected New York doctors. Her life is built around solving complex medical cases in order to bring relief and hope to sick children. But the one problem she can’t solve is how to live her life. How to shake loose the burden of being her elitist, arrogant father’s daughter. How to be free.
Can a man who despises his life and a woman who desperately needs to live find the answers, and love, with each other?
Pre-Order Now for only $3.99: Amazon US | Amazon UK | B&N | iBooks | Chapters Indigo
Amazon → http://amzn.to/2HmLgoU
Amazon UK → http://amzn.to/2IdVuJs
B&N → http://bit.ly/2IzyVPT
iBooks → https://apple.co/2HOg4PR
Chapters Indigo → http://bit.ly/2FTl6d9 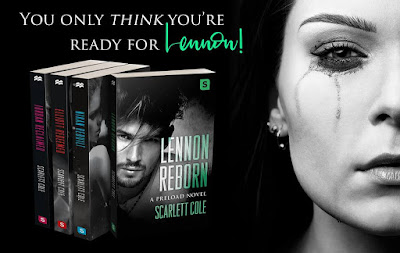 The coach gave an ominous groan as it finally gave up fighting the truck and gravity and fell toward the blacktop.
Time slowed as they were thrown from their seats. He felt weightless for a moment, and then a jarring thud to the ribs knocked the breath out of him. Darkness followed.
Seconds, minutes—who the fuck knew?—passed before a burning pain flooded his body. He tried to focus on where he was. His legs were tangled on something, the strap of Nik’s laptop bag. And it felt as though the bus had landed on his chest. It was impossible to draw a breath through the excruciating agony.
He tried to move his arm, but it felt like a thousand knives pressed deep into his skin. He vomited from the pain.
Fuck.
He looked to his arm and could see bone. The spins returned, and he was sick again.
Fuck.
Shudders racked his body.
Voices filtered through.
“Jenny, oh fuck, sweetheart. Stay still.”
Nik.
Lennon couldn’t see him properly. Everything was blurry.
A child cried, but he couldn’t tell which.
He gasped in another breath, wincing as his ribs fought against the movement.
“Elliott’s leg is broken!” he heard Kendalee shout. From his position on the floor he could see Pixie. Her eyes were closed and she was still. Jordan held her hand tenderly.
A cold sweat covered his skin, the bus suddenly frigid as air weaved its way toward him through the broken glass. He moved his gaze to the ceiling. Fuck, he could see the gray sky through the windows. What he wouldn’t give for just a moment of sunshine.
What he wouldn’t give for someone to hold his hand.
What he wouldn’t give to just be released from all of it.
His breathing became harder, his heart rate slowing.
The sun wasn’t going to come.
And he was alone.

About Scarlett Cole
The tattoo across my right hip says it all really. A Life Less Ordinary. Inked by the amazingly talented Luke Wessman at the Wooster Street Social Club (a.k.a. New York Ink). Why is it important? Well, it sums up my view on life. That we should all aspire to live a life that is less boring, less predictable. Be bold, and do something amazing. I’ve made some crazy choices. I’ve been a car maker, a consultant, and even a senior executive at a large retailer running strategy. Born in England, spent time in the U.S. and Japan, before ending up in Canada were I met my own, personal hero – all six and a half feet of him. Both of us are scorpios! Yeah, I know! Should have checked the astrological signs earlier, but somehow it works for us. We have two amazing kids, who I either could never part with or could easily be convinced to sell on e-bay.
I’ve wanted to be a writer for a really long time. Check through my office cupboards or my computer and you’ll find half written stories and character descriptions everywhere. Now I'm getting the chance to follow that dream.