Book Giveaway: THE BILLIONAIRES: THE STEPBROTHERS by CALISTA FOX

This weekend, I'm posting a giveaway for an arc of THE BILLIONAIRES; THE STEPBROTHERS by Calista Fox 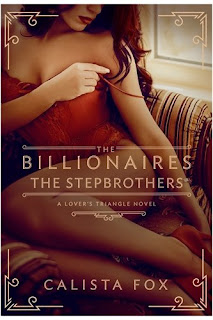 This pair of stepbrothers have their sights set on just one woman…
Scarlet Drake is an insurance fraud investigator hot on the heels of the thief who stole a multimillion-dollar art collection from tycoon Michael Vandenberg’s Hamptons estate. Unfortunately, the sexy Wolf of Wall Street is also her prime suspect—along with his equally mouthwatering stepbrother, Montana rancher Sam Reed. Scarlet quickly finds herself tangled up in the two devilishly handsome men, and ensnared in a web of family lies.
Michael is used to getting what he wants—and he wants Scarlet in his bed. Sam had no intention of getting emotionally or romantically involved with a woman again, but he can’t deny the sizzling chemistry with Scarlet. And when the three of them cave to one sinfully delicious night of sheer decadence, their sexy ménage becomes a fiery affair of the heart. But they don’t stand a chance at a happily ever after unless all of the absolute truths are finally revealed…
This is a standalone ménage romance with an HEA.
Don’t miss these other two standalone ménage romances THE BILLIONAIRES and THE BILLIONAIRES: THE BOSSES.

Note: this is a very hot book.  You can read RRT's review by clicking the LINK

Since I have two arc's....there will be TWO winners!

Hi Calista! Since you are a new-to-me author, I've never had the pleasure of reading your work yet. Thanks for the chance to win a copy of your new book. Hope I win!

Calista Fox is a new author for me but I've heard great things and I'd love to read her.