Beat the post-Valentine’s Day blues and the cold February nights with Jennifer Gracen’s latest The Harrison’s novel, IT MIGHT BE YOU! 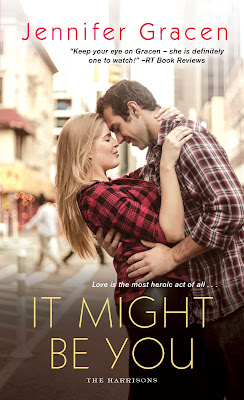 When Officer Nick Martell learns that a sick child needs his help, he flies to the young Harrison boy’s side. But once in the heart of the wealthy Harrison family, Nick faces a shocking truth—he is none other than a Harrison son himself, born of a secret affair. Though the blue-collar bachelor struggles to accept the elite clan as his own, compassion for the vulnerable boy compels him to stay. That, and the deep spark of connection he feels for the child’s beautiful nurse . . .

Amanda Kozlov never felt such a strong and sudden passion for a man before. But falling for Nick is not an option—the life the rugged cop leads is too dangerous, the wounds he carries from his explosive family history too fresh. Yet watching Nick bond with the young boy in her care, experiencing tenderness in his arms, Amanda longs to take a chance on the one man who could save the Harrison heir—the only man with the power to shatter her heart. And as drama swirls around them, only time will tell if they’re brave enough to give their love the future it deserves .

“Excuse me,” said a female voice. Nick’s head swiveled. He’d been so focused on the boy in the bed, he hadn’t realized someone else was there. A gorgeous woman, with dark honey hair, sky-blue eyes, and a sweet smile. Dressed in light blue scrubs, she approached him from the corner of the room, holding things. Nick blinked. She was beautiful... but a beautiful blonde. Couldn’t be a Harrison, then. Who was she?
“Sorry, but I have to ask you to use these before you get closer to him.” She held a white surgical mask in one hand and a bottle of antiseptic hand sanitizer in the other. She offered another smile as she opened the plastic bottle cap.
Something pinged deep in his chest as he looked at her. What the... it was like the air around him went wavy, even crackled with something like electricity. Finally, he blinked and cleared his throat. “Um, sure. Whatever you say.”
“Well, you travelled today, right?” she said. “So many germs in air travel...”
“Right. Of course. Sure.” He took the mask from her, and when their fingers brushed, he felt a jolt shoot up his arm. He almost shivered from it. Get a grip, dude. “I showered when I got to the hotel, though. Hope that helps?” He looked into her eyes.
“It does. But still.” She met his gaze and a light blush colored her cheeks. Maybe he hadn’t been the only one who’d felt that jolt. He couldn’t stop staring at her. What the hell was that about?
“This is Amanda,” Lisette said, jarring him from his momentary daze. “She’s one of Myles’s private nurses. She’s amazing.” Lisette dropped her voice to a stage whisper. “She’s also his favorite on the whole team, but don’t tell anyone.”
Amanda smiled at the compliment, winked down at Myles, then squirted some gel into Nick’s open palm. He rubbed his hands together, making sure to cover all his skin, but his eyes were glued to Amanda. He’d dated many women. He’d seen tons of gorgeous women... but never had one given him such a deep, visceral smack of an instant reaction.
He didn’t believe in love at first sight. But a... click, some kind of recognition, at first sight? Yeah, maybe. Nick felt something, he couldn’t deny it. It was bizarre...
Then he almost grunted at himself out loud. This whole situation was messing with his head. He was losing his damn mind. He had to pull himself together.
“I’m Nick Martell,” he said to her, finding his voice just before he pulled on the mask. “Pleasure to meet you.”
“Nice to meet you too, Mr. Martell.” Amanda’s voice revealed a bit of an accent. Purest Noo Yawk. He loved it.
“Please, call me Nick.”
“Well, Nick, everyone’s been anxious to meet you since they got the news,” she said. “It’s amazing that you’re a match, and that you were found. What a gift...” She reached up to adjust the mask over his nose and chin. Their eyes met again, and his heart gave a little kick in his chest.

Jennifer Gracen hails from Long Island, New York, where she lives with her two sons. After spending her youth writing in private and singing in public, she now only sings in her car and is immersed in her passion for writing. She loves to write contemporary romance for readers who look for authentic characters and satisfying endings. When she isn’t with her kids, doing freelance proofreading, or chatting on Twitter and Facebook, Jennifer writes. She’s already hard at work on her next book.