Promo: INTO THE MOONLESS NIGHT by A.E. DECKER 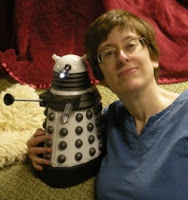 A. E. Decker hails from Pennsylvania. A former doll-maker and ESL tutor, she earned a master’s degree in history, where she developed a love of turning old stories upside-down to see what fell out of them. This led in turn to the writing of her YA novel, The Falling of the Moon. A graduate of Odyssey 2011, her short fiction has appeared in such venues as Beneath Ceaseless Skies, Fireside Magazine, and elsewhere. Like all writers, she is owned by three cats. Come visit her, her cats, and her fur Daleks at www.wordsmeetworld.com or catch up with her on Twitter @moonfallmayhem 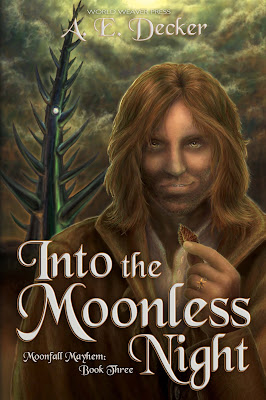 Catch Starthorne has spent a lifetime running from the prophecy that names him as the one who will save the shifter race, but now that he has returned to his home in Clawcrags, he may have to face his destiny. Determined to slip through fate’s fingers, Catch sows confusion, making friends from foes, mixing up the occasional sleeping death potion, and matching wits with an overbearing lion-shifter, who appears to have plans of his own. While Catch schemes, Ascot works to retrieve him with the help of a witch and a pair of madcap shifter rebels. But every attempt to reach him earns her fresh enemies and embroils her ever deeper in the conspiracies surrounding the prophecy. After five hundred years of repressed tension and social strife, the Clawcrags are ready to explode—and it sometimes seems someone’s working hard to see that they do! Grab your copy here!


“What’s the Moonless Night?” asked Dmitri.
Beside him, Moony had worked up to a rude place in his washing, tail slapping the ground hard enough to raise dust. “Supposedly, it’s when Magden Le Fou’s prophecy will be fulfilled,” Jolt replied. “It’s a lunar eclipse occurring three nights after the vernal equinox.”
The prophecy, thought Ascot. The frabjacketing prophecy. Something about a golden star and—well, Catch hadn’t elected to tell her much else, save that the shifters of the Clawcrawgs thought he was the golden star. Which was ridiculous. Had any of them ever looked at scruffy, roguish Catch?    Heard him lie with a straight face, or seen him guzzle more coffee than anyone’s kidneys could stand? Frabjacket, how she missed him.
Dipping his head, Dmitri scratched the ground. Abruptly, his nostrils flared. “That’s only nine days from now.”
Ascot’s throat turned into a stretch of dust. “Nine days?” It came out as a dry squeak. She worked some saliva into her mouth and swallowed. “What will become of Catch if nothing happens on the Moonless Night?” She didn’t want to hear it: the confirmation of her worst fears. Had to hear it, just so she’d know.
Jolt lifted a brow, seeming surprised that she’d even ask. “If he’s not the golden star, then he’s just another slipskin. There’s only one penalty for slipping your skin in the Clawcrags.”
Jolt gave his earlobe a final tug. “Execution.”
Ascot fell away inside herself. The world, shadowed and dark, floated at a distance, as if she stared at it through the cavern of her own skull. Every sound droned and echoed. Only the bloc, bloc of yet another cicada came to her, crisp as the ticking of some mocking clock. She almost didn’t hear Jolt speak again.
“Want us to help rescue him?”

Some praise for the series...

“Falling of the Moon is a fantasy fairytale like nothing I have read before. Mystery and secrets take you to a fantastic mystical world sure to have a book two. It is Pirates of the Caribbean meets Cinderella. Looking forward to Ascot’s next adventure. Strong and determined with her loyal friends she will certainly make the Moonfall Mayhem a great series of books. I am ecstatic that this is just the start to what will be a truly great trilogy.” — Girl + Book

“I’d say it’s like Shrek meets The Wizard of Oz if Dorothy were Wednesday Addams and Toto a talking cat with bat wings. Fun and funny with many laugh-out- loud moments. Can’t wait for the next book in the series!” — Susan Abel Sullivan, author of the Cleo Tidwell Paranormal Mystery series

“A unique and clever fantasy, The Falling of the Moon is a thoroughly entertaining read from first page to last. Very highly recommended and certain to be an enduring favorite.” —Midwest Book Review

“If you’re looking for a great Autumn and Halloween read then look no further, this series has everything you need for a cozy fall evening spent reading. This one is 5/5 stars for me, it’s absolutely perfect and a must read!” —Hollie Ohs Book Reviews
at March 28, 2018