Post a comment in the comments section and you'll be entered in a contest to win a print copy of this book.
Open to US mailing addresses only. 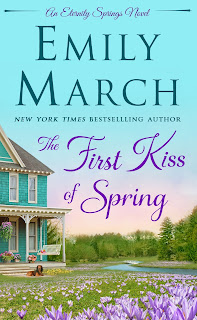 Caitlin Timberlake is visiting Telluride for a wedding, and while playing tourist, she meets Josh Tarkington and the two hit it off. She soon learns he lives in Eternity Springs, where her parents currently live. Nothing happened between Caitlin and Josh beyond a few kisses but meeting him spurs her to change her career path. She quits her job in New York City and decides to move to Eternity Springs, where she’ll open a daycare. Oh, and pursue a romance with Josh. There’s just one problem: Josh isn’t interested in a committed relationship.

Josh settled down in Eternity Springs after an unsettled childhood and living through a tragedy in Oklahoma. While his auto repair business is doing well and he’s made friends with people in town, he’s managed to avoid romantic relationships. After Josh met Caitlin in Telluride, he never expects to see her again, and he’s surprised when she moves to town. She makes it clear that she wants him, and he can’t deny her, despite his reservations about relationships. Caitlin doesn’t ask for anything more from Josh beyond sex, but how will this play out if she’s hoping to have a future with him?

Caitlin Timberlake’s family is respected and well known in Eternity Springs, but she was raised in Denver. Caitlin had left Denver behind years ago to pursue her dreams in New York City. While she and Josh are getting to know one another in Telluride during their visit, they run into her parents, who are surprised to see her (she hadn’t told them she was there since it was a quick trip) and that she’s with Josh, who is fairly new to town. After Caitlin announces she’s moving to Eternity, her parents express concern over her plans, unaware that she is pursuing Josh. She might be nearly thirty, but they still think of her as their little girl. Can she make them understand that she’s a grown woman?

Josh rarely talks about his past. In THE FIRST KISS OF SPRING, each chapter begins with a journal entry that we soon learn is Josh’s from when he was younger. His words show the horror and heartbreak he witnessed, and readers will grow to care for him as the story unfolds. To those who know Josh now, he is honorable and hardworking, but inside he still suffers the emotional scars that were inflicted upon him. While Josh and Caitlin do end up in an affair, he never tells her that he loves her. How long will she endure a relationship where love is seemingly one-sided?

THE FIRST KISS OF SPRING is the latest tale in the long-running Eternity Springs series by Emily March, but like most of them, it can easily be read as a standalone. Readers who are familiar with the series will catch glimpses of characters from previous books and get caught up in who has children, etc. Above and beyond everything is the one central theme of each tale: Celeste Blessing is an angel in disguise. The wisdom she provides helps couples find their way to a happily-ever-after.

Josh’s past is grim, and he’s managed to make a life for himself, but the entrance of Caitlin into his life is a game changer for both. In THE FIRST KISS OF SPRING, the emotional journey of Josh and Caitlin will prove endearing to readers and makes for an enjoyable story.

About THE FIRST KISS OF SPRING: 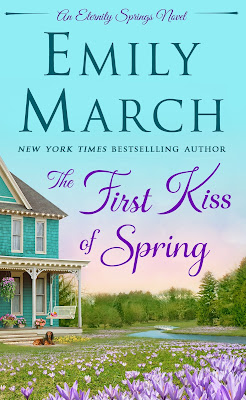 Life could be a dream...
Goal-oriented and gorgeous, Caitlin Timberlake's dreams took her to the top of the corporate ladder in New York City. Now years later, her goals have changed. She wants to come home to Eternity Springs and build a business and a family of her own—with the new man in town. So what if sexy mechanic Josh Tarkington wants nothing more than a fling? Caitlin is a patient woman who knows how to work hard and strategize to win what she desires. She desires Josh. Unfortunately, he has other plans.
If only things were different...
Josh craves Caitlin and all she has to offer. However, he is a man with secrets. He has worked hard to overcome his tragic past, but he's afraid to risk having a future because he knows trouble is never very far away. When a selfless act brings that trouble to his door, he stands to lose everything he cares about—including Caitlin. Will her love and the healing magic of Eternity Springs be enough to save him?

Q: Beautiful cover! What's the inspiration for it? Can you tell us a little about how it plays into the plot of the book?

A: The art started with the title on this book. It’s a story about recovery and rebirth, so we wanted to show a scene that reflects the hope and renewal of spring. It took a few tries to get just the right mix of snow and flowers, but I’m thrilled with how the cover turned out.

Q: What inspired the plot of this book?

A: Eternity Springs is where broken hearts go to heal, and every book explores some aspect of emotional healing.  The title, THE FIRST KISS OF SPRING, came to me first, so I set about developing a plot that fit the idea of rebirth and renewal.

Q: How do you make your characters, plots and scenes so vivid? Do you plan everything out in advance or do you let your writing surprise you?

A:  When I’m writing, character development and scene setting comes naturally to me. I truly lose myself in the story world—that’s the joy of writing for me. Since I’m fifteen books into the series, the world is well established and defined.  My problem is remembering what I’ve written about the world in the past! To help, I keep a detailed “bible” about the people and places in Eternity Springs.

I start with a bare bones plot that always changes substantially during the writing of the book.

Q: I have also read A Stardance Summer and I love your writing. Do you have any tips for those of us who would someday like to publish what they write and improve their writing? Any tips for romance writers especially?

A: My number one piece of advice is to read, read, read, and then read some more. I think writers can absorb a lot about pacing and plot and characterization from reading. I think you should read a variety of fiction, too, not only romance. Every genre has something to teach you.

Q: What's your favorite scene in this book? Why?

A:  I love the meet in THE FIRST KISS OF SPRING. It’s different from anything I’ve written before and that’s always fun.

Q: If you could travel anywhere where would it be?

A:  My husband and I have a big anniversary this year, so we spent some time discussing our dream trip.  After much debate, we decided that instead of taking one long, exotic trip we’d take a series of shorter, domestic trips throughout the year.  So, my “anywhere” is somewhere in the U.S that I’ve always wanted to visit but for one reason or another haven’t. For example, one of our trips is to Yellowstone.

Q: Any plans for more books? What are you working on currently? We’d love to read more from you!

A: I have just turned in the next book in the Eternity Springs series, THE CHRISTMAS WISHING TREE, which comes out October 2nd. So, right now, I’m on vacation—and getting ready to take one of those anniversary trips. J

Author Bio:
Emily March is the New York Times, Publishers Weekly, and USA Today bestselling author of over thirty novels, including the critically acclaimed Eternity Springs series. Publishers Weekly calls March a "master of delightful banter," and her heartwarming, emotionally charged stories have been named to Best of the Year lists by Publishers Weekly, Library Journal, and Romance Writers of America. A graduate of Texas A&M University, Emily is an avid fan of Aggie sports and her recipe for jalapeño relish has made her a tailgating legend.

I love Emily's books. And love the title of her upcoming Christmas book - it really calls to me. LOL. Thanks for the chance to win her newest book.

I like books that have characters that have secrets. Looking forward to reading this one.

I would like to read this book while sitting on the porch swing on that cover.

This one sounds intriqueing!! I adore her books and I know that this one will be excellent. Thanks for the chance to win.

Thank you for the chance to win.
Karen T.

This sounds like a great book to read while laying out on my hammock!
Thanks so much!