Book Giveaway: CLOSE TO THE EDGE by DAWN RYDER 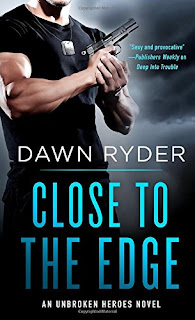 
Jenna Henson made possibly the worst mistake of her life by agreeing to help her friend Sam cater a lunch as a favor.  As she's driving up to the fancy mansion in Malibu, she is abducted by a team in black ski masks.  She got captured in the middle of a Shadow Ops operation involving Kirkland Grog, a rock/hip hop star and human trafficker.  Dare Servant is in charge of capturing the man responsible for the deaths of several women and bringing them in  from out of the country for Kirkland's prostitution business.  Is it possible Jenna is involved?   Until he's sure, he has to keep her hidden away.  Jenna goes from safe house to safe house, until she is again captured by Kirkland's men and sees something she shouldn't, a dead woman in a shipping container, and hears Kirkland's voice.  Jenna is saved from drowning in the ocean, but now she has to lose her identity and be relocated.  Can even that save her from the tentacles of Kirkland?

Kirkland's father was called The Raven, and he left behind a criminal empire Kirkland is expanding on.  His music concerts barely pay for themselves; it is his prostitution business that keeps him in millions, plus his relationship with Carl Davis, a presidential candidate.  In just six months Carl plans to be President, and then he promises to keep Customs from checking the shipping containers of Kirkland's, and to finally sign the papers to disband the Shadow Ops group.

Dare Servant is in charge of taking down Kirkland, and through him Carl Davis.  As a child, Dare was hidden by his parents while his mother was killed in front of his father, and then his father was killed because of his law enforcement job.  Dare is determined to never be in love with anyone who could hurt him in that way.  Jenna starts out as just another case, even though she is extremely brave and doesn't take any guff from him. On Dare's team is Zane Bowan and a woman, Thais Sinclair, who frequently has to use her sex appeal as a weapon to take men down.  Dare's team sees him losing his focus on the job and becoming entangled with Jenna, and they keep trying to remind him to get the job done, while having his back at all times.

Carl Davis is on the edge of becoming President of the United States, and if becoming involved with Kirkland and his media company is what it takes, so be it.  Just recently his main security man was killed by the Shadow Ops group, and he can't wait to sign the Shadow Ops out of business as soon as he is elected

Dawn Ryder continues the story of the Shadow Ops group and the men determined to shut them down.  Dare is a hard-nosed operative, and usually his mind is always on his job, until Jenna.  Jenna knows she is about to lose her life and start a new one somewhere else, with no friends.  But Kagan, their section leader, decides to use her as bait in his plan to bring down Kirkland without telling the rest of the team, and soon Jenna is again captured and held as a traitor.  How many times can she handle Dare treating her as a spy?

CLOSE TO THE EDGE is full of action and treason and human trafficking, and a criminal candidate for the Presidency.  Other books in the  Unbroken Series  are DANGEROUS TO KNOW, DARE YOU TO RUN, DEEP INTO TROUBLE and TAKE TO THE LIMIT.  Kirkland and Carl Davis are still trying to create trouble. See if Dare and his group can stop him, and if Jenna will be the one to break his shell.

Happy Belated St. Patrick's Day!
How did you spend the day?
Post a comment and be entered in a chance to win this book.
(Open to US mailing addresses only)
at March 18, 2018

I don't really celebrate St. Pat's day! Just the usual Sat. activities, haircut and grocery shopping. Thanks for the chance to win this book, it's been on my radar for while now.

Unfortunately I had to prepare for work the next day so didn't get to go wild. But I know our town held a parade and it seemed fun!