Q&A with MEGAN FRAMPTON: THE DUKE'S DAUGHTERS: LADY BE RECKLESS 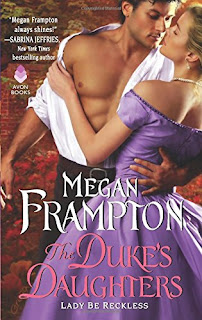 This is the second book in the Duke’s Daughters series, and it’s about Lady Olivia, a woman who firmly believes she knows her own future. As it turns out, she does not.

2.       Without giving away any spoilers, give us a hint about a favorite scene.

The scene where she meets the hero is my favorite; it’s (pretty obviously) inspired by Gone with the Wind.

Not a ton, just as questions come up words that might not have been in use at the time, or events that happened during that year.

I am not sure! This year has been a weird one of changes; my kid is a freshman at college, I am recently unemployed, and so I’ve been writing whenever I can. I try to get 2K a day, but that doesn’t always happen.

I cannot write unless I know what real life person the hero looks like. Edward in this book looks like Aidan Turner.

6.       What has been one of the most surprising things you’ve learned as a published author?

Hm…I don’t know that I’ve been surprised by anything. I was watching from the unpublished wings for a long time before having a sustained career as an author. The first book I ever wrote ended up getting published (by Signet in 2005), and then it was seven years before my second book came out.

7.       What authors or friends influenced you in helping you become a writer?

8.       What does your family think about your career as a published author?

They’re amazed that I can write whole books, and they are prouder of me than I am.

I love to watch Korean dramas, I like beer and wine, and of course I read a lot.

10.   Can you tell us about what’s coming up next for you writing wise?

The third book in the Duke’s Daughters series comes out in September, and I am writing the fourth book right now.

11.   How can readers connect with you online? 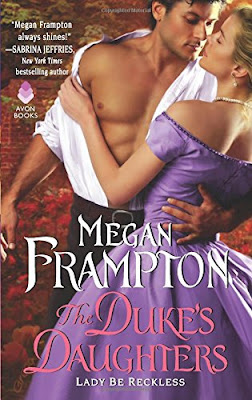 The Duke’s five daughters have beauty, breeding, and impeccable reputations. Or at least, they did. Now that two have chosen to follow their hearts, can the others be far behind?

Lady Olivia refuses to repeat her siblings’ scandalous mistakes. Instead, she will marry the lord rejected by her sister and help with his good works. When he resists, Olivia forms another plan: win his lordship’s admiration by helping his illegitimate best friend find a bride. How difficult can it be to transform the rakish Edward Wolcott into a gentleman? To ignore his virile good looks? To not kiss him in a moment of impulsive madness? Apparently, very difficult indeed.
Edward Wolcott promised his ailing father he would marry well, and it appears Lady Olivia wishes to assist him. The sparkling firebrand intends to smooth his way through London’s ballrooms, parlors, and eligible ladies, while all Edward’s thoughts suddenly revolve around bedrooms . . . and Lady Olivia herself.  Only a scoundrel would seduce the duke’s most dutiful daughter. And only a truly reckless lady would risk everything to be in his arms . . .