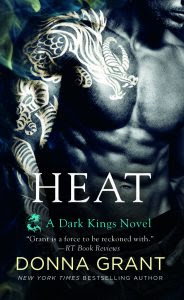 My newest release is HEAT, the 12th book in the Dark Kings  (aka Dragon Kings) series. This book features Nikolai who has the ability to see things much deeper than others, and that will help our MI5 agent heroine, Esther, hopefully get back her missing memories, which involves a mysterious Druid who has ties to one of the Dragon Kings' foes.

I don't plot out my stories, so every day my characters surprise me. The list would take forever to write. :)

3.  You write in different genres. How are you able to jump from one to another?

I honestly don't know. I just look on my schedule, see what I have up next, and while I'm doing a read through of whatever book I've just finished, I start mentally getting ready for the next book. So, by the time I sit down to write it, I've been thinking about those characters and storyline for several days. I think it gives my brain a chance to stop one storyline and move to another, like a refresher. Same as when I write novellas instead of a novel. I force myself to think a different way, so it opens up possibilities.

Every author I've ever read has influenced me in some regard. Whether it's how they've written a story, what characters stand out, or just how they wrote a sentence that I reread several times because it touches me so deeply.

Rather boring. lol  I wake up, drink my warm lemon water while reading emails and doing social media. Then I'll grab a quick breakfast and get to work. I write 10 pages, then break for lunch where I go back and get another 10 pages done. I don't leave until those pages are written. Sometimes I get done early, but other times I'm writing until it's time for me to cook dinner. Sometime in all of that I make myself do some sort of workout. At the end of the day, you'll find me either reading a book or staring at the TV binge watching some latest show.

Reading, obviously. But I have a love of movies. We try to get to the movies once a week. I also have a pretty big movie/TV series DVD collection. And if I'm honest, I've got a crazy makeup, shoe, and purse habit. :D

I've got a release nearly every month, so here is the next few months:

Donna is the New York Times and USA Today bestselling author of over forty-five novels. Her most popular series is the breathtaking Dark King (aka Dragon King) series featuring dragons, immortal Highlanders, and the Fae.

In addition to her novels, Donna has written over forty short stories, novellas, and novelettes for digital-first and print release. She has been dubbed as giving the “paranormal genre a burst of fresh air” by the San Francisco Book Review. Her work has been hailed as having “deft plotting and expert characterization” by Publisher’s Weekly and “sizzling” by RT Book Reviews.

She has been recognized with awards from both bookseller and reader contests including the National Reader’s Choice Award, Booksellers Best Award, as well as the coveted K.I.S.S. Award from RT Book Reviews.

Donna travels often for various speaking engagements, conferences, and book signings. She is also a frequent workshop presenter at national conferences such as RT Book Lovers Convention and Thrillerfest, as well as local chapters. 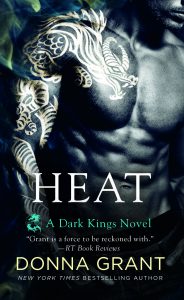 He knew her round eyes and the deep shade of brown along with the band of black that encircled her irises. He knew the slope of her breasts, the indent of her waist, and the flare of her hips. He knew the way she preferred to wear muted colors to help her blend in with a crowd.

It had taken one look to put all that to memory, but he found his eyes going to her again and again, as if he couldn’t get enough.

Nikolai is a dragon shapeshifter who knows well the meaning of loss. Orphaned and raised to be a Dragon King, he never accepts defeat. Now, Nikolai prefers his solitude . . .until a beautiful, irresistible woman calls upon him for help—and Nikola’s whole word goes up in flames.

Ever since MI5 agent Esther woke to discover her mind taken over with magic, she feels like stranger to herself. She looks to a notorious dragon, one who has the power to help her find her memory. But as she and Nikolai come closer to discovering what really happened to her, a dangerous passion ignites between them. Can this lone Dragon King help the woman he’s grown to love to uncover the truth about her past—or will a deep and fiery danger tear them both apart?

Promo Spotlight; Q and A