Promo & Questions with.... JUDITH B. GLAD on COMMONER BY CHOICE 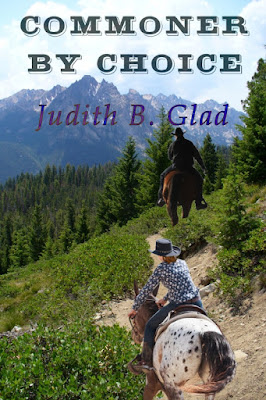 1.  Tell us about your release.

Well, first of all, it's a romance, probably because I can't seem to write anything else. In my first historical romance (The Queen of Cherry Vale), I introduced Hattie Rommel and Emmet Lachlan, Silas DeWitt, William and Flower. Pretty soon they became real people to me, clamoring for their own stories to be told. The clamor didn't stop there, though, because after a while another generation was waving hands, yelling, "Me too! Me too!"

Commoner By Choice (book X in the "Behind the Ranges" series) is about a young Black man in a family where most of his generation has lived exciting, interesting lives. Micah King, on the other hand, has never been much of anywhere, has never had a grand adventure. When he's offered a chance to step outside his ordinary existence, he takes it only reluctantly. That's when he meets Eliza Jane Dollarhide, independent and adventurous, who is seeking what might be buried treasure, but could just as easily be a hopeless cause. Of course, there is a villain who believes he has a better claim on whatever she's seeking and is willing to kill to see that he gets it.

The story is set against the rugged, grand background of Idaho's mountains, where gold lured honest miners and those who preyed  upon them. I won't claim to have been everywhere Micah and Eliza went, but I've spent enough time in the area to have a good feel for how challenging survival must have been with only what they could carry on three mules, and a hundred miles of wilderness to traverse. And having a really nasty bad guy after them would only make it more perilous.

2.  Without giving away any spoilers, give us a hint about a favorite scene.

Micah and Eliza began the day with a spat, and they are riding along a narrow canyon in single file, not speaking. Suddenly the ground begins to shake, the hillside above them to slide. Rocks crash all about Eliza, who manages to get her mule out of danger. When all is finally silent, the trail ahead is blocked. She sees the pack mule, but where is Micah? She is miles from the nearest gold camp, in country where wolves, bears and cougar hunt, and the man she is afraid she is falling in love with may be dead.

What can she do? The only thing possible. She copes.

When I learned to read? Seriously, though, even before that I made up these fantastic stories, until one of my great-aunts decided I was a confirmed liar and made sure everyone knew it. What she would never admit was that my "lies" were actually stories about imaginary people doing exciting stuff.

Make tea, check email, read news, edit (I am an editor for Uncial Press), and when my job is out of the way, the afternoon is mine. I write, promote (I don't so as much of this as I should), plot, research (love to research!), or play solitaire or do jigsaw puzzles on the computer. Such mindless play lets the creative juices flow (and if you believe that, there is this nice bridge in Brooklyn for sale).

I'm really left-brained and it often interferes with my writing, because I am compelled to edit as I go along. The result is dry and pretty boring--too many years writing scientific stuff. So I either turn off my monitor or work on an Alpha-Smart (tiny screen holds about 15 characters). The result is sometimes close to incomprehensible because I'm a terrible typist, but it's almost always worth keeping, once I get rid of all the typos and misspellings, and it works for me.

6. What has been one of the most surprising things you’ve learned as a published author?

That folks are impressed. I never really thought about that aspect, although of course I dreamed of being rich and famous when I won the Pulitzer Prize or one of my books was made into a movie. I'm still waiting for those events. In the meantime it always comes as a surprise when someone thinks being a writer is enviable and wonderful. And making me rich. That last hasn't happened yet either, but I keep dreaming.

My great-aunt Luella (not the one who called me a liar), my husband, and Glenn Balch. My aunt encourage me to tell my stories, convinced me to write them down when I was older, and always said I'd be published someday. Alas, she was long gone when I made my first sale, but I'd have never done it without her encouragement when I was a child. Glenn was our next door neighbor for several years and a successful author of YA westerns, mostly about horses and dogs. When I decided to settle down and write a book, I remembered how he'd gone to his office every day, just like a real job. So I decided that if I was serious about becoming a published author, I had to treat it like a real job. I probably would never have finished the first book otherwise. As for Neil, he simply believed I could do anything I set my mind to. He was more excited than I when I sold that first book.

By this time they are pretty well used to it. At first I think the kids all figured it was just another one of my hobbies. Now they're proud of me. As for the grandchildren, I have never figured out how they feel. "Cool, Granny," is not a helpful comment.

Gardening (mostly vegetables), knitting (socks, anyone?), traveling, cooking, bicycling, and reading. The last is more of a compulsion than an interest. I can't survive without at least one book underway. I used to sew clothes for myself and my children, but not so much anymore, since mostly I wear jeans and knit shirts. I tried quilting and found I didn't enjoy it, not like many of my friends do, so my sewing machine just sits there growing cobwebs.

A couple of "Behind the Ranges" novellas, if I ever get the research done. Well...truth be told, I'm procrastinating, because when I look something up  on the web, it invariably leads to something else, and pretty soon I'm so far off topic that I never get back to the original question. I honestly will finish those novellas one of these days, though. Other than that, I've been toying with an idea for another Regency, but so far that's all it is--an idea.

I've got three websites, a Facebook Page (https://www.facebook.com/pg/judewritesromance/posts/ ), and a Now-and-Again blog (http://judithbglad.blogspot.com/ ). Why three websites, you ask? Well, there's the Gladhaus one (http://www.hevanet.com/gladhaus/ ), that has a lot of non-writerly information I want to share, my writerly one (http://www.judithbglad.com/) that's all about my books, and my alter ego's website (http://www.jayewatson.com/). They all have active email links. Or everyone can just write to me at heyjude@judithbglad.com . I love hearing from my readers and promise to answer every single email. 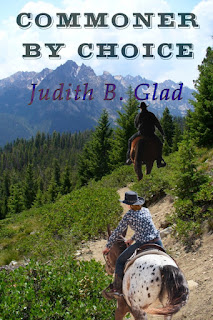 What a great interview -- very interesting answers to wonderful questions! Jude, reading of your great-aunt who called you a liar, I couldn't help thinking about Stephen King's TWO epigrams to "On Writing": "Honesty is the best policy" -- Cervantes. And "Liars prosper" -- Anonymous. Maybe a good motto for a fiction writer would be Emily Dickinson's "Tell all the Truth but tell it slant--/ Success in Circuit lies--"