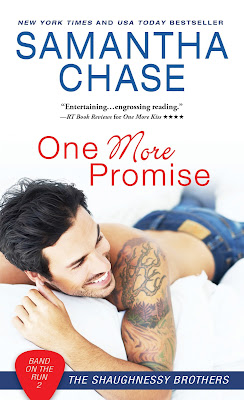 About ONE MORE PROMISE from Samantha Chase:

Ambitious Paige Walters is ecstatic when she's hired to recruit musicians for a literacy campaign—it's her chance to prove she's got the chops to make it in the family business. When Dylan steps in, she immediately dislikes him and vows not to let the fallen idol screw it up. But as the work brings Paige and Dylan closer together, their attraction grows…and so do their challenges…


For the love of it… She had done everything except offer a naked limo ride and Dylan still hadn’t made a move!
A girl could only wait so long.
And boy, oh boy, was it worth the wait.
Every inch of him was hard and muscled and felt so good wrapped around her. She wanted to climb him like a tree. Coupled with the softness of his lips and gentleness of his caress, Dylan Anders was every naughty fantasy she’d ever had—and all he’d done was kiss her!
Paige’s hands anchored in his hair as she went from being the one controlling the kiss to the one being controlled. Dylan’s kiss went from wow to ohmygod in less than a second. He kissed, he tasted, he devoured, and Paige was more than willing to be devoured.
For hours at a time.
When his lips left hers to lick the shell of her ear—she really liked that—and her throat, she let her head fall back as she fought to catch her breath.
“Come home with me,” she panted. “Please. Please, Dylan.”
He bit her gently and then soothed that tender spot with his talented tongue and she was certain they were on the same page. She ran a quick checklist in her head: Bed made? Check. Bedroom clean?    Check. Legs shaved? Check. If she could just get him to the car…
Dylan lifted his head, and she could feel his entire body practically vibrating. Good. She wanted—no, needed him like that. Turned on and unable to say no. Playing the seductress was so not her thing, and she had never been sexually aggressive, but everything about this man brought that out in her.
“Paige,” he said breathlessly.
“Yes?” This was it!
“I… We can’t do this.”
Say what?
“What do you mean we can’t do this? We already are doing this!” It was pointless to pretend she wasn’t pissed off. There was only so much a girl on the verge of climbing a man could take!
Dylan took a step away. And then another. And another. He raked a hand through his hair, making it stand on end, and even that managed to look sexy on him!
The bastard!
“Look, I think lines are getting blurred,” he began. “We talked about this, Paige. I told you why we can’t get involved.”
“And you know that, to the world, it’s going to look like that already. I don’t see why we can’t take advantage of this situation. It’s obvious we’re attracted to each other. I don’t see what the big deal is!”
He studied her for a long moment and Paige wanted to walk up to him and shake him.
But she didn’t.
“Because you deserve better than this,” he said, his voice void of emotion. “You deserve better than a fake relationship with someone like me. Trust me.”
“Dylan…wait…”
But he didn’t. He turned and walked away, and Paige watched him go.
There was a part of her that said to run after him and make him see that he was wrong. But the logical, regular part of her told her to respect his wishes and let it go.
With a weary sigh, she collected her things and made her way out of the studio. She stopped at the front office and thanked the receptionist on her way out. As the warm afternoon sun hit her face, Paige reached in her bag for her sunglasses and slipped them on.
And then stood on the sidewalk and contemplated what to do next.
She didn’t have errands to run, and she didn’t want to go into the office. She could drive around the city, but traffic was always a nightmare, so that wouldn’t be a relaxing endeavor either. Pulling out her phone, she checked the time. Three o’clock. There was always… Nothing. There was nothing that she wanted to do. No hot yoga, no Zumba, no spinning class. Then she laughed at herself because it had easily been six months since she’d been to the gym, so why even consider those activities?


“Because I have way too much pent-up energy and need to do something with it,” she murmured and walked to her car. Inside, she started the car, turned on the air, and still tried to think of what to do. She didn’t want to go home. Home was where she had hoped to be with Dylan right now. 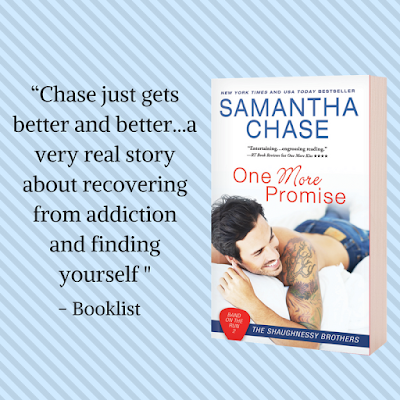