Promo and Giveaway: BEYOND DANGER by KAT MARTIN 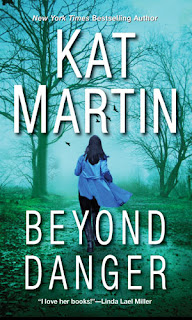 Beyond Danger is Beau’s story.  Mega-rich, black-haired, and blue-eyed, Beau is gorgeous to look at, and flashy.  He was an amateur race car driver, sort of a Texas Paul Newman, before he left the racing circuit.  Beau loves fast cars and fast women.
He is also wanted for murder.
That’s where private investigator, Cassidy Jones, comes in.  She’s smart and she’s no pushover, exactly the woman for Beau.  Best of all, she’s determined to prove his innocence.

"Martin takes readers on a well-plotted roller-coaster ride with her sexy and suspenseful second Texas Trilogy contemporary romantic thriller (after Beyond Reason). Former race car driver Beau Reese is estranged from his father, Stewart, a former state senator, and is furious to learn that Stewart has seduced and impregnated a 19-year-old. When Beau confronts his unrepentant father, he encounters gorgeous Cassidy Jones and thinks she’s another of his father’s mistresses. But later, when Cassidy finds Beau standing over his father’s body, murder weapon in hand, he learns that she’s a PI and his father hired her because he felt threatened. It soon becomes apparent that someone won’t hesitate to kill them both before they find Stewart’s real murderer. Surprises and red herrings lie around every corner, keeping readers off-balance until the author brings the story to a shocking finish. Martin excels in creating multidimensional, appealing rogues and the strong, sexy women who fall for them, and this novel is no exception. An excellent cast of supporting characters provides a well-drawn backdrop as Martin skillfully sets up the last book in the trilogy. This nail-biter of a romantic thriller will delight new readers and returning fans." - Publishers Weekly
RT BOOK REVIEWS
BEYOND DANGER by Kat Martin
“Kat Martin’s Texas Trilogy returns with a gripping new romantic suspense novel featuring Beau Reese and Cassidy Jones. This dynamic duo embarks on a fascinating journey to solve a high-profile crime in Texas. Cutting edge and incredibly thrilling, Martin once again proves she’s a romantic suspense mastermind! Book two, BEYOND DANGER, is compelling with unexpected twists. Long-time fans of Kat Martin will not be disappointed!”- RT Book Reviews, 4 Stars

Martin was born in the Central Valley of California. She obtained a degree in Anthropology and also studied History from the University of California in Santa Barbara.
She lives with her husband, writer and photographer Larry Jay Martin in Missoula, Montana. They have collaborated on a book under the pseudonym of Kathy Lawrence.
Martin is a member of the Romance Writers of America. To date, she has been published in England, Spain, Italy, Greece, Germany, Norway, Sweden, Bulgaria, Russia, South Africa, China, and Korea.

SOCIAL MEDIA
Twitter: https://twitter.com/katmartinauthor
Facebook: https://www.facebook.com/KatMartinAuthor
Goodreads: https://www.goodreads.com/book/show/35118369-beyond-danger
WEBSITE
http://www.katmartin.com/
VIDEO LINK
https://youtu.be/AJju_yS1aB0
CONTEST LINKS
SPECIAL CONTEST: https://www.katmartin.com/beyond-reason-giveaway/
To CELEBRATE the release of BEYOND DANGER, enter my new contest for a chance to win a KINDLE FIRE 7" Display, Wi-Fi, 8 GB and a Kindle copy of INTO THE FURY, INTO THE WHIRLWIND and INTO THE FIRESTORM. Contest runs from December 1, 2017 through February 28, 2018.

Sounds like an interesting book, set in my part of the country. Thanks for the giveaway. (If I win, I'd like a Kindle copy.)

Love the sound of this series!
Thanks so much!

I love Kat's books. Thank you for the great giveaway.