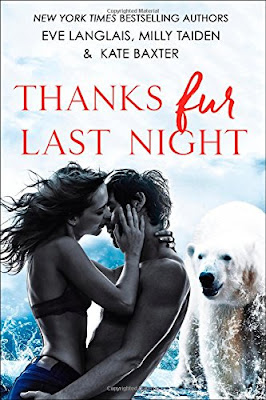 Bearing His Sin
Cole should have killed Anja the moment he realized she was his mate. Instead, he let her live and now they’re on the hunt, chasing the morons who think they can force her to marry another man. Like hell. And while this shapeshifting bear might have his share of sins, he’s not going to let little things like murder and mayhem prevent him from having the woman meant to be the keeper of his heart.
Bought by the Bear
Josilyn Martinez just needed the money to help raise her nephew. That's it. There's no other reason she would take a job posing as a shifter's mate so he can assure his grandmother he's settled down. There's no reason to stay at his place so they learn "more about each other." And there's definitely no good reason she should get involved with the hard, hot, and handsome shifter that's hired her.
Xander just needs a fake mate for a week to get his grandmother off his back. But what's a bear shifter to do when the impostor mate he hired turns out to be his actual mate? All sweet, luscious curves and a heart of gold, Xander's not going to let his mate get away. Now all he has to do is show her that they belong together, one kiss and touch at a time...
The Alpha and I
Devon Kincaid is happy with her new life in Lowman, Idaho. Her little bar on the outskirts of the tiny, isolated town is doing well, and she’s not even interested in finding a man. But when she finds a bleeding man―a hot, hard, handsome, naked bleeding man―in the snow one night, Devon brings him home to care for him. He’s definitely not like any man she’s ever met before, but what she doesn’t realize is that he’s not just a man…
Liam Murphy isn't simply a werewolf. He's the Alpha. In a heated battle with a deadly bear shifter, he's moved his pack to the Sawtooth Wilderness in order to draw danger from them. He was hoping to escape his problems―but the last thing he expects to find in the isolated Idaho wilderness was his mate. Fragile and unfamiliar with the violent supernatural world, the only way he can protect Devon is to make her what he is: a werewolf. He only hopes that in the process convincing her to enter fully into his world, that he doesn’t drive away the one woman he can’t live without.


Purchase a copy at Amazon

THANKS FUR LAST NIGHT – Eve Langlais, Milly Taiden, Kate Baxter St. Martin's Griffin ISBN-13:  978-1-25-017874-9 February 2018 Paranormal Anthology BEARING HIS SIN-Eve Langlais Cole is up in a tree, watching the people in the neighboring property.  Three of the men at Fabian Garoux's property should be shot, and he'd be doing the world a favor.  Fabian is the city's crime lord, and Cole is an assassin, hired to do the job:  no witnesses, no fanfare, no retaliation.  It especially helps that Cole is a bear shifter and can find the guards and patrols and cameras on the property. The only thing is the kill had been cancelled, but Cole is considering doing it for free, until he's caught up the tree.  The woman whose property he is on asks him why he's up in her tree.  A woman caught him unawares—unthinkable.  But…his bear immediately stirs and announces the woman is Mine . Anja and her grandmother “Babushka” live out of the way in the woods.  After Anja's mother died, and her father had already left her mother, she and Babushka came to America from Russia, and now some kind of Russian gangster sends his hoods to kidnap her and marry him.  Anja and Babushka have a nearly impregnable house, but who could this totally handsome guy be hanging in her tree? Life will throw Anja a severe test when they all go to Russia and she finds out about the rest of her family and a love that will never leave her.  BEARING HIS SIN is totally fun. BOUGHT BY THE BEAR – Milly Taiden Josilyn Martinez is just trying to raise her nephew, Nick, after her sister died, and trying to stay ahead of the bills.  Josie had been an accountant, but her ex took every dollar in their divorce, and ruined her reputation at the same firm they both worked for.  Now she can only get work cleaning houses; until her neighbor has a bright idea.  She knows of a shifter who needs a fake girlfriend when his grandmother visits town, and the money will pay the bills for months to come. Xander Ursi is a bear shifter, and though he loves his grandmother to death, when she visits all she will talk about is him getting married.  He'd love to find his true mate, but so far it hasn't happened, so he's doing the best he can and sending an ad for a fake girlfriend for grandmother's next stay.  But when he meets Josilyn as she's about to get attacked in the alley by the restaurant, he can smell immediately that she is his mate. Now Xander just has to convince Josilyn that they are mates, and find out who is stalking her.  Milly Taiden is always a master at shifter stories, and BOUGHT BY THE BEAR is no different. THE ALPHA AND I – Kate Baxter Liam Murphy is the Alpha of his werewolf pack, and several of his members and he were attacked, and somehow he got moved sixty miles away and left in the snow to die.  When he wakes up, his wolf won't let him remember what happened during the attack, and he's so far away from town there is no cell coverage, just a beautiful woman who may have saved his life. Devon Kincaid was driving home during a blizzard when she sees something by the side of the road, a naked bleeding man.  Using her winch around his body she pulls him up the embankment where he was lying. A bear shifter is after Liam and his whole pack, and when he finds Devon is his mate, everything must be done to protect her, even before his pack.  THE ALPHA AND I has plenty of action and tension before Liam and Devon are safe. These are three shifter stories you will love and relish reading, full of individual characters and hunky shifters (aren't they all?). Carolyn Crisher

Maureen said…
It looks like some great stories. Thanks for the chance to win!
4:09 AM

cheryl c said…
This sounds like a good anthology. The title makes me giggle.
6:39 AM

Texas Book Lover said…
This sounds like a lot of fun!
1:25 PM

Karielle Stephanie said…
I'd love to read this exciting book!
10:18 AM