Book Giveaway #2: BEYOND SCANDAL AND DESIRE by LORRAINE HEATH 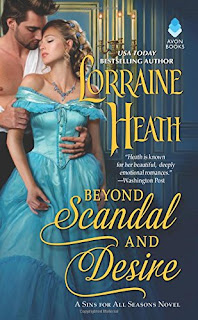 About the book...
At birth, Mick Trewlove, the illegitimate son of a duke, was handed over to a commoner. Despite his lowly upbringing, Mick has become a successful businessman, but all his wealth hasn’t satisfied his need for revenge against the man who still won’t acknowledge him. What else can Mick do but destroy the duke’s legitimate son—and woo the heir’s betrothed into his own unloving arms . . .
Orphaned and sheltered, Lady Aslyn Hastings longs for a bit of adventure. With her intended often preoccupied, Aslyn finds herself drawn to a darkly handsome entrepreneur who seems to understand her so well. Surely a lady of her station should avoid Mick Trewlove. If only he weren’t so irresistible . . .
As secrets are about to be exposed, Mick must decide if his plan for vengeance is worth risking what his heart truly desires.

Lorraine Heath always dreamed of being a writer. After graduating from the University of Texas, she wrote training manuals, press releases, articles, and computer code, but something was always missing. When she read a romance novel, she not only became hooked on the genre, but quickly realized what her writing lacked: rebels, scoundrels, and rogues. She’s been writing about them ever since. Her work has been recognized with numerous industry awards, including RWA’s prestigious RITA®. Her novels have appeared on the USA Today and New York Times bestseller lists.

I haven't read anything by her in a while!! This one looks interesting.

It's great that she has a new book out. Thanks for the giveaway!

I love a good historical romance, and the story of an illegitimate son bent on retribution...so good!

Great! I have holidays next month. My horoscope on astrosofa.com/horoscope tells me it is time for me to relax and reset completely. So I decided that I will read a book in my holidays and won´t do anything except things, which relax me. This will be great! The book sounds nice and will be the one, which I will read. Thanks for the presentation!