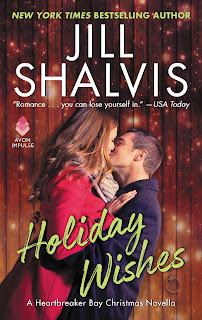 HOLIDAY WISHES – Jill ShalvisA Heartbreaker Bay Christmas NovellaAvonISBN: 978-0-06-246360-9November 2017Contemporary RomanceNapa, California – Present DaySean O’Riley is in charge of a destination wedding for his brother and his fiancée (Finn and Pru from SWEET LITTLE LIES) that will take place just a few days before Christmas. They arrive at the bed and breakfast where the wedding party will stay, and the person at the check-in desk turns out to be none other than the woman Sean gave his virginity to in high school. Charlotte “Lotti” Hartford isn’t happy to see him, and at first is frosty towards him, but a thaw soon occurs. When a rain storm closes all the roads around them, leaving everyone stranded, it’s Lotti and Sean who work together to plan alternative wedding plans for Finn and Pru. While working on the plans, it leads to some late-night sexy business between Sean and Lotti.HOLIDAY WISHES by Jill Shalvis is a short story of reunited lovers that revolves around the wedding plans of Finn and Pru. If you haven’t read the other books in the Heartbreaker series, you might end up curious about them, but you should be able to read this tale without too much difficulty. Finn took over raising Sean after their parents died, and the teenage Sean went to school with Lotti. They dated, and finally one night consummated their relationship. But as soon as she said the “love” word to him, he broke things off with her. This devastated Lotti, which has left its mark after all these years and made her hate him. While Sean is ready to resume where things left off between them, Lotti doesn’t want to end up with another broken heart. But there’s no denying he still makes her purr.There’s plenty of sexy hijinks between Sean and Lotti in HOLIDAY WISHES, and readers also get a secondary story with the wedding between Finn and Pru. Lotti herself was supposed to get married but broke it off recently, and planned to take off on the “honeymoon” trip alone. The bad weather changes things for everyone. HOLIDAY WISHES is a short tale, but it’s long on a satisfying romance that’s perfect for a quick holiday read.Patti Fischer 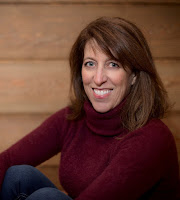 New York Times bestselling author Jill Shalvis lives in a small town in the Sierras full of quirky characters. Any resemblance to the quirky characters in her books is, um, mostly coincidental. Look for Jill’s bestselling, award-winning books wherever romances are sold and visit her website, www.jillshalvis.com, for a complete book list and daily blog detailing her city-girl-living-in-the-mountains adventures.

When Sean O’Riley shows up at the Hartford Bed & Breakfast for his older brother’s bachelor weekend, he’s just hoping to make it through the weekend. What he’s not expecting is to come face to face with the woman he lost his virginity to a decade ago—a woman he’s never really forgotten.

The last time Lotti Hartford saw Sean, she told him she loved him while he said nothing. Now, ten years later, she’s just looking for a good time. For once, she wants to be the wild and free one, and Sean – the good time guy – is the perfect candidate.

But as the weekend continues, Sean realizes that after a lifetime of being the hook-up king, he’s ready to find happily-ever-after, and he wants it with Lotti. But will she open her heart to him again? As Christmas sweeps through the little B&B, he can only hope love and magic are in the air.

Win a print copy of HOLIDAY WISHES by posting a comment.  What is your wish for Christmas or whatever holiday that you celebrate.
Open to U.S. mailing addresses only.
at November 07, 2017

Spending time with children and grandchildren.

I do like second-chance stories--how fun! As for Christmas wish, as Cheryl said, spending time with family and friends! And of course, more books ;) (And the time to read them!)

My wish is for health and happiness for my family.

My wish is for a joyful, peaceful holiday season.

My wish is to see my daughter who lives in NY. I really miss her!

I wish all the hatred and terrorism would stop.