Promo: With this Christmas Ring by Manda Collins 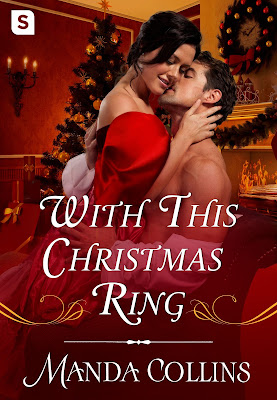 Jacket Summary:
A wallflower determined to fulfill a dying promise, the rogue she jilted years ago, and an orphaned baby are all brought together amidst the magic of Christmas in this new novella from Manda Collins. Miss Merry Parks makes a deathbed promise to a schoolfriend that her infant daughter will be taken to her absent father. There’s only one problem—to find the baby’s father, she’ll have to consult his cousin, Viscount Wrotham, the man she jilted five years ago. The man she couldn’t forget. Alex Ponsonby, Viscount Wrotham, is stunned to find Merry Parks—looking more lovely than ever--on his doorstep with an infant in her arms. His shock soon turns to dismay when he learns his own cousin William is the man who abandoned his wife and child. As head of the family he’s duty bound to see right is done. But he can't let this opportunity pass. He’ll take Merry and the baby to his cousin, but he’ll woo her back in the process.Merry agrees to travel with Alex and the baby to Wrotham Castle, where the entire Ponsonby family has gathered for Christmas, but her plans to see the baby settled then leave are ruined by a snowstorm. After five years apart, Alex and Merry will spend the week getting reacquainted. Perhaps it’s the spirit of the holiday, or the magic of the season, but there could be something else in the air this Yuletide…A Christmas Reunion.

Manda Collins is the author of the Studies in Scandal series, The Lords of Anarchy series, The Ugly Duckling series and the Wicked Widows series as well as several other Regency-set romances. She spent her teen years wishing she’d been born a couple of centuries earlier, preferably in the English countryside. Time travel being what it is, she resigned herself to life with electricity and indoor plumbing, and read lots of books. When she’s not writing, she’s helping other people use books, as an academic librarian.

Manda Collins
When do the holidays official start for you?
The first frosty morning when there's a nip in the air and I can feel that winter is on the way. I love that feeling!
What's your favorite thing about the holidays?
Getting together with family and friends is the best. We don't necessarily see one another all that much during the year, but we all make time during the holidays.
Are there any holiday traditions you do every year without fail?
I listen to carols sung by the King's College Choir every year and spend at least one day boiling cloves and spices on the stove to get the house smelling like Christmas.
What's your favorite holiday movie?
The Thin Man starring Myrna Loy and William Powell as Nick and Nora Charles. (Of course MY favorite holiday movie has witty repartee and murder in it!)
Do you have a favorite holiday book?
That would be Christmas Angel by Jo Beverley. It's one of her early Company of Rogues books and I love the way Lucien and Beth and her children become a family over the course of the story.
What's your all-time favorite holiday song?
The Holly and the Ivy.
What's your favorite activity during fall or winter?
I'm not really the outdoor type (though I have been known to go outdoors) so I like to snuggle up inside with a cup of hot chocolate and read. Or knit.
What's your favorite gift you've ever received or given?
My grandmother gave me the gift of the love of reading. It's the best thing I've ever been given.
Do you have any items on your wish list this year?
I'm at an age now where the things I wish for aren't material (though obviously there are some that I'd like--a new car, for instance) but stuff like health and for my family to be safe and happy. I wouldn't turn down a pretty scarf, though!
Any resolutions or goals for next year?
Just to keep writing books that my audience enjoys reading!