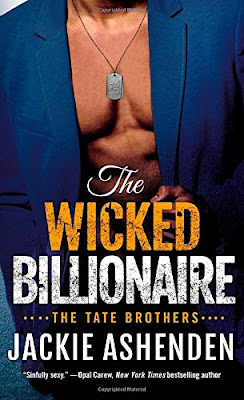 The Tate Brothers were once orphans and they have been raised to do one thing only: protect what is theirs.

As a trained sniper and Navy SEAL, Lucas Tate found the courage to distance himself from the wealthy, wicked patriarch who adopted him. Instead, he’s devoted his life to the elite band of brothers from his unit. So when the widow of one of his former comrades finds herself in apparent danger, Lucas makes it his job to protect her against all enemies. . .and not let her out of his sights.

Grace Riley feels overwhelmed by Lucas's presence, but the cold-eyed marksman will do anything to keep her safe. Soon the special attention he pays her becomes a wild romantic distraction—one that troubles Grace, since Lucas was so close to her deceased husband. Still, how can she resist Lucas’s intense, ice-blue stare? All she knows is that a life without strong, passionate Lucas is one not worth living. Can Lucas can find a way to honor his former brother-in-arms by saving Grace. . .and loving her, too?

Author Bio:
Jackie Ashenden lives in Auckland, New Zealand with her husband, the inimitable Dr. Jax, and their two kids and two cats. When she's not torturing alpha males and their stroppy heroines, she can be found drinking chocolate martinis, reading anything she can lay her hands on, posting random crap on her blog, or being forced to go mountain biking with her husband.

THE WICKED BILLIONAIRE – Jackie AshendenThe Tate Brothers, Book 2St. Martin’s PaperbacksISBN: 978-1-250-12281-0October 2017Contemporary RomanceNew York City – Present DayLucas Tate has spent his adult life as a Navy SEAL and trained sniper, but he came home after his adopted father died. His father’s will has some stipulations—and a letter for Lucas. He must protect the widow of his late friend, Griffin, who died after being caught dealing military arms for cash. Lucas remembers the widow, Grace Riley, as a woman he felt a twinge of attraction for, but because she was his friend’s wife, pushed his feelings aside. He approaches Grace at her apartment, and informs her that bad men are after her for the money Griffin received from them because they never got the goods. And they'll likely kidnap and kill her if she doesn’t cooperate with them.Grace never knew the truth about why Griffin died and Lucas’s news stuns her. She loved her late husband, but she isn't exactly the grieving wife. Their marriage was more like a friendship. She is an artist and is getting ready for an upcoming show and can’t afford to suddenly go into hiding. But Lucas is convincing…well, he more or less forces her to come with him. She accepts his protection, but chafes at the way he isn’t more forthcoming with her about how long it will take before she can resume her life. He installs her in a secret apartment, where their closeness soon turns into a fiery attraction that neither can ignore. Meanwhile, the danger continues to lurk outside, never letting them be free. Before long, Lucas realizes he’s going to have to take a risk in helping Grace secure her freedom.Grace and Lucas are forced to go into hiding in THE WICKED BILLIONAIRE, the second book in Jackie Ashenden’s Tate Brothersseries. This one follows closely along the end of the first tale, THE DANGEROUS BILLIONAIRE, which sets up the three Tate “brothers” and how they are dealing with the contents of their late adoptive father’s will. None of them – Lucas, Noah, and Wolf – ended up liking the man who adopted them or want to take over the company, but the old man is still giving them orders from the grave. Lucas learns about Grace’s danger from a note left to him that he can’t ignore. She doesn’t want his protection at first, but he’s persistent. More to the point, he tells her in no uncertain terms she must come with him…or she’ll die.Grace remembered Lucas as Griffin’s friend and that he always intrigued her. He seemed like a wounded hero and she wanted to dig deeper and find a way to help him. In THE WICKED BILLIONAIRE, she gets a chance to find out what makes Lucas tick. He was adopted as a child by a billionaire but chose to not go into his father’s business by making the Navy SEALS his career. Even now, Lucas is ready to head to his next mission, but he has to make sure Grace is safe. He does know one person that has a stake in getting the money back, but should he risk his life to make that contact? This underlying quandary lurks in the background in THE WICKED BILLIONAIRE, but it’s the sizzling chemistry between Lucas and Grace that drives the tension. Their sexual tension soon explodes into a passion neither expects. But is there any future for a man who is married to the military and a woman who only wants a man to give her his heart and soul?The high stakes of passion and suspense fill the pages in THE WICKED BILLIONAIRE and makes for an intriguing read that you won’t want to put down.Patti Fischer
at October 03, 2017

Thanks for info. Putting on my wishlist.