Promo & Review for BIDDING ON THE BACHELOR by KERRI CARPENTER


Recently divorced Carissa Blackwell returns to her hometown and reconnects with her first love Jasper Dumont, while the ubiquitous Bayside Blogger reports their every move for the town newspaper in this delightful & playful novel by award-winning romance author Kerri Carpenter.

Kerri is offering one (1) lucky Grand Prize winner a $50 Amazon Gift Card and three (3) Runner-Up winners with an eCopy of one of Falling for the Right Brother (Saved by the Blog #1)! To enter, simply fill out the Rafflecopter below: 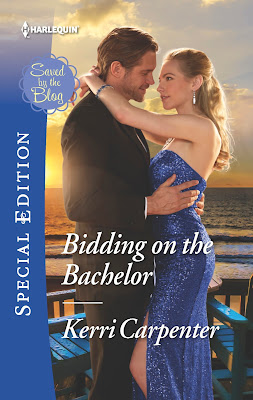 BIDDING ON THE BACHELOR – Kerri CarpenterSaved by the Blog, Book 2Harlequin Special EditionISBN: 978-0-373-62379-2September 2017Contemporary Series RomanceBayside, Virginia – Present DayCarissa Blackwell invested a lot of herself in her marriage, only to have it end after her now ex cheated on her. She decides to start over in the town she grew up in, Bayside, but how will everyone treat her? Shortly after Carissa graduated from high school, she was forced to leave town with her parents, leaving behind friends…and her boyfriend, Jasper Dumont. She doesn’t think Jasper lives there anymore, but much to her surprise, he does. And the sparks between them are rekindled. Then there is the town’s gossipy blogger, who seems to know every move Carissa and Jasper make.Jasper never forgot Carissa, but he also can’t forget that she dumped him without an explanation right after graduation. He’s now running the family company and daily makes major decisions, but after seeing Carissa again, he’s unsure of how he feels. She dumped him, but now she’s back. After Jasper helps Carissa jumpstart her catering business, things heat up between them. Is there a chance they can start over again and have a future together?Carissa married right out of college to a man she thought she’d spend the rest of her life with, but the man treated her like a trophy wife. One that should accept his extramarital affairs. But Carissa couldn’t take it anymore and they divorced, though because of the prenuptial agreement she left with what she brought into the marriage. Her aunt offers her the use of her cottage while she’s gone, so Carissa makes the decision to return to Bayside, the town where she grew up, knowing it’ll have memories for her of Jasper. But coming face-to-face with Jasper throws her for a loop, reminding her that she still hasn’t gotten over him.Jasper has money and continues to make money. Yet all the money in the world can’t buy love…or Carissa. But he’ll do anything to win her back, though he’s not sure what will happen once he succeeds. Does he want to take up where they left off? Meanwhile, Jasper enjoys helping Carissa with her catering business, but she’s proud and doesn’t want him to be her benefactor. This sets off clashes between them as she battles him because she wants to do things on her own. After living a life under the control of her parents, then a husband, one can understand Clarissa’s need for independence.BIDDING ON THE BACHELOR is part of the Saved by the Blog series by Kerri Carpenter, but can easily be read as a standalone without any difficulty. The first book features Jasper’s brother, Cam, and Elle, an old high school friend of Carissa’s. Cam and Elle’s tale is told in FALLING FOR THE RIGHT BROTHER, out now.Rekindled love proves the right stuff in BIDDING ON THE BACHELOR as Carissa and Jasper rediscover their love. Will it lead to a happily-ever-after? Find out in this entertaining tale.Patti Fischer


About Bidding on the Bachelor:

Title: Bidding on the Bachelor

Another roll of the dice
Big news, fair readers! Bayside High's favorite It Girl is back. Would you have bet Clarissa Blackwell would ever return? Ten years ago, she crushed Jasper Dumont's heart under her Jimmy Choos and left town for a bigger, better life. Her return raises one question: What is she running from (or is it to) now?

Perhaps Jasper knows? One look at Carissa and he fell in the bay! (Rich, single and devastatingly handsome, Jasper's our catch of the day.) That icy plunge should have brought him to his senses, yet "Casper" has been spotted together all over town. Does this mean Bayside's legendary couple may reunite? The stakes are high, but the Bayside Blogger's money is riding on love!

“I’m back in town.”
“For how long?” he asked quickly, too quickly. In fact, if she wasn’t mistaken, anger laced his question. She must have reacted to it because his features softened. “Sorry, it’s none of my business. And I do remember that today is your birthday. So, happy birthday, Carissa.”
“Thanks,” she said, and meant it. She decided to offer an olive branch because the truth was that she’d dumped him and she hadn’t been kind about it. This icy reception she was receiving was well deserved. While she knew the reasons behind her decision, she’d never let Jasper in on it. She’d been a bratty, selfish teenager, not capable of understanding her emotions. Unwilling to admit that Jasper had always reminded her of her father and that summer her dad had dropped a bombshell on her.
“I don’t know how long I’ll be in town. I’m sort of in a transition period right now.” He waited patiently. After another long drink of beer, she finished. “I just got divorced.” Saying the words out loud left an awful taste in her mouth. An acidic aftertaste of yuckiness.
First, shock flashed on his face. Then, true concern shone in his eyes. “I’m sorry,” he said.
And that might have been her undoing. Because he had every reason to be stiff and awkward with her. Instead, any kind of compassion from him loosened her lips.
“Today is my twenty-ninth birthday. I’m having a beer next to my ex-boyfriend, who hates my guts, in a dive bar in the town I swore I would never step foot in again. An ex-boyfriend I should really apologize to because I was an evil witch to him.” The words were flying now. She gripped her hand tightly around her glass. “I’m not even thirty and already I’ve been married and divorced. And I got divorced because he freaking cheated on me.”
She couldn’t miss the way Jasper’s eyes narrowed, his hands curled into fists, and there was a definite tic in his clenched jaw. “He cheated on you?”
“Yep. Apparently, the fact that I was homecoming queen, prom queen and head cheerleader did nothing to impress him. Or keep his pants zipped up when anyone wearing a skirt in the Central Time Zone walked by. That probably makes your whole day, doesn’t it?”
He slammed his hand on the bar and she jumped. But she just as quickly composed herself. “What? You have every right to revel in my misery after the way I broke up with you. I got divorced. You win.”
His eyes narrowed. “I don’t want to win at that game. And I certainly don’t want to hear that some idiot cheated on you. I’m sorry you’re getting divorced.”
“That makes one of us.”

Copyright © 2017 Bidding on the Bachelor by Kerri Carpenter

Other Books in the Saved by the Blog series:

Falling for the Right Brother

Saved by the blog!

This just in, fair readers! Chic and stunning, that gorgeous new woman about town is none other than our very own little Ellie--now Elle--Owens. She's a far cry from the frumpy, bookish student we used to know, but then, living in Italy will do that to a girl! Still, this blogger can't forget the infamous video that caused her to leave!

Apparently Miss Elle has been spotted with yummy contractor Cam Dumont...but we thought her heart belonged to his little brother. Are Cam and Elle a new couple? They were seen cooling their passions in the bay...in April! If this is love, let's hope she's swimming with the right brother. The Bayside Blogger will keep you posted.

Thank you so much for having me on your blog today! I'm thrilled you enjoyed Bidding on the Bachelor!