Promo: IN TOO DEEP by KIMBERLY KINCAID

Have You Pre-ordered IN TOO DEEP by Kimberly Kincaid yet? 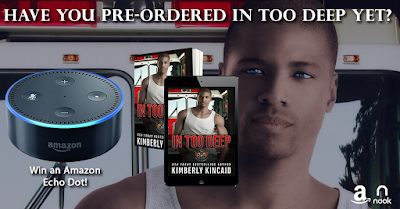 Pre-order IN TOO DEEP and add it to your TBR pile on Goodreads! Then keep reading to get an EXCLUSIVE sneak peek at IN TOO DEEP and to enter the giveaway for a $25 Amazon gift card! 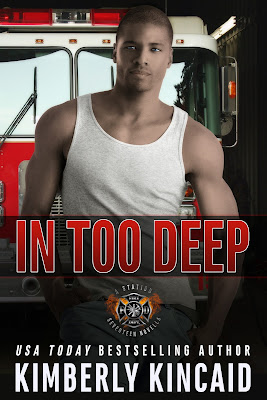 As Station Seventeen’s rookie, Luke Slater knows his fire and EMS training will be both rigorous and risky, but he never imagined having to partner up with the one woman he wants to keep at arm’s length most of all. Quinn Copeland is as wide-open as Luke is reserved. He has no interest in letting the sweet and sexy paramedic rock his hard-earned control. But the need for composure becomes the need to survive when they find themselves in the crosshairs of a brutal gang leader on their first shift together.

Paramedic Quinn Copeland’s station mates aren’t just her friends. They’re her family. She’d do anything to keep them safe—including reluctantly trusting her impossible-to-read, impossibly gorgeous new partner with the one thing she holds close. As the passion between Luke and Quinn goes from a slow burn to a sizzle, their steps grow more and more dangerous, both in the fire house and out. Can they outwit a cold-blooded killer and face the fears that could cost them everything? Or are they in too deep?

Enter to win an  Amazon Echo from Kimberly Kincaid!


In Too Deep Excerpt
Copyright © 2017 Kimberly Kincaid
Shae moved her gaze over their surroundings in a methodical sweep, the eyes she’d squinted against the glare of the late-morning sunlight going round and wide as they landed on Quinn. “So,” she said, dropping her voice but not the ear-to-ear smile that told Luke nothing good was going to come from their now-private conversation. “About Quinn.”
“What about her?” Luke stared holes in the pick-off strap he’d pre-rigged before the drill, willing his fingers to steadily fasten the stupid thing to the main attachment point on Shae’s harness. Rope rescue. Safe transfer. Focus.
“You two have been spending some time together lately, huh?”
His stomach knotted before dropping toward his hips. “Quinn has been helping with my paramedic training,” he said, selecting his words with care. After a really hairy call had led the house to a gruesome arson/murder scene three months ago, Luke had been surprised to discover he had a fear of blood. But since he also wanted to help people as a first responder, he couldn’t let that fear—debilitating as it had been—stand in the way of him doing the job that would keep people safe.
So he’d done what he always did. He’d taken a step back to quietly attack the problem, devoting himself not only to the rest of his fire and rescue training, but to earning his certification as a paramedic at the same time. Yeah, the workload was intense, and no, balancing both didn’t leave him much time for luxuries outside of sleep or hot meals. He wasn’t exactly a stranger to balls-out hard work, though. In fact, he and hard work were more like what his seventeen-year-old sister Hayley would call “besties”. Not that Luke had any freaking clue what that might actually entail, since he never got past the handshake and Heisman stage with anyone.
That whole arm’s length thing? So not an overstatement.
At any rate, Luke had his sister and their grandmother, Momma Billie. He didn’t need a bunch of Lifetime Original moments to distract him from his goal. He’d attained his full qualifications as an EMT six weeks ago. Official paramedic status would be in his reach before the year was out, provided he could continue to keep his seemingly sudden-onset fear of blood at bay. He was well on his way to becoming a full-fledged firefighter, like he’d always wanted. Just as long as he could keep both his focus and his distance, he’d be fucking stellar.
Quinn looked up with a grin and a wave before heading back into the fire house, and Christ, did she really have to have a set of cutely sexy dimples he could see all the way from here?
“Helping you with your paramedic training,” Shae echoed, her quiet murmur tumbling him right back to the here and now of the side wall of the engine bay.
Luke concentrated on the equipment in his hands, the clink of the carabiners and the soft hiss of the nylon ropes as he continued with the rope transfer while he spoke. “Sure. She’s been giving me tips and tricks to remember different procedures, telling me the fastest ways to safely do workups. Stuff like that.”
“Ah.” Shae waited a beat while he clipped the backup carabiner for the line transfer into place. “You know, it wouldn’t be terrible if you liked her.”
“I do like her.” The words shoveled out of his mouth by default. He double-checked the carabiner. Adjusted the slack in his line. Mentally kicked himself square in the nuts. “She’s nice.”
Shae made a noise Momma Billie would have described as unladylike. “You know what I mean, Slater. Don’t be a dumbass.”
And that was the problem, right there. He was a dumbass. He didn’t just like Quinn in a casual friends, good co-workers, she’s-helping-me-with-my-training kind of way. Nope. He was attracted to her. From the minute he’d clapped eyes on Quinn on his very first day as a rookie, Luke had had this reckless desire to kiss her. To hook his fingers in that waterfall of blond waves spilling down her back, to part her lips with his tongue and taste her until he ran out of air.
And he didn’t want to stop at her mouth.

Kimberly Kincaid writes contemporary romance that splits the difference between sexy and sweet and hot and edgy romantic suspense. When she’s not sitting cross-legged in an ancient desk chair known as “The Pleather Bomber”, she can be found practicing obscene amounts of yoga, whipping up anything from enchiladas to éclairs in her kitchen, or curled up with her nose in a book. Kimberly is a USA Today best-selling author and a 2016 and 2015 RWA RITA® finalist and 2014 Bookseller’s Best nominee who lives (and writes!) by the mantra that food is love. Kimberly resides in Virginia with her wildly patient husband and their three daughters.