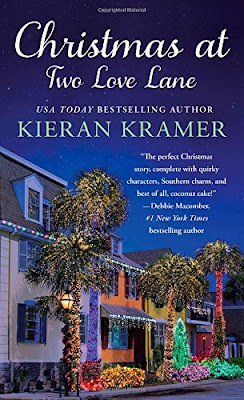 CHRISTMAS AT TWO LOVE LANE – Kieran KramerSt. Martin’sISBN: 978-1-250-11104-3October 2017Contemporary RomanceCharleston, South Carolina – Present DayMacy Frost, along with two partners, owns one of the hottest matchmaking services in Charleston. When Deacon Banks walks into her office uninvited one day, he throws her for a loop, because such an attractive man shouldn’t have problems finding available women. However, Deacon insists he wants her services, though it will only be through the end of December when he returns to New York City. Macy’s business is finding a match for a couple with the hopes of a future together. How can she find a match for a man who only wants a temporary relationship?Deacon probably wouldn’t have been in Macy’s office except his beloved Aunt Fran insisted he date while he’s spending a month with her. Macy intrigues him, and he’s pleased to learn that she lives next door to his aunt. But she insists that she doesn’t date clients and she doesn’t have time for romance, so she refuses his offer of a date. Deacon decides to go along with her list of potential dates and pretends to enjoy them with the idea of making Macy jealous. It works all too well…Macy and her friends, Greer and Ella, started Two Love Lane, a matchmaking service, and it has proven successful. Macy’s claims that she can match anyone to their true love is backed by a long-ago relative’s claim that he was descended from Cupid. For her part, Macy doesn’t think she’ll ever find love after nearly breaking up her parents’ marriage when she was a child. They’re okay now, but the adult Macy still has plenty of guilt. Macy thinks Deacon is charming and attractive, but she has no intention of “tasting the wares.” But Deacon insists on hanging around Macy, which is easily done since they’re living in the same condo complex. As Deacon embarks on his dates, something always seems to happen where the female abandons him, leaving him alone with Macy. Of course, the attraction between Macy and Deacon is building to something much more, but she still insists she can’t get involved with him.Even as Deacon stealthy pursues Macy, his plan to leave at the end of December doesn’t change. Is he only looking for a sweet fling with her and then he’ll be out of her life? He discovers that she’s intelligent, not afraid to speak her mind, and is as beautiful inside as she is outside…and they get along perfectly. They are the perfect match. But Macy isn’t biting. In CHRISTMAS AT TWO LOVE LANE, wherever Macy goes, there’s Deacon, including helping her prepare for Christmas festivities. As she spurns him, he begins to wonder if his heart will be the one broken.Minor characters in CHRISTMAS AT TWO LOVE LANE include Macy’s two partners. They can see that she is Deacon’s match, but she doesn’t want to believe it. Deacon’s aunt, Fran, is attracted to a crusty old military man and, with Macy and Deacon’s help, they are pushed into starting a romance. Many other minor characters fill the pages, too numerous to mention.A holiday romance that is both sweet and sensual, CHRISTMAS AT TWO LOVE LANE is about finding true love when you least expect it. Macy and Deacon weren’t looking for love, but love found them. Grab this engaging tale to kick off your Christmas romance reading season.Patti Fischer

Another Christmas book to give away!

It is on my wish list. Thanks for the chance to win.

I have never read this author. Sound like a good Christmas story.
Natty's Mama

Sounds great. Thank you for the giveaway. :)

Time goes by so fast. Thanksgiving and Christmas soon.
Would love to win this book
PattyB43