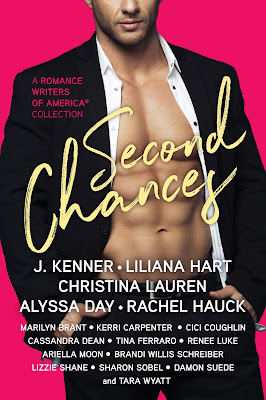 Do you believe in second chances?

Romance Writers of America brings together seventeen of today's hottest authors in an anthology of never-before-published tales that reveal true love always deserves a happy ending.

And Liliana Hart delivers thrills and adventure in her characters’ search for the impossible.

With characters who find love through tough situations, in an elegant 1800s ballroom, with an old friend who shows up when least expected, at a tender age when cliques and homework get in the way of relationships, or after a random encounter in an unlikely setting, Second Chances delivers romance to strike every reader’s fancy.


From "Scandalous" by Cassandra Dean


Shifting his weight, he considered his options. Maybe he should make his way to his club or a gambling house or any one of a number of entertainments he’d previously patronized. While it held amusement to force his presence upon a society clearly unwilling to host him, there were vastly more interesting ways to spend an evening—not that he could think of any at this present moment. Of late, the life of a profligate had started to pall, and he found himself wondering about his estate in Ambleside. Of what might be involved in land management, and how the sun would feel against his skin as he stood in a field, the gentle bleat of sheep carried on the breeze.

With a twist of his lips, he dismissed such fancies. He must be getting old to become prone to maudlin thoughts. Besides, the earls of Edgington were bred for better things, or so his father had told him. However, his father had also told him he was a useless fool, and if his wife had managed to present him with a spare as was proper, he would not suffer his eldest son as heir.

Why his father despised him, Edgington didn’t know, but he’d long reconciled himself to the knowledge that his father held no affection for him, and he’d found delight in living down to his opinion of him. A smirk twisted his lips. The greatest of his perversions could boast inception in his desire to enrage his father and, truth be told, he was a little lost as to his purpose now that the man was gone.

Once, though, he’d thought to have something more. His smirk died as memory curled about him. Once, he’d thought perhaps he was more than the sum of his parts, more than what his parents had made him. Once, someone had looked at him as if he could be better and, for a brief moment, he’d believed her.

However, that was ten years and a lifetime ago, and he’d gone in another direction. Maybe, though … maybe it was time to turn his path. Maybe, instead of his club, he would go home. Maybe tomorrow he’d strategize a new life, one that gave him purpose.

A laugh rang out over the throng. Something about it tugged at a half-remembered memory, something he’d convinced himself he’d forgotten. The hairs on his neck stood up, and he pulled himself straight, straining to look over the throng to find the owner of the laugh. Heart a fast beat in his chest; he skipped over each face and figure, certain he was wrong.

As if magic, the crowd parted. And he saw her.

Cassandra Dean is a best-selling, multi-published author of historical and fantasy romance, and is a 2016 finalist in the Romance Writers of Australia’s coveted R*BY Award. Her latest novel, SILK & SCHOLAR, is book 4 of her popular Silk Series featuring law-loving peeps and their happily ever after. Her next novel will be the final book in the Silk Series, SILK & SCARLET, and she is working on a new series featuring husband-hunting sisters in Regency England as well as a novel where a thief meets his match in a determined lady.
Cassandra is proud to call South Australia her home, where she regularly cheers on her AFL football team and creates her next tale.